Brilliant Recent Posts
Liberals Are the New Bush Democrats
The day the music died
Blogroll Amnesty Weekend 2013
Why Isn't There a White History Month?
Today in Gun Nuttery
Eight isn't Enough
Today in Gun Nuttery
What part of "Bin Laden Determined to Strike in U....
Julian Fellowes is not just elitist, but an appall...
"Give 'Em Head" Harry Strikes Again 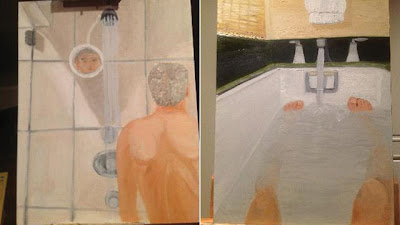 Recently, notorious black hat hacker Guccifier hacked six email accounts, some of them belonging to the Bush family, most notably that of former President George HW Bush. The emails, spanning from 2009 until late last year, reveal fascinating, behind-the-scenes glimpses of the Bush clan and their family friends, including several self-portraits by former President George W. Bush. But out of all the emails that were hacked, ten stood out. What were they?
10) To Brit Hume, 2010: "I swear to Christ, if Barb doesn't get a moustache wax, next time I jump out of a plane, it'll be without a parachute."

9) From George W. Bush to Jeb, December 2012: "Since you were just a Governor, if Pop kicks the bucket, I get the Laz-E-Boy. Pop always liked me best, anyway."

8) From HW to W, October 2010: "Dear son: Just got your advance copy of Decision Points. All these years, I was afraid you would write a terrible wrong and here it is."

6) From HW to W, July 2009: "Son, you have to stop hogging my Laz-E-Boy when you come visiting. I know I was just 'a one-termer', as you derisively refer to me but, unlike you, I was actually elected."

5) From Doro to W, July, 2011: "George, I am so sorry. When you just abruptly sent me your nude self portraits, I was sincerely under the impression they were from Ukrainian pornographers..."

4) From HW to Marvin Bush, November, 2012: "Marvin, you've lived your entire life almost free of the stain of scandal. Needless to say, you disappoint us..."

3) HW to Bill Clinton, 2009: "I remember once having lunch with Pinochet in Santiago in 1990. He pointed to a member of the waitstaff and said, 'You see that girl? Her brother plays for our national soccer team in the same stadium where I rounded up and shot their parents! Small world, eh?' Ah, good times..."

1) From HW to W, December 2012: "Son, sit down before you read this because I have some bad news. You're adopted. When I was off to war, your mother had an affair with Alfred E. Neuman..."
2 comments