Brilliant Recent Posts
Useful Idiots
The Stupidest Staff in Congress
The sociological perspective on navigating in and ...
If He Hollers, Don’t Let Him Go
Yes I am still alive
The News at a Furtive Glance
Blogrolling In Our Time: I Sedionisti edition
Top 10 Reasons For the Pope's Resignation
The rise and fall of prog-talk radio
Around the Blogroll and elsewhere: Now with addit...


Really, people, did Seth MacFarlane ever stand a chance?
Posted by Jill | 10:31 PM 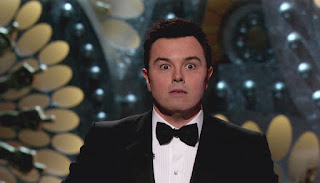 Anyone with even half a sense of humor had to be sympathizing with Seth MacFarlane about an hour into Sunday night's Academy Awards "ceremony", when this year's host clearly looked as if he'd just as soon go to a small bar somewhere and strike up an impromptu rendition of "Come Fly With Me."

Has there ever been an Oscar® broadcast where at least half the jokes didn't fall flat? Where a third of them weren't cruel to someone? Seriously, why the hate? Sure, the "We Saw Your Boobs" song was tasteless, but this is an industry in which one can't be taken seriously as an actress without doing a nude scene somewhere along the line (and Kate Winslet HAS done a lot of them, that's just a fact), while outside of Harvey Keitel and Ewan MacGregor and Jason Segel, how many actors have actually gone Full Monty? And wasn't that the point of the song? The truth hurts, doesn't it, folks? (Also, too.)

It may be that Borscht Belters like Billy Crystal are better able to softly land the offensive joke than the creator of the song "Prom Night Dumpster Baby". It could also be that in an industry full of self-important, self-styled artistes who even in quality fare are still creating popular entertainment, a guy who's made $100 million on fart jokes and cruelty to a sixteen-year-old female cartoon character and who waltzes into the industry and makes a funny movie about an id-dominated talking teddybear that grosses a half a billion dollars worldwide, is a bit too much of a reminder that not even the great Ang Lee is Rembrandt.

Using disclaimers is a time-tested method of cutting off criticism of the past. The comedians Louie Anderson and John Pinette tell fat jokes so no one can say they're fat. MacFarlane used his advance press last night to at least try to cut off the Worst. Oscar. Host. Ever. meme before a Hollywood community and its hangers-on could say it as if it were something new. The opening bit didn't fall as flat as many people seemed to think it did, but it was clear that Seth was playing to an extremely tough room. Yes, he didn't help his case, but there were seven writers credited for this broadcast, and only one of them was named "Seth MacFarlane."

Where the show's producers and writers went wrong was not in letting Seth be Seth, because aside from the aforementioned "We Saw Your Boobs", which has generated the expected pearl clutching from the usual suspects about misogyny and sexism and the glorification of rape culture (no, people, pointing out that even the most serious actresses seem to sooner or later earn cred by showing breasts is not "rape culture"; forcing women to have invasive vaginal ultrasounds after taking RU-486 and coming up with sodomized virgin exceptions are rape culture -- and calling satire the same thing just makes it impossible to address REAL rape culture) and the poor-taste John Wilkes Booth joke, there isn't a single joke that McFarlane uttered that wouldn't have been given a free pass if it had come out of the mouth of Billy Crystal.

No, where the producers went wrong was in building a show around movie musicals, and then not letting the host, who has a magnificent voice and a real feel for the American songbook, sing a medley of songs like "Ya Got Trouble" from The Music Man (and wouldn't he be an awesome Harold Hill?), and "Singin' in the Rain" and "On the Street Where You Live" from My Fair Lady and for Goddess' sake, why didn't they let HIM sing "Razzle Dazzle" from Chicago instead of having Catherine Zeta-Jones' lackluster rendition of "All That Jazz"? Because the man knows his way around schmaltz music, and if they'd just let him use his magnificent singing voice, the press would have sung a very different tune (sorry) the next day.

What Seth MacFarlane did on this broadcast was hold a mirror up to Hollywood, and Hollywood didn't like what it saw. It didn't like seeing a sexist industry in which screenwriters and directors and prodcers whose sexuality hasn't progressed beyond "Look! Titties!" require women to get naked, but not men. It didn't like being reminded at what actresses have to go through to keep their figures and their youth, and of how much it takes to be a Melissa McCarthy or an Adele Adkins and put on an evening gown and dare to be fierce in it. It didn't like being reminded of the trophy dates of George Clooney and of the absurdity of "It's an honor just to be nominated" and of ageism and of how there still seem to be only three roles that are ever written for black men -- the badass, the noble slave, and the "Magic Negro". Seth MacFarlane drew a big fat magic-marker underscore under the reality that the Academy Awards broadcast is a giant, bloated exercise in self-indulgence, in which wealthy plastic people congratulate themselves on being masters of the universe (heh) because they go in front of a camera and play in honest stories of working people as told by rich Hollywood stars. There isn't a host in the world that can "be a good host" because the broadcast itself has become hopeless. Gone are the Sacheen Littlefeathers. Gone are the Michael Moores, daring to make a ferocious political statement on the stage. Gone are Cher in her crazy costumes and Bjork in her swan dress. Now we get a bunch of men in lookalike tuxes, and women who seem all to have rented their dresses from the same prom store. Maybe we can blame Joan Rivers for the irrelevance of everything except evening gowns, but no matter whose fault it is, this broadcast has become as unnecessary and irrelevant as the Miss America pageant.

So what I propose is to stop looking for the perfect host and put the damn thing out of its misery. No one gives a crap about who wins anymore, because it's all been decided already after the Golden Globes (which are a lot more fun to watch), the Screen Actors Guild and Directors Guild Awards, and the Independent Spirit Awards. The Oscar® broadcast is the second biggest anticlimactic event of the television year not called "The Pro Bowl". Oh, we still want to dish about the clothes. So let's just close up this Big Oscar Show, turn it back into a closed reception, and then set up the red carpet outside the Vanity Fair party. Because after all, the only thing anyone really cares about is seeing whatever glorious creation Salma Hayek is going to be wearing anyway.

Wait, the truth that Hollywood is pandering to male demographic usually? That the pressure for women to do this as a 'bold' career move of self-affirmation, rather than what it really is - simple titillation? Yeah, that pretty much DOES hurt women.
2/26/13, 10:44 PM

D. said...
Maybe they can just designate one ugly dress to laugh at and the rest of us can read about it in the morning. (When I lived in your neck of the woods, I would have fallen asleep right after Supporting Actress; eventually I just picked up the next day's paper. Out here, as I discovered a few years ago, the show starts 5 pm and is over at a reasonable hour. But I still felt uncontrollably drowsy after the Best Supporting awards.) Not having to listen to the host is a small price to pay.

Anonymous said...
Thank you for this frank post. MacFarlane scored a direct hit and the hypocritical pearl clutchers' disdain didn't disappoint. I so enjoyed their discomfort.
2/27/13, 7:05 AM