Brilliant Recent Posts
Caturday
Talk about the body not even being cold yet
The measure of a man
The Man Who Would Be King
Citizens, United
Bill, Chris, and Sandy
Meanwhile, at Romney Campaign HQ in Boston...
Around the Blogroll and Elsewhere: Brief Republic...
Vote suppression got them a president eight twelve...
Musings on a Hurricane


Democracy Isn't For Wimps
Posted by jurassicpork | 11:43 AM 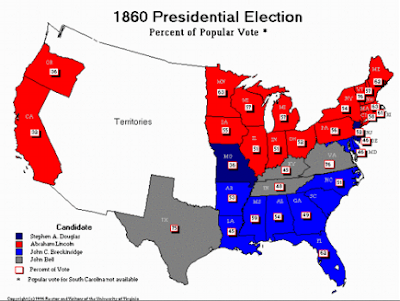 You don't hear me crying, weeping in sackcloth and ashes, gnashing my teeth as if I just had most of my family wiped out in an American mortar strike.

Look, you and I have one thing in common: We didn't vote for Obama. I'd like to think my opposition to Obama getting re-elected and not doing a single blessed thing toward helping him achieve that end is based on the facts and not a writhing nest of paranoid conspiracy theories regarding Kenya and madrassas and Communist ideologies.

But, like John Wayne said about John F. Kennedy after the 1960 election, my position is, "I didn't vote for him but he's my president and I hope he does a good job." I'm not adopting Rush Limbaugh's hateful, seditious message four years ago when he flat-out said, "I hope he fails." I'm not stubbornly refusing to accept reality and trying to drown out the vox populi by screaming, "He's not my president!" Hoping for the president to fail is hoping that America fails. I cannot possibly put it any plainer than that.

Having said that, if you wingnuts don't like the way the elections panned out last Tuesday, if you hold in such contempt the electoral process, please get the fuck out of our country so those of us who still want to help America get out of the ditch into which the Bush administration had driven us can and will.

Whining about greedy, bloated billionaires not stealing the election from virtually nonexistent liberal candidates will not help make America great again. Firing employees, refusing to hire more employees and cutting their hours in a fit of pique because your fellow plutocrats didn't get their way will only further cripple the workforce and put a heavier burden on the social safety net that you'd love nothing more than to permanently shred. You think that's a conspiracy theory? Look at Wal-Mart. We're already there. Democrats and liberals only created a welfare state: Right wingers like the Wal-Mart heirs, who are worth as much as the bottom 40%, make one necessary.

Like many other disenchanted and disenfranchised liberals, I guess I still hold out hope that Obama, like Jackie Robinson after his first two years in the majors, will begin fighting back. Maybe, as with #42, #44 will show his true blue colors and start pimp-slapping a seriously weakened Republican Party that saner people this past November 6th put on notice.

I doubt it but it's possible. And whether I actively cheer the president's policies and agendas or merely hope he doesn't fuck up the country more than he already has, I will not actively cheer his every failure as you hateful, sneering, ankle-biting schoolyard bullies did when he couldn't get the 2016 Olympics in Chicago. When the president fails, we all fail. You, me, almost all of us. And you want this to happen just to prove that people of color cannot effectively govern the United States.

Look at the lead picture above. It shows not much has changed but the political parties of the candidates. Southern states in 1860 supported racist Democratic candidates whereas the coastal states on both coasts supported a man who ended slavery and saved the nation when your ancestors sought to weaken the nation so you could continue owning, exploiting and abusing black people.

Exactly a century after Lincoln's assassination, in my own lifetime, black people were mauled and beaten in the streets of America for peacefully petitioning for the right to vote without having to pass an impossible litmus test even white PhD graduates couldn't pass. You would wish to return us to that even to the point of repealing the Voting Rights Act of that year, even the Civil Rights Act of the year before.

You and the corporations you ignorantly and brainlessly support would even repeal child labor laws in place since the 1830's and put children back in the mills. Or mills we would've had were those jobs not outsourced and offshored by companies such as the one your choice for president once headed.

I've been listening to all your bellyaching at first with amusement, then irritation, to the point where I can no longer remain silent.

I did not vote for Obama and I am proud of that fact. But I respect the voice and will of the people and, yes, Barack Hussein Obama will be my president, and yours, for the next four years and I hope he succeeds. Because, unlike you, I still love this country and what it used to represent and I would love to see us become great again by the end of my lifetime.

So, Ole Miss can riot, you can continue clutching your guns and religion and buy guns and ammo online like so many little James Holmeses. You can threaten to assassinate the President on Twitter and Facebook and elsewhere. But at the end of the day, you always have the option of simply leaving this country if you cannot respect the voice and will of the people.

The trouble with that is, as with hateful white men in the United States, the number of countries that embrace right wing ideologies and do not have "Socialized medicine" are dwindling. Or maybe we'll finally wise up and start another Civil War not because you want to secede from the Union but because we'll forcefully make you secede so you and your own won't have to accept those government handouts like Social Security and Medicare, "entitlements" that you hate so much while cheering on the neverending rise of the military industrial complex that is hollowing out this economy like so many famished piranas.

Maybe Peter Theil will have a place for you in the servant class of his libertarian paradise when he gets around to building it, or maybe you can take your chances and get a job on one of those billion dollar private luxury liners when the people for whom you brainlessly bow and scrape float off into a red polluted sunset.

You right wingers obviously think you can do better without democracy so I say go for it.

But if you cannot accept that Obama will be your president for another four years, if you cannot abide by the will of the majority, there's nothing theoretically stopping you from getting the fuck out. The rest of us have work to do.

Suicide, too, is always an option...
7 comments

Diva said...
Seriously? You did everything you could to convince your readers to repudiate Obama. Played the devil's advocate game rather unconvincingly. Now you want to take the high road? Not buying it.
11/10/12, 2:15 PM

jurassicpork said...
I don't give a shit what you buy, Yankee fan. These are my thoughts and feelings. Unlike these hindleg-chewing wingnuts, I accept the election results. I voted my conscience and am willing to live with the aftermath.
11/10/12, 6:16 PM

Anonymous said...
Pseudoradical intellectual masturbaters across the nation are desperately concerned about your opinion.

The rest of us? Meh.

Beleck said...
lol, these people need to believe what they do. as they say, you can lead a horse to water, but...

amazing how similar the map of the US is from that election to this one. the motto of the state of Kentucky is "United we Stand, Divided we Fall" . i think we are there again.

i sure hope we can make it through the next Calamity. we seem to be having that 2nd Civil War, without having actual Gunfights/Battles like Bull Run and so forth.

i can't wait to see how this Catfood Commission and the Fiscal Cliff works out for all those "true Believers". and of course, i hope i am wrong.

in the meantime. i enjoy your writings. being from New Orleans, i get what it's like to live in a Hurricane zone. things do get better after a while. takes years though to come back to where you were.

at least this time you have FEMA and not "Heckuva Job Brownie" to make things worse. lol.

Raksha said...
Very well said, jurassicpork: "I accept the election results. I voted my conscience and am willing to live with the aftermath."

I did the same, and feel the same way about the aftermath. I was so impressed with your post that I reposted it on a political discussion board where I am a regular. Although I've had two compliments so far from a couple of the board liberals, so far the resident wingnuts haven't said anything. I wonder if they realize just how unpatriotic and (dare I say it?) un-American they really are.
11/11/12, 12:35 PM

Anonymous said...
What about a trade? We will give the U.S. Prime Minister Harper, and we will take Obama.

You just have to agree to be, sold out to Communist China. You have to give all of your jobs to China as well. That way, you won't have to worry about buying, infected electronic components. Your missiles should fire, and your fighter jets shouldn't fall out of the sky. Your secret files shouldn't be hacked into by China. You don't have to worry about, China's aggression to the Philippines.

It's a win, win. Canadians don't want Communist China, right onto our soil. China is already, parked at the tar sands. You take them, we don't want them.

Actually, there are very few politicians, worth the powder to blow them to hell. Any honest politician, are got rid of asap.
11/11/12, 7:16 PM