Brilliant Recent Posts
A thought for Mrs. Petraeus
Note to Republicans: You can't do it
Democracy Isn't For Wimps
Caturday
Talk about the body not even being cold yet
The measure of a man
The Man Who Would Be King
Citizens, United
Bill, Chris, and Sandy
Meanwhile, at Romney Campaign HQ in Boston...


And Now, a Word From Mike Flannigan
Posted by jurassicpork | 5:15 PM 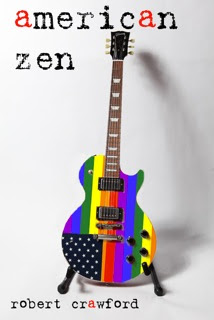 (By American Zen's Mike Flannigan, on loan from Ari and Welcome Back to Pottersville.)

It hasn't been decided yet whether I'm a figment of Robert Crawford's imagination or his alter ego or vice versa. Either way, it could safely be said that I'm the author of American Zen, the story of an epic road trip that took place during a week of my and my friends' lives exactly four years ago. As I'd subsequently described our trip up and down the northern eastern seaboard across four different states (Massachusetts, Rhode Island, Connecticut and New York), it was like a "Flomax/Viagra/Grecian Formula commercial gone hideously over budget."

And, starting the summer the first draft was completed (2008), I'd made Robert's acquaintance and began blogging part time at Pottersville starting with my thoughts on the Democratic and Republican national conventions. Robert (better known to you as Jurassicpork) figured, as long as my editor in chief Ari Goldstein and the liberal magazine that for legal reasons can't be named sent me to both cities on someone else's dime, he'd asked me to weigh in with some impressions. I don't like the idea of writing for nothing (One of my few personal axioms is "Pay the f**king writer!") but in JP's case I'd decided to make an exception.

Then he asked me to write something for his new blog, Kindle in the Wind, one dedicated exclusively to his writing and the art of writing in general. If I was more like Billy Frazee, my old drummer, I would've told him to take a long walk off a short pier and not to push it. Fortunately for JP, I'm not like Billy and I promised to get something off to him in the next few days. "What do you want me to write?" I'd asked him. JP said, "Just be yourself and tell whoever's out there about the 2008 trip and your appearance in my other novels."

So that seems like a logical place to start.

Yeah, to the dozen or few initiated who'd actually bought American Zen, it may come as a bit of a surprise to you that I don't just appear in that particular book but several. Whenever Rob needs an authoritative journalist figure to handle backstory, exposition or whatever, he usually turns to me (and, in one notable instance, my EIC Ari Goldstein in an upcoming novel). Not including American Zen and the sequel, American Zen II: Rock of Ages (begun years before that execrable Tom Cruise movie), I've actually appeared either in print or over the telephone in three other of Robert's novels.

His other Kindle novel, The Toy Cop, you know about. In the older drafts, I didn't actually make an appearance until Robert was doing the final revision and thought it would be a good idea to write an Op-ed I'd "written" for the New York Times about capital punishment. Since I have some small fame (alright, infamy would be more the word), I agreed to let JP use my name for the sake of authenticity and, for someone who isn't a real journalist, he did a pretty creditable job in not only penning a fictional article but even in coming close to reproducing my voice. I thought that would be the extent of my involvement with his novels.

But then JP got an idea and he ran it by me a couple of years ago. He began by asking me, "Mike, have you read any Isaac Asimov?" I told him I had, at least back in my callow youth that stubbornly refused to end until I hit 35-40. Robert reminded me that toward the last decade or so of his life when he was writing faster and faster, Asimov attempted to tie together his three great series, the Robot, Empire and Foundation novels, into one gigantic cycle. One way to keep all those novels and short stories in the same universe was to use common characters and reference historical events of one series that would actually impact, however incrementally, on others.

I immediately saw, sort of, what he was getting at. His idea was to use me in several series that he's planning, which would be the proposed American Zen series, The Toy Cop (he'd begun a sequel over ten years ago before the first one was even finished) and his new series (a trilogy of novels that are each well underway) of a Russian/American ex cop named Joe Roman. That way, all the protagonists, through me, would inhabit a common universe and his dream was to one day, if his writing career ever took off (are we listening, lit agents?), to write one epic adventure involving yours truly, Penny "The Toy Cop" Gallagher and that semi-benevolent psychopath known as Joe Roman.

I said, "Sure, go for it. You can't sully my reputation any more than I and the sociopaths in the Republican Party already have," and the rest is becoming history.

With money worries and the pressure of finding that ever-elusive job after nearly four years of unemployment, plus all those other duties we all have to meet to sustain human life, it can't be easy for poor Rob and I can only imagine what he's going through just maintaining his household and keeping body and soul together, let alone cobbling together a massive cycle of novels in his spare time (not to mention his noted work at Pottersville).

Although it takes six weeks to two months for him to get from Amazon his piddling royalties (if at all. He can't publicize them on Amazon's website because the good sons and daughters of Jeff Bezos effectively muzzled Rob for life almost a year and a half ago because he tried to sell his Kindle novels on the biggest book selling site on earth. Go figure how that's a violation of their TOS), you'd be helping out my buddy Rob and would certainly boost his always flagging self-esteem if you would buy either novel (both of which providing links to his product pages) and to start frequenting this fledgling blog and his dedicated Twitter account.

Because we writers have to stick together and it can't be said that a lot of established writers have gone out of their way to help out poor ole JP, who's a talented scribe (and a formerly agented one in a slightly less competitive and media-consolidated day and age) in his own right.
0 comments