From Trayvon to Sharlene
Posted by jurassicpork | 11:33 AM

Being a writer of no mean talent, it outraged me, as I'm sure it had other real writers, that Juror B37, as she's been dubbed, got signed by a literary agent within hours of last Saturday's verdict. The turnaround time between the jury's verdict being read and the announcement of this deal was breathless and audacious even for a nation of money-grubbing, sociopathic opportunists like the United States. Sharlene Martin's catapulting of her body from Seattle to Florida would've made an ambulance-chasing shyster green with envy.
It seemed to be yet another case of yet another literary agent signing yet another moron to a book deal and risibly trying to get us to believe they'd actually write their own book and not have it written for them through an appointed ghost writing hack, like W's, Sarah Palin's, Christine O'Donnell's and so many others while real writers of real talent who really write their own books continue getting form rejections from flunkies.
Then, just 14 hours after this "coup", we saw this on Twitter:

After careful consideration of the book project with Zimmerman #JurorB37, I have decided to rescind my offer of representation.
— sharlene martin (@sharlenemartin) July 16, 2013

Yeah, sometimes the clouds do part, the demons retreat back into their smoking, glowing fissures and sometimes common sense prevails or at least seems to. Because, just before Sharlene Martin, literary agent provocateur, made her heavily retweeted communique on Twitter, this emerged from her client, Juror B37: 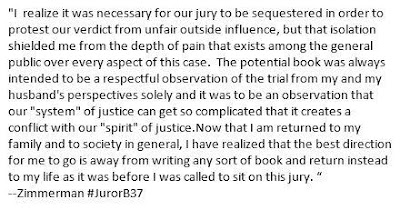 Hm. Sounds to me as if the client rescinded the agent and not vice versa. Perhaps it had something to do with the enormous online backlash after Juror B37's Sarah Palin-class Hindenburg of an interview with Anderson Cooper on AC360. Either way I guess America's most infamous anonymous juror realized the 15 minutes of bright lights weren't for her. Or maybe Sharlene Martin honestly realized what a disaster in the making such a professional association would involve. Or maybe Martin realized she'd leaped before she looked and remembered Paula Deen and how difficult it is to sell a book these days by a racist whose name isn't Rush Limbaugh.
Because Juror B37 and her unbelievably stupid comments about "boy of color" Trayvon Martin and that she honestly believed the police dispatcher wanted Zimmerman to pursue Martin pretty much branded her as a racist, an inattentive moron and possibly guilty of compromising the jury. Note the part where she says, "The potential book was always intended to be a respectful observation of the trial from my and my husband's perspectives solely..."
Was she in touch with her husband while the jury was sequestered?
We'll never know the full reasons for the pulling of the plug even before the ventilators began any more than we'll know how a jury of six women could be so divided (Two wanted manslaughter charges and one wanted a murder two conviction) yet turn into a unanimous acquittal. But literary agents such as Charlene Martin are chiefly responsible for not only the tawdry state of affairs in publishing but are symptomatic of the moral rot that's hollowing out this once-great nation.
I would've gotten physically ill if I'd heard that George Zimmerman got signed by a literary agent. But at some point one must accept some moral rot and opportunism is to be expected in this free market-dominated nation of ours and, in a twisted way, it would've made sense. Zimmerman, after all, was the defendant in one of the most sensational murder trials of the year. It would've made greater sense to approach the Martins (Trayvon's parents) with a book deal and offer of representation so they could offer their thoughts on the trial and son's murder.
But no. Sharlene Martin essentially hurtled her body, pen and contract in hand, all the way to Florida to sign one of six jurors who, I think we can be reasonably assured, is the stupidest and most racist one on the whole jury. It shows that even when following those brutally insensitive instincts for opportunity, some agents don't even aim high and are content to pursue the tawdriest, sleaziest book deal imaginable.
She could've approached the grieving parents, had a ghost writer with some integrity turn their thoughts and feelings into a lasting work that virtually any publisher outside of Regnery or Threshold would've been proud to put out. Instead, Sharlene Martin, the most loathed literary agent on the planet today (which is quite a feat, considering) chose to aim for the cheapest, most sensational flash-in-the-pan imaginable, so her client could get a huge advance that wouldn't have a prayer of earning itself out, so she could get 15% of that and, in the process, becoming yet another scum to capitalize on Trayvon Martin's murder.
1 comments

Syrbal/Labrys said...
That interview was a Hindenburg, alright....her continued protestations of race having naught to do with it was like rape apologists going on about the victims being in the wrong place and thus to blame. And referring to Trayvon's friends as "they" and "how they live".....are we no longer giving primers on what racism SOUNDS like; cause that moron seems to believe her claims about not being racist.