Brilliant Recent Posts
A Very Good Cat.
Time to start sending used tampons to the government
They want it all...and they want it now
Shorter Jim DeMint: Wimmenfolk don' know nuthin' ...
Top 10 Reasons Paula Deen Got Fired by the Food Ne...
This Week in Assclownery
Dred Scott Was Also a Criminal
Old Jewish Retailers
What Was Michael Hastings Working On?
Scorsese goes back to the Goodfellas well again 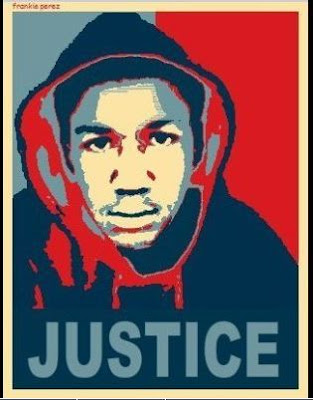 I have two friends at work, "Sam" and "Cheri" (not their real names). Sam is in his forties, from an affluent black family in the south. Cheri is from the Caribbean. Both have white spouses and mixed-race children. Sam is often described as "having no boundaries." In this particular individual, that's a good thing, because you know with Sam you are always dealing with an honest broker. It also makes for a lot of no-holds-barred discussions about race.

We often joke around about it. Sam calls Cheri "Blackie" without impunity. They poke gentle fun at my inability to move my head like an angry black woman does. Sam will joke about how if I go to "the 'hood", people will get out of my way because a short middle-aged white woman walking around the hood must be batshit crazy. There's an honesty to this interaction, but I know it is only to a point. And frankly, I wonder how they will bear to look at me -- or anyone else of my race -- tomorrow.

It's easy for us good white liberals to think we are sensitive about race relations. But we do not know what it's like to be pulled over again and again for minor traffic infractions like accelerating on the shoulder of a highway that everyone does. Sam knows that when he is pulled over, he is to keep his hands on the steering wheel until cleared to move them by the officer that pulled him over. Cheri knows that a hundred drivers will be ignored by police for talking on a hand-held cell phone but she will be pulled over. As she said to me not too long ago when I mentioned something heinous that George Zimmerman's defense said, "So? I've been under the bus so long I'm used to it."

It isn't that we didn't know George Zimmerman would be acquitted. From the very beginning, this case was less about evidence than it was about "He said....he said" -- except one of the "he"s is dead and can't speak. Zimmerman made sure of that. He made sure that only HIS story would ever see the light of day. And so today, a seventeen-year-old who was an "A" and "B" student, from a college-educated family with a brother in college, who went to a convenience store to buy candy and a soda for a young relative, lies six feet under the dirt, and his murderer walks free -- free to continue to rake in money from the pencil-dick phony tough guys who populate Fox Newa and talk radio. Free to believe he can rid the world of people he deems to be a problem with his gun. Free to do it again.

How on earth can we go on as a nation? How can we continue to live like this? Five years ago a black man stood on the steps of the Capitol and took the oath of office of the Presidency of the United States. And while liberal America was patting its own back at this great achievement, the giant rock that had covered up the racist, rotten core of the red states was turned over and all the hate and bile that had lain dormant during the Reagan and Bush years and during the Clintonian Sister Souljah interregnum, came spewing out. "Kenya" became code for "the 'N' word". "Anti-colonial" became code for the "N" word. Birthers were simply saying "Can't you see that man is a ni--?". "Voter fraud" became code for "Ni----s are voting, we have to stop them." So were the others who talked about racial preferences and Michelle Obama's derrière and circulated photos of Obama's face photoshopped on some Disney idea of an African indigenous tribe member.

And then just a few weeks ago, no less than the Supreme Court decided to look at that period of dormancy instead of the reality that has black neighborhoods stiffed on voting machines, black names purged from voter roles, Voter ID laws, mass vote suppression of all those who might vote against racism and hate and white supremacy. John Roberts and Samuel Alito ushered in the new Jim Crow era, after making sure that the country was set up to ensure that those who could enforce it were ensconced safely in their Congressional seats for life.

We don't know what Trayvon Martin could have been. He could have succumbed to the streets, or he could have gone to college and graduate school and invented something to make fossil fuels obsolete. He could have become a drug dealer or a doctor. He could have been a deadbeat dad or the doting father of his children and a loving husband. We don't know, and now we never will. But he deserved the chance to choose his own destiny, not to have it taken from him by a loser with doubts about his own manhood who thinks shooting an unarmed kid holding a bag of candy and a soft drink makes him somehow a tough guy with a big swinging dick.

We used to look at photos of Emmett Till and think it was years ago. Now we have our own Emmett Till. We should all engrave Trayvon Martin's face into our brains for all the time we are on this earth. Because until we the people do something about laws that let assholes like George Zimmerman declare open season on black teens, his death is all of our shame.

jurassicpork said...
We don't have Stand Your Ground laws in Massachusetts. But I've texted my biracial sons and told them to be careful. We have many more racists in MA than most people realize.
7/14/13, 2:31 PM