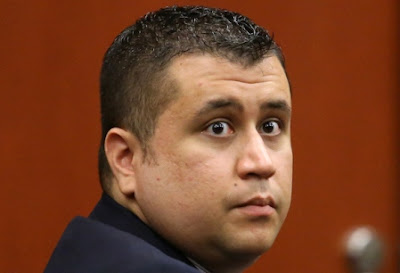 You just got away with murder! Where are you going to go next?
"I'm going to Paula Deen's Lady and Sons Restaurant!"
Now that Trayvon Martin's rotting corpse has been convicted of Walking While Black, what are we to learn about the criminal justice system in the Land of the Free, Home of the Brave?
Well, first of all, we've learned that hulking white men with guns and a criminal record of violence can stalk, accost, assault and kill unarmed black youths in Florida, use the Stand Your Ground law (Thank you, Jeb) and get away with it. Secondly, it also proves the same law that's been successfully used in that same state by old white men with erectile dysfunction doesn't necessarily apply to black women who don't kill anyone but merely fire warning shots in a wall to scare off an ex who'd violated a restraining order and broke into her home.
And that, if you're in Texas, you can use the even more NRA-friendly "Shoot to Kill to Get Your Whoring Money Back" law.
George Zimmerman's acquittal last night by a jury of six women shows that laws and One Size Fits All mandatory sentencing can not only be perverted and twisted but that such contortions are almost invariably predicated on purely racial lines.
Let's take stock from the travesties we've seen just this past summer: George Zimmerman, a large white man, stalked and shot to death an unarmed African American youth who had both hands occupied with Arizona Iced Tea, Skittles and a cell phone. The boy was on his way back to his father's house after a trip to a convenience store and was going to continue watching a football game. Zimmerman, a self-appointed vigilante (NOT a "neighborhood watch captain", as it's been wearisomely reported in the MSM, especially ABC News), called the police and was told by the dispatcher to stand down.
He then accosted the youth, who was understandably alarmed a white man with a gun who wasn't a cop was following him and acting in a confrontational, hostile and threatening manner, defended himself when Zimmerman assaulted him. The corporate mainstream media, as per its usual standards, then decided to give credence to racists and NRA gun nuts (not that there's any degree of separation between them) by trying Trayvon in the media for being a thug, a tactic used successfully by Zimmerman's attorney, Don "Knock Knock" West.
We were treated to pictures of guns on Martin's cell phone, Martin's middle finger, Martin in a hoodie, Martin's gold tooth caps, Martin's alleged hostility on the day of his death, Martin smoking pot. Yet, we'd heard precious little about Zimmerman's history of racism, domestic violence and attitude problem toward law enforcement. It was plain that the MSM, which will always portray black people as perpetrators both real and imagined and almost never as victims, put Martin on trial in the court of public opinion.
And a jury of Zimmerman's peers decided a large vigilante with a gun is justified in killing an unarmed teenager as long as he gets to wave the "I was in fear of my life" defense.
Earlier this summer, Marissa Alexander had gotten a restraining order on her abusive ex husband just nine days after having his child. He'd broken into her home and in the process, violated a restraining order and began acting in a hostile manner. Marissa, after repeated attempts get him to leave, then grabbed her pistol and fired a warning shot into a wall.
The jury took all of 12 minutes to convict the black woman, who then automatically got 20 years under Jeb Bush's 10/20 mandatory sentencing laws that were originally written for liquor store robbers and spree killers, not single mothers fearing, like Zimmerman allegedly was, for their lives.
ALEC and the Koch brothers have Trayvon's blood on their hands for the bottomlessly absurd and endlessly despicable Stand Your Ground laws, another wonderful legacy from Jeb, that have essentially been successfully used by white racists such as Zimmerman while being denied that defense by people of color. Stand Your Ground, and the Zimmerman exoneration, have essentially declared open season on African Americans who may think about breaking an unwritten law in Florida now known as "Walking While Black."

Addendum:  Mrs. JP reminds me that Stand Your Ground was not invoked in the Zimmerman defense, a fact of which I should've been cognizant as that fact was reported in the NY Times last month.

Grung_e_Gene said...
The Defense made this about the Scary Black Guy. It didn't matter that Zimmerman didn't know any of the Smears about Trayvon's past because the Defense was going to run on Martin is suspicious precisely because he's Black.

The Reactionary Right-Wing has been stoking the fears of the Blah People every chance they get.

Syrbal/Labrys said...
Thank you for the vehemence I was too inarticulately pissed off to exercise. I know the defense didn't use the "stand your ground" bullshit....but face it, without that one on the books, Zimmerman would not have felt so "empowered" to be a murderous racist asshat.
7/15/13, 4:15 PM

Were you ever a fan of due process? Just askin'

“The jury acted within the letter of the law, I guess, if you want to be official about it, and acquitted Mr. Zimmerman of both second-degree murder and manslaughter charges,” said legal scholar Jeffrey Frazier about Zimmerman’s culpability in the events of February 26, 2012, which, trial or no trial, have been pretty clear all along, right? “Mr. Zimmerman did not violate any Florida state laws—although, please, give me a break—and is an innocent man, I suppose, if you’re sticking to the strict legal definition of that word.”

“And thus, this trial was properly conducted in full accordance with the U.S. justice system,” Frazier added. “For whatever that’s worth.”

“I ask every American to respect the call for calm reflection from two parents who lost their young son,” said Obama in an address Sunday, sighing. “We are a nation of laws, and a jury has spoken.”