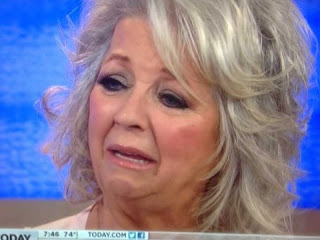 Iconic southern cuisine chef Paula Deen has become the 21st century's Typhoid Mary for certain admissions that she'd used the "n" word and having once planned a slavery-themed wedding. This had prompted Miss Deen to plead her case to Matt Lauer yesterday in which she accused others of telling lies about her by citing her own words in a court deposition for a discrimination lawsuit and being out to destroy her. Deen ended the interview by defiantly saying, "I is what I is and I'm not changing." Since the admission, Deen has been dropped by Novo Nordisk, Target, Home Depot, the Food Network, Wal-Mart and Smithfield. (The news isn't all bad, as Fox News hastens to remind us: Deen's new cookbook, The New Testament Cookbook, just shot up from #18 to #1 on Amazon, even though it's not due to come out until October.) Aspiring writer Anne Rice also came to Deen's rescue, asking if we "had a lynch mob mentality." Deen's admissions that "of course" she used the "n" word and the slavery-themed wedding were bad enough but weren't the only ones in her deposition, What are some other self-confessed examples of Paula Deen's racism?