Brilliant Recent Posts
Yes I am still alive
The News at a Furtive Glance
Blogrolling In Our Time: I Sedionisti edition
Top 10 Reasons For the Pope's Resignation
The rise and fall of prog-talk radio
Around the Blogroll and elsewhere: Now with addit...
Top 10 Emails Hacked From the Bush Family's Email ...
Liberals Are the New Bush Democrats
The day the music died
Blogroll Amnesty Weekend 2013 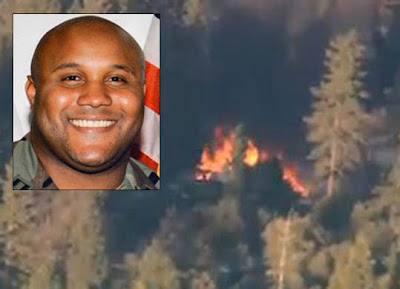 (By American Zen’s Mike Flannigan, on loan from Ari.)

“The only way the American Negro will ever be able to participate in the American way of life is by a series of acts of violence-it’s tragic, but it’s true.” – African American author Chester Himes

“The white spectators were fortunate that there were no blacks among them, despite the accidental casualties, for had these irate, nervous cops spied a black face in their midst there was no calculating the number of whites who would have been killed by them accidentally.” – Chester Himes, “Prediction”

Chester Himes, one of America’s greatest authors of the 20th century, can be considered a prophet if the definition of a prophet is the ability of one to survey the lay of the land and predict trends or even to just latch on to certain behaviors that renew themselves decade after decade.
In 1969, Himes had published a neglected short story, a gory affair entitled, “Prediction”, which was about a black sniper who takes on 6000 invariably white cops in a parade designed to show racial unity in an eponymous American city. To anyone who follows true crime in 20th century America, it seemed to presage the week-long massacre that took place in New Orleans a little over two years after the publication of “Prediction” at the hands of Navy veteran Mark Essex. In early 1972, Essex shot several officers and civilians and he’d single-handedly held the NOPD and a military chopper at bay for several hours before exposing himself to over 200 rounds. Nowadays, it would be considered an act of terrorism.
The narrative the press and authorities had given is that Essex was some loonie black militant without seemingly exploring the reason for his racially-motivated rage (he’d allowed three African American chambermaids at the Howard Johnson Hotel to leave, explaining he was there to kill only white people). But the fact was, Essex was sick and tired of the racial prejudice permeating the military and the Navy in particular as was fellow Navy veteran Christopher Dorner. Both men put on uniforms in racially polarized environments while naïvely expecting their competence alone would give them a fair shake.

Dorner wasn’t any more a black militant than the San Bernadino Sheriff’s Department that plainly gave the order to burn down the cabin into which he’d holed himself. Police band chatter betrays sheriff’s deputies calling for the “burners” the press had been told were mere tear gas canisters (as we were told after Waco) and had indisputably made the decision to watch the cabin burn without the intervention of the Fire Department until Dorner died. It was an execution, plain and simple. As Samuel L. Jackson said at the end of Die Hard 3, "Fuck him, let him cook."
Both rampages were fueled by an incendiary hatred toward police officers and Dorner’s was necessarily one nurtured as an insider. And when these self-styled vigilantes murder innocents, as Essex surely did and which Dorner allegedly had, it’s impossible for any but the most misguided bleeding heart liberal to see beyond that and vilify the person, even commending the pertinent police departments for a job well done.
But in both cases, there was no serious examination into the provenance of such racially-motivated hatred and no one who wants to keep their job in the mainstream media will ever publicly opine that such racially motivated hatred is not self-sustaining and self-conceived but a reaction to entrenched bigotries and hatred that was established and institutionalized long before Christopher Dorner or Mark Essex were even born.
What distinguishes the Dorner case is that the press was held at bay so as not to give the gunman a strategic advantage by monitoring law enforcement’s movements outside. That makes for a very convenient excuse and one has to read the news accounts very thoroughly to hit upon the realization that the cabin in which Dorner had made his last stand had neither television, a phone line or internet access. And during the final siege before the order to torch the cabin I think it can be posited that Dorner was too busy fighting off law enforcement that was there to kill and not arrest him to be checking up on himself with a smart phone. Essentially, the ruse worked because the MSM, after a simple request from the LAPD that had no jurisdiction at Big Bear, fell down like parishioners at a Benny Hinn revival and did their bidding.

The Angry Black Man is Coming to Get You
One of the most fearsome stereotypes of White America is the meme of the Angry Black Man. The genetically racist right wing tried that tack in 2008 during Mr. Obama’s presidential campaign and failed miserably with it. It’s a virtually atavistic fear going back to the Amistad uprising, Nat Turner’s rebellion and Rosewood all the way down to the Rodney King riots just over 20 years ago. And underpinning this fear is guilt and insecurity because African Americans will learn and never forget the history of their forbears. It’s a macroscopic version of a father who molested his child when they were still very young and innately knowing the day of reckoning will some day come.
It’s always much easier to point the finger of blame at so-called black radicals who take innocent lives than it is to point it at white police officers and Naval personnel who anecdotally engage in racist behavior that results in occasional black rage. Racism has always been a part of the American psyche since the days of the earliest colonists and succeeding generations grow up believing it’s an inevitable fact of American life.
We don’t know the name of Himes’ sniper, his background or the reason for his rage at white people, especially the police, and Himes didn’t think he needed context, as if black rage was also an unalterable fact of American life (and, for the time being and for a time to come, I fear, it is). But after reading “Prediction”, one gets the sense the onus for murdering innocent people will be squarely and exclusively placed on the sniper and his dead body just as it had on Essex and, most recently, Dorner.
Forgotten was the fact that, in Dorner’s case, the LAPD was engaging in reckless vigilante behavior that only validated Dorner’s claims in his manifesto published on Facebook. Two small Asian women were shot by the LAPD and a white man driving a pickup that only very superficially resembled Dorner’s was also shot at. In fact, in Himes’ prescient short story, the urban police department began wildly shooting with a 20 mm cannon that took out 29 of their own officers and wounding another 117, not including civilians in the crowd.
This is also another fact of modern day American life because, as with the rest of us, law enforcement in America responds to civilian opposition out of paranoia, hatred and a reckless frenzy that inevitably gets a free pass from their chiefs, sheriffs, commissioners, the mainstream media and, ultimately, the American public. As long as the bad guy gets it, the ends justify the means, especially if we the news consumers don’t lose anything in the process.
The ineluctable revelation that one cannot help but take away from this latest police debacle is that A) Christopher Dorner never had a chance. There was one rule of engagement and that was terminate with extreme prejudice whether it be by bullets or blazes. Dorner, however briefly, placed a burning spotlight on the well-known racism of the LAPD and he knew too much. And too many people would've listened to him during a trial. B) No serious examination of the racial prejudice that resulted in Dorner’s jihad against the LAPD and San Bernadino Sheriff’s Dept. will ever be done, which in itself was perhaps the biggest overarching rationale behind Dorner's rampage. We all know how effectively the police police themselves and no possibility of racism, cover-ups or incompetence can even be hinted lest it causes public distrust and paranoid hatred to erupt into actual riots and rebellion. The only thing the LAPD consented to look at again was not his charges of racism against his fellow officers but the circumstances surrounding his dismissal, a revisit that obviously will let the original verdict stand.
And, in our heavily-regulated and repressed country, it’s easy to understand if not actually endorse the mindset of those who were secretly or even openly cheering on Dorner because the seductiveness of the outlaw taking on a corrupt system is an irresistible one since the days of Robin Hood. That would be a very misguided endorsement as Dorner allegedly killed four innocent people.
Yet another inevitable fact of American life, one that needs to change immediately before more innocents are slaughtered, is it’s easier to choke off accountability at the outlaw’s level and to not examine the institutionalized and viciously protected racial bigotry that makes impotent minority outrage explode into outright violence.
1 comments

Cthulhu said...
Dorner had a choice. The internet alone could have been used as a bully pulpit to bring public pressure and attention to his cause.

Instead, he picked up a gun. With that act, he violated every oath, every precept he'd sworn to uphold every day of his adult life. And when he picked up the gun, he didn't go straight on at the LAPD or the lawyers he felt betrayed him, he went after the lawyers DAUGHTER. And in that moment, he made himself a terrorist and a coward. He threw away any credibility and decency he might have had.

As a white male, I cannot IMAGINE the hell of being a black male in this nation. As an ex cop, and an ex sailor, I know I've seen the racism Dorner raged at.

And yes, it probably took a lot to make him snap. Or maybe the LAPD saw that he was unstable, and made the right call to remove him from the streets.

But the bottom line is, Dorner had a CHOICE in his actions, and he chose the way of the craven and the coward.

And thanks to his choice, we have NO hope of turning the spotlight on the LAPD and the overall racism that still runs all too rampant in this society. And thats a damn shame.
2/23/13, 11:54 AM
Post a Comment
<< Home
Contact
Home
Email:
brilliantatbreakfast at gmail dot com
RSS