Brilliant Recent Posts
Why Isn't There a White History Month?
Today in Gun Nuttery
Eight isn't Enough
Today in Gun Nuttery
What part of "Bin Laden Determined to Strike in U....
Julian Fellowes is not just elitist, but an appall...
"Give 'Em Head" Harry Strikes Again
Mama's got a brand new bag
We already know we're fat, thank you very much
You have meddled with the primal forces of nature.... 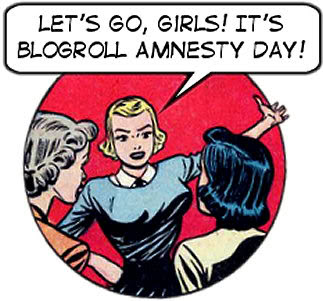 Actually, it's Blogroll Amnesty Weekend, but I'm a bit late to the party. As regular readers who pay attention to tags know, here at B@B, every day is Blogroll Amnesty Day. This has become ever more important as blogging has become something of a dying art, replaced by Twitter, which limits the expression of ideas to 140 characters. I know that English teachers everywhere may have thought that anything which encourages brevity is a virtue, but unless your name is "Oscar Wilde", you can't really be clever, or witty, or informative in 140 characters. Twitter has its place (thought I still haven't found it, despite having finally succumbed and signed up), Facebook is a good place to pontificate in short-form to your friends and colleagues, but for me, the writing's still the thing.

Besides, Blogroll Amnesty Day is a nice subversive way to poke fun at Atrios, who's sort of the John McCain of blogging -- a guy who got there early on, built a reputation off of being one of the few shows in town, and then pulled up the rug behind him, purging his blogroll of all but his own puffed-up, artificially-important other early adopters, and then not maintaining the blogroll he has left.

But perhaps most importantly, Blogroll Amnesty Day is a way to remind the world that the late, great Al Weisel existed; a guy that some (alas, not me) knew personally and others knew from his own ferociously funny blog, which still stands today as a testament to a man whose generosity of spirit knew no bounds. It isn't that Al is the only one of the fallen that should be memorialized; not a day goes by that I don't wish fervently that Steve Gilliard were still around with enough ranting about the last four years to fill a book. But in creating Blogroll Amnesty Day -- a day (or in this case an entire weekend) to share a Blogger Beer with others who despite lack of traffic and often lack of time, continue to toil away in long form, Al left a greater mark on the blogosphere than Atrios ever will. So here are some selections from our own still-expanding (and yes, occasionally contracting as people move on) blogroll, as well as some new additions.

Bob Rixon is sort of a Bruce Springsteen of New Jersey blogging. With his penchant for vintage postcards and other images, interspersed with musings on life, politics, and the personal, no one better encapsulates the Garden State than The Rix Mix.

I've known Elayne Riggs longer than I've known anyone outside my family, and that includes Mr. Brilliant. Elayne was a macher in 'zine culture long before the word "blog" even existed. For sheer dogged persistence in tracking down Teh Silly every single day, nothing beats Pen-Elayne on the Web. And do NOT miss Friday's posted video, it's hilarious.

I can't say that this is a "smaller" blog, because Pam Kueber is making a living off of it, but for those of us trying to marry Arts & Crafts style into our 1958 homes, Pam's unadulterated love for midcentury modern decor at Retro Renovation is contagious.

Now this is my kind of blog. Channel Surfing's subtitle is "A blog about politics, poetry, sports and music."

Again -- not exactly linking down, but she's my sister and don't argue with her. Astrology is a lot more than Jeane Dixon's horoscope in the New York Post. I never bought this stuff either, but for the last two years, Lynn has been running my planetary charts and has been pretty spot-on about everything, including the approximate time of our mother's demise (only missed by about a month). Last time she ran my chart (last summer), she predicted some unresolved grief coming to the surface probably around March of this year, which is exactly when I sense that our mother's death will hit me then and I will probably be unable to drag myself out of bed for a week. Astrological Musings also says that Mercury turns retrograde on February 23. So back up your computer before then.

UPDATE: How asleep was I when I originally wrote this that I neglected to mention that the great Skippy is now the keeper of the B.A.D. flame. So go visit him for a complete roundup of the roundups.

Bob said...
I'm flattered. I'm slightly older than Bruce, was aware of his existence when he was in Steel Mill & I was mainly playing Rutgers frat houses. He clearly had more talent, better equipment & a stronger work ethic than me. When "Greetings" was released, even before I had cracked the shrink wrap, it was like a door slamming shut. That image, that connection to Jersey, the implied "f*ck you" to New York & L.A. in that album jacket could only be done once, & he had done it.
2/5/13, 12:18 PM
Post a Comment
<< Home
Contact
Home
Email:
brilliantatbreakfast at gmail dot com
RSS