The Fuller Brush Off
Posted by jurassicpork | 2:19 PM 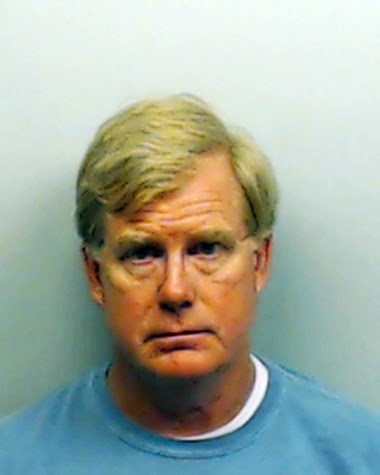 (By American Zen's Mike Flannigan. on loan from Ari.)
"I reached this difficult decision after consulting with my family, and deciding that it was in everyone's best interests to put this incident behind us." - Judge Mark Fuller, through his lawyer on his "difficult decision" to evade justice for beating his wife.

On the same day Michael Brown was getting shot six times for Holding Up His Hands While Black, a white man was savagely beating and kicking his wife in a hotel room at the Ritz Carlton in Atlanta. According to the police report,


“Immediately upon entering the room, there was a strong odor of an alcoholic beverage coming from the room,” the officer noted. He found Fuller lying in bed. There was broken glass next to the night stand and strands of hair on the floor next to the bed. Fuller’s wife told police officers that the assault followed an argument about “issues in their marriage.” The wife explained that she accused Fuller of having an affair with his law clerk. She said Fuller pulled her hair, threw her to the ground and kicked her. She told police that Fuller dragged her around the room and struck her in the mouth several times with his hands. When police asked Fuller how his wife got her injuries, he told them that his wife attacked him after their argument about marital infidelity. He told officers he was in bed watching CNN and she came into the room making accusations. Fuller said his wife threw a glass at him. Fuller said he grabbed his wife’s hair “to defend himself.” “When asked about the lacerations on her mouth, Mr. Fuller stated that he just threw her to the ground and that was it,” the report says. Police later discovered blood in the bathroom on the tub. Fuller did not have any marks or bruises, the officer noted. After medical personnel arrived, they noted additional bruises on his wife’s legs.

There's a lot to take away from that largely paraphrased police report. The place reeked of booze, there was broken glass everywhere. There was blood in the bathroom. And loose hair.
Yes, I said loose hair.
And it was all the victim's fault, according to her own assailant who was resting comfortably on the bed when police arrived.
What makes this particular domestic violence incident noteworthy was not merely that it involved a white man but a powerful white man named Mark Fuller, a federal judge installed by George W. Bush and eight years ago was the right wing judge who'd presided over the Don Siegelman/Richard Scrushy trial that sent those two men to prison.
Well, four days ago, Judge Fuller reached the difficult decision to opt out of being fully prosecuted for domestic violence so he could have his cases diverted while attending once a week counseling sessions for domestic violence for 24 weeks. In other words, His Honor courageously confronted his addiction to beating women during this glorified intervention by taking the Affluenza way out.
By the way, far from being the one time offense that Fuller and his shyster are making this out to be, less than two and a half years ago, on May 10, 2012, Fuller's first wife filed for divorce, citing the following crimes:

Fuller's lawyers requested the records be sealed. The judge actually agreed, even though divorce records are generally open to the public.
Because, you know, white.


"I'm the Victim in all this!"
Nowhere in the countless articles I've read about the Fuller arrest that's only making national headlines one month to the day after the original incident have I heard even the slightest mention of justice for his wife, the other victim in all this. The overwhelming impression one takes away on reading these accounts is of a privileged white man in a powerful position on the federal judiciary who feels he can get away with whatever he pleases while accepting no accountability and lying to law enforcement about his crimes.
This is a picture of a serial wife beater and philanderer, a one man crime wave who was called on infidelity by his first wife (probably involving the later second wife) and got beaten for confronting him. The second wife got beaten a month ago for calling him on his infidelity with his law clerk (wife #3?). Yet, what did Fuller's shyster Barry Ragsdale have the gall to say in court?
"He doesn't have a drug or alcohol problem and never has."
Note that the judge fell for it because in the pre-trial diversion, Fuller was sentenced to 24 weeks in a program for spousal abusers by a private counseling service (That's right. Not even one in the public sector but the private sector), not a treatment program for what's an established history of alcohol and drug abuse.
It goes without saying that Fuller's a Republican since he was appointed by W to the federal judiciary. But one doesn't even need to know that to unerringly come to the conclusion that Fuller's a right wing nut job of the first magnitude for his statements to the police, to the court, to the media and his entire attitude. He attempted to minimize his crimes, blamed his wife for assaulting him and then had the chutzpah to act as if it was a supreme sacrifice and act of courage to duck the law by going into 6 months of private counseling sessions while he enjoys a paid vacation.
No doubt, he'll be allowed to sleaze his way back on the bench after his six month paid vacation so he can dispense to others the same justice he himself has evaded time and again for the same heinous crimes and without his substance abuse problems even being seriously addressed, much less treated.


"You're all out of order!"
One of America's, and the far right's, greatest failings is in not recognizing disturbing patterns. We tend to treat domestic violence, spousal abuse, white privilege, racial profiling and police brutality as mere isolated incidents, unconnected dots that draw no picture although the resolution of these pictures is getting clearer and clearer with each day. It's one thing to connect the dots. It's another thing when there are so many of them, they can draw a picture without conscious attempts at connectivity.
Time and again, we hear of white people marching through stores with machine guns, even threatening people at Little League games, without even being asked to leave. Yet time and again, we hear of police gunning down unarmed black men and justifications from our most racist elements that somehow, in some vague way, they had it coming to them.
Time and again, we hear of black men with diminished mental capacity getting put on Death Row for crimes they didn't commit while wealthy white people evade justice by agreeing to go to private counseling sessions even after murdering four people or savagely beating their wives under the influence.
Do you think for a minute that if Fuller was a black man from the inner city in Birmingham charged with the same exact crimes he would've been given the option of going into a lazy series of private counseling sessions? I think we all know the answer to that.
And then there are the victims who still stick by their men and blast the media on the rare occasion it does its job. When people like Janay Palmer and the wife of David Vitter (R-Huggies) insist on remaining victims and sniping at the press, such people do a disservice to other victims of domestic violence and marital infidelity. When the system insists on keeping guys like Vitter and Fuller in power and teenaged murderers out of prison for crimes for which nonwhites often pay dearly whether they commit them or not, they do a disservice and an injustice to these victims. Just because real victims refuse to justifiably embrace their victimhood doesn't and shouldn't absolve their victimizers from legal and social comeuppance.
But, in the words of the great Al Pacino:

EllBeeZee said...
Wow. I am blown away by how succinctly you have illuminated the disgusting hypocrisy of our modern "justice system. As a people, why are we allowing this???
9/10/14, 6:10 PM

CC said...
Because we'd rather read what the Kardashians are up to this very minute.
9/15/14, 12:34 PM
Post a Comment
<< Home
Contact
Home
Email:
brilliantatbreakfast at gmail dot com
RSS