Brilliant Recent Posts
Cavuto Completely Loses it on Michele Bachmann
Top 10 Suggestions That Should be Made by the Nort...
Tea Party Like It's 1899
Natural Born Cop Killers
Five Guys, Bergdahl and Freedom Fries
Good Times at Pottersville, 6/3/14
We need more parents like Richard Martinez
Nice Guys Finish Last, Then Go on Killing Sprees
And it's only going to get worse
Good Times at Pottersville, 5/23/14 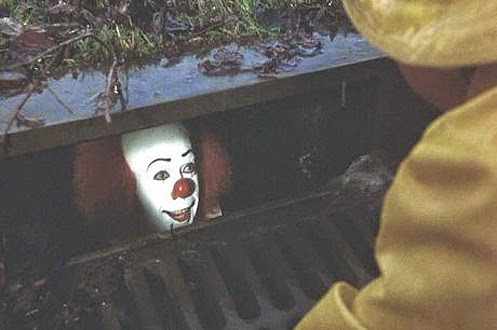 "Hey, kid, c'mere. Aren't you glad your mother didn't have you yanked with a coathanger?"
In the midst of this past week, with the fundraising drive to mitigate our financial circumstances, getting my three ebooks ready for the relaunch, the interview, editing Tatterdemalion, and attending to thousands of details that make up modern life, I neglected to write about the one big story that directly affected my adopted state of Massachusetts. Actually, there were two, the other being Gov Deval Patrick signing into law a bill raising the minimum wage to $11 ph by 2017, which would be the highest in the nation.
But this is about the Supreme Court's recent 9-0 decision to essentially evaporate the 35 foot buffer zone around family planning centers in Massachusetts that were created seven years ago, giving evangelical bozos unrestricted access to women seeking family planning services. What makes this ruling even more depressing is that the so-called liberals on the court, including the three women that make up a third of the High Court, sided with the reliably right wing nut jobs in this issue.
This is the same judicial body, don't forget, that 20 years ago had supported buffer zones around abortion clinics. In fact,

Buffer zones exist in numerous states — the newest, in New Hampshire, takes effect next month and specifies a 25-foot zone — and have often been controversial. Others also have made their way to the Supreme Court. In 1994, the justices upheld a buffer zone for abortion clinics in Florida. Three years later, they upheld a 15-foot buffer zone around the entrances of abortion facilities in New York state but struck a 15-foot floating zone.

This is the same court that was led by William Rehnquist, don't forget, and had on its bench Scalia, Clarence Thomas and Anthony Kennedy. But having all nine justices agree that the Massachusetts buffer zone that had somewhat protected women from right wing harassment violated the First Amendment (even if they were split as to how) is a huge disappointment.
It ought to be noted the SCOTUS benefits from a rigidly enforced 300 foot buffer zone protecting them from the distant din of protesters of both political stripes, which is perfectly in keeping of right wingers and One Percenters who have no problem not living under the same rules as the rest of us. 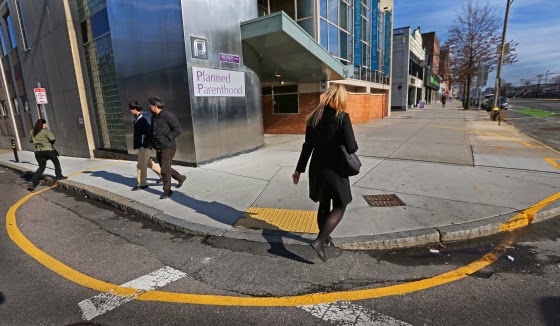 A yellow line is painted on the sidewalk and pavement surrounding Planned Parenthood Clinics at 1055 Commonwealth Ave., Boston, Jan. 15, 2014.
It appears as if all nine justices, especially the five right wingers, need a refresher course as to what free speech really means. Thirteen years before the buffer zones were erected, an anti abortion lunatic named John Salvi (who later committed suicide in prison) shot to death 22 year-old Shannon Lowney, who was merely the receptionist who'd opened the doors at a Brookline Planned Parenthood and didn't directly participate in any of the procedures. Salvi and his fellow lunatics had unanimously declared Lowney "Public Enemy #1" and the girl lost her life just for opening a door.
I guess free speech guaranteed by the First Amendment isn't good enough. You have to be able to lay your hands on these women, scream in their faces what murderers they are and to strip them of their last vestige of dignity, safety and privacy (which is what Roe vs Wade was all about) and to even threaten their lives in their insane quest for the sanctity of life. Of course, they pushed before the court a sweet-looking grandmotherly type who bemoaned the fact that she couldn't spread like milk and honey her message of love.
Because these Protestant Pennywhistles knew better than to be repped by another maniac like John Salvi, who was so mentally deranged by the time of his suicide he was convinced liberals were poisoning his food.
The Rude One had a pretty good idea a couple of days ago: Since the SCOTUS had essentially abolished buffer zones for women seeking family planning counseling and services, let's troll them at church, starting with their headquarters at their church in nearby Grafton. Let's block their entry into their church, mock them for their Sky Wizard, shove atheist literature in their faces. Because, fuck, tit for fucking tat, as the Rude One would say.
After all, you never see pro-choice folks blowing up churches and killing their docents and priests. Isn't free speech free for everyone and not just one narrow faction so twisted up in intolerance and hatred that they inevitably turn to murder and violence?
1 comments

Syrbal/Labrys said...
Obama has been reasonable. And he has been walked all over with hobnailed boots -- thus everyone he represented was likewise curb-stomped.

And because more progressive minded sorts are reasonable, we have not burned their churches or even bloodied their superior-god-loves-us-best-hypocritical-noses. We are reasonable, and thereby, when dealing with supremely unreasonable sorts, we cannot win by reasonable means.

The unreasonable ones keep screaming that it has come to a time of bloody revolution. I am very much afraid they might be correct because their own actions make it so. I really hope if that unfortunate belief is true? That they are suitably shocked to learn that when their push comes to shove there are MORE of us reasonable sorts shoving back.
7/2/14, 11:19 AM
Post a Comment
<< Home
Contact
Home
Email:
brilliantatbreakfast at gmail dot com
RSS