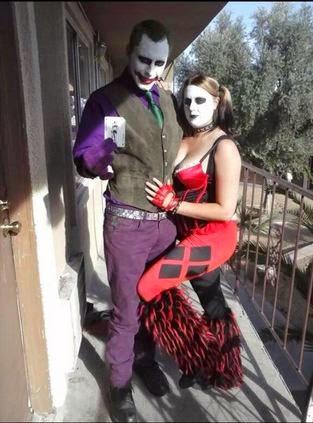 According to NBC Los Angeles correspondent Gadi Schwartz's Twitter account, this is the couple that had killed two Las Vegas police officers and an armed Wal-Mart shopper and their names are Jerad Miller and his wife Amanda.
Perhaps we shouldn't be looking too deeply into their cosplaying since they were erstwhile street performers who often went out dressed as the Joker and Harley Quinn.
What we should be looking more deeply into is their association with neonazism and white supremacy groups. According to the Washington Post, after ambushing two officers having lunch at a pizzeria, the Millers draped Gadsden flags over their bodies before marching to the local Wal-Mart and killing a customer with a gun before Amanda shot her husband before turning the gun on herself. Just before they opened fire on the officers, they shouted, "This is the beginning of the revolution!"
What's most notable to me is that just before their rampage, they'd bragged to neighbors that they'd spent time on the Bundy Ranch. You know, the same place in which snipers sighted down on federal officers with complete impunity. Apparently, according to their neighbors, when they came back from Bundy's ranch, they were more radicalized than ever.
There are several things to take away from this revelation.
One, we have to wonder when law enforcement will finally wake up and realize these right wing zealots are the real problem and not liberal Occupy protesters and college students.
Two, we have to realize this racist, antigovernment behavior and mindset is rapidly becoming the mainstream and that when these lunatics gather in large groups (as at the Bundy ranch), they have a tendency to radicalize each other. Insanity and hysteria, as history informs us time and again, is contagious. We are no further away from being susceptible to the herd mentality as our prehistoric ancestors.
Three, right wing media (and, yes, Roger Ailes, I'm looking in your direction) certainly need to start owning up to this baseless hysteria they keep whipping up by stoking fears that Obama will take away your guns and turning into folk heroes racists who are simply too selfish to pay their taxes and refuse to recognize the existence of the government.
When children grow up in a family, they instinctively seek cracks and weaknesses in what should be the united front of parents. When they see one parent's authority being undermined (especially when it's the father's), children will exploit that chink in the armor and begin by testing boundaries, questioning the values of one parent or another and, finally, engage in open rebellion.
Teabaggers, racists, gun nuts, tax cheats and other miscreants are, mentally, like children. As I told a fellow liberal a couple of days ago at our town's annual festival, you can fix ignorance. We do it every day through our public school system (a favorite perennial target of right wingers for budget cuts, privatization, charter schools and programs that merely teach to the test). What you can't fix is willful ignorance and when these peoples' fears are stoked and validated through a gigantic megaphone such as Fox "News" and CNN, then it gives these intellectually stunted people the illusion of consensus.
And when abortion doctor killers are glorified by Bill O'Reilly and homegrown terrorists sighting down on federal cops are glorified by Sean Hannity, it gives these maniacs the idea that if they don't like the rules put in place for the common good, then it's OK. Add to the propaganda campaign the Republican Party and the NRA that strenuously blocks any attempt at meaningful gun control legislation.
And law enforcement has got to realize that they are the enemy, the ones that are killing their own. Not peaceful Occupy protesters or students at a sit down protest or innocent black people or hippies growing medical marijuana or people calling for medical assistance and seeing their special needs loved ones shot to death or law-abiding citizens who committed the unpardonable sin of occupying the wrong house during a no-knock drug raid.
The Tea Party, the NRA, irresponsible right wing media and the clearly insane 5th Columnists they help elect to our infamously dysfunctional Congress are the enemies. And until law enforcement and the criminal justice system across this country come to that realization, they will be derelict in their responsibilities to the common good. There will be more people like the Millers to contend with and more officers and judges will be shot dead while they miscast their baleful glare at harmless, law-abiding folk.
3 comments

going after people like "occupy" is so much easier than the actual criminals such as this couple. Its easier to pick the low hanging fruit.
6/14/14, 8:33 PM

ChicagoMike said...
Late to the party here, but this is more than just insightful: I think it is an essential new direction in the kind of commentary/re-thinking that needs to be done in LeftBlogistan.

Even the cops (some are friends of mine) and 1 percenters - OK, some of them - are capable of getting it that the Kochs and the rest of the Main Chancer approach are selling the whole nation down the river. But it's hard to wrap your head around this, so... that's what writing is for. Nice! I know the blog is sorta hiatusing, but I will keep up with you guys for more of this approach. Cheers!
8/20/14, 10:12 AM
Post a Comment
<< Home
Contact
Home
Email:
brilliantatbreakfast at gmail dot com
RSS