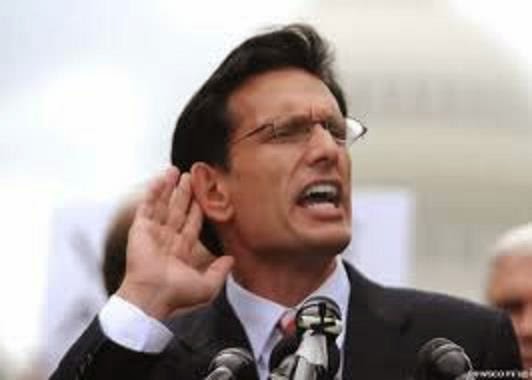 (By American Zen's Mike Flannigan, on, loan from Ari Goldstein.)
Right about now on Capitol Hill, if politicians are true to form, they're silently removing Eric Cantor's number from their Rolodexes and contact lists. Paul Ryan's curling bar bells in a gym somewhere trying to think of a way to plausibly deny he ever met Cantor and John Boehner has already gotten an early start on his day's drinking.
That's what politicians on both sides of the aisle do when one of their own is suddenly in the white hot sodium lights of a juicy scandal or abruptly lose an election or, in Eric Cantor's case, his party's primary. Congress critters are suddenly unavailable, you have to leave messages or get sent straight to voice mail and, politically, you're a leper.
House Majority Leader Eric Cantor lost his primary last night in Virginia's 7th district to a Teabagger named Dave Brat, a political virgin with a war chest of just $200,000 whom Cantor had outspent 12-1 and outraised 26-1 (Cantor spent more at steak houses than Brat did in his entire campaign). According to an internal poll, Cantor was supposed to beat Brat by 34 points but wound up losing by 11 (55.5-44.5%), meaning Cantor's peoples' projection was nearly 50% off (One wonders, considering the skewed math, if the pollsters were Karl Rove, Dick Morris and William Kristol). In losing the Republican primary, Cantor because the first House Majority Leader since 1899 to lose a primary (It ought to be remembered the position wasn't created until 1899, meaning Cantor's the first to fall in a primary).
Technically, it isn't over, yet. Cantor could run as an independent like Joe Lieberman when he lost the Democratic Senate primary to Ned Lamont in 2006 or legally change his name to Cesar Chavez or pose as a black man like one Republican had the chutzpah to do in a black voting district (and won). Of course, running under any other banner in Virginia's notoriously insane 7th district would fly about as well as him running on a New Black Panther ticket under the name Willie Horton.
So, for all intents and purposes, Eric Cantor has the unfortunate distinction of being the man who coined the term "lame duck House Majority Leader." And, as proof of what a political nonentity Dave Brat is, the news isn't so much that he won but that Eric Cantor, against all political reason, against all the math and against all historical precedent, lost. Corporate cash once again (As Mitt Romney, Newt Gingrich, Linda McMahon, Carly Fiorina and Meg Whitman had learned) lost big. And we're all left asking ourselves, "Who the hell is Dave Brat?" 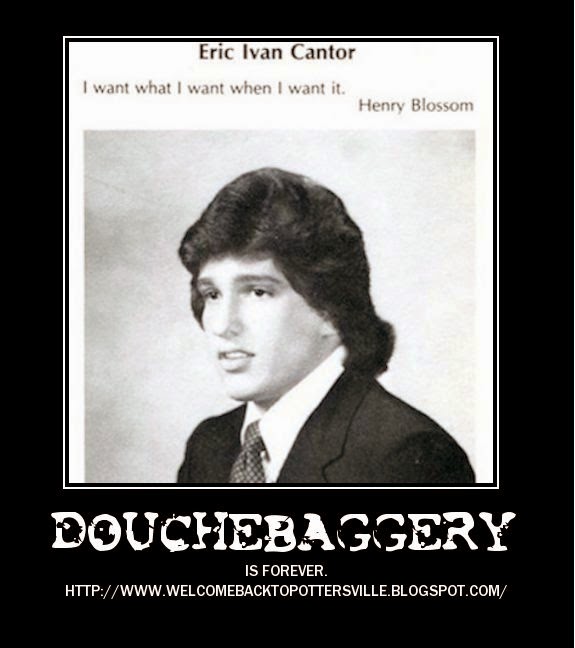 The former future House Speaker, who until last night was licking his chops and rubbing his hands at the thought of Speaker John Boehner retiring this year or being forced into rehab, suffered possibly the most stinging loss in American political history and without even a Macaca moment on Youtube. Eric Ivan Cantor thought he was doing all the right things good Republicans were supposed to do: He voted against embassy security funds, questioned Hillary Clinton when she said doing so would hurt US security, he voted to shut down the government, refused to deal in good faith with the President in 2011 and personally scuttled a debt ceiling compromise that would've avoided a downgrade to our credit rating.
In short, Cantor was like a hit man you see in independent B movies, someone who'd faithfully done his damnedest to destroy lives only to find his employers had put a hit on him because he'd just become a liability. Cantor's mistake, in retrospect, was to give some tepid support to the Grand Bargain Obama had struck with the House leadership regarding immigration only to turn his back on it and vote against anything with even the slightest whiff of amnesty. In other words, the man who had done more damage to America, including indirectly getting four Americans killed in Benghazi, than his predecessor Tom DeLay, was essentially voted out of office last night for being too liberal.
By the final leg of the primary cycle, both Cantor and Brat, an economics professor, were accusing each other of being liberal stooges and all that was needed was for both men to propose chaining an anchor to every one of our nation's 11,000,000 undocumented immigrants and to drop them down the Mariana Trench. But that long-established history of Republican buttfuckery wasn't good enough to the good patriots of Virginia's 7th district. Cantor's pretense of briefly supporting immigration amnesty made him so reviled among the teabaggers that, if Dave Brat hadn't run, they still would've elected a potato with a picture of Ronald Reagan thumb-tacked to it.
But Dave Brat had stepped into the breach, a David with a tricorner hat taking on Goliath in some Quixotic quest, tilting at wind farms and spouting free market principles that cannot possibly be beneficial in any way, shape and form in even the slightest degree to the largely working class people who make up any Tea Party chapter. Essentially, it was a case of, Anyone's better than you, the same mindset that let a professional chair-warmer like Robert Gates effortlessly slip into the Pentagon in the wake of Rumsfeld's resignation.
And Dave Brat, the very definition of a political nonentity, will be just another freshman teabagger in the House. Someone else will be elected House Majority Leader, perhaps even someone not as conspiratorial and harmful to the national interests as Cantor had been. The Tea Party had made mistakes before: Witness Allen West and Joe Walsh, who both got thrown out of office last year after snarling at anyone and everyone for two short years.
Dave Brat will likely suffer the same fate at the hands of infamously unforgiving and nonconciliatory Teabaggers whose memories, fears, paranoia and hatred for anything fair and democratic (such as their handing the primary to one of their own in a fair and democratic process) is longer than their actual knowledge of the issues and who really stands to lose when Teabaggers get elected to Congress.
2 comments

Anonymous said...
Mr. Brat is a dominionist. From wiki:
"Dominion Theology or Dominionism is the idea that Christians should work toward either a nation governed by Christians or one governed by a conservative Christian understanding of biblical law. At least under this name, it exists primarily among Protestants in the United States. It is a form of theocracy and is related to theonomy, though it does not necessarily advocate Mosaic law as the basis of government. Prominent adherents of Dominion Theology are otherwise theologically diverse, including the Calvinist Christian Reconstructionism and the charismatic/Pentecostal Kingdom Now theology and New Apostolic Reformation."

e.a.f. said...
oh doesn't that make me feel good. What about separation of church and state. sounds like the guy is a candidate for the Taliban, American style. Of course Cantor loosing, couldn't happen to a nicer guy. really enjoyed hearing the news. One down, a few more to go.
7/1/14, 5:04 AM
Post a Comment
<< Home
Contact
Home
Email:
brilliantatbreakfast at gmail dot com
RSS