Five Guys, Bergdahl and Freedom Fries
Posted by jurassicpork | 6:00 AM 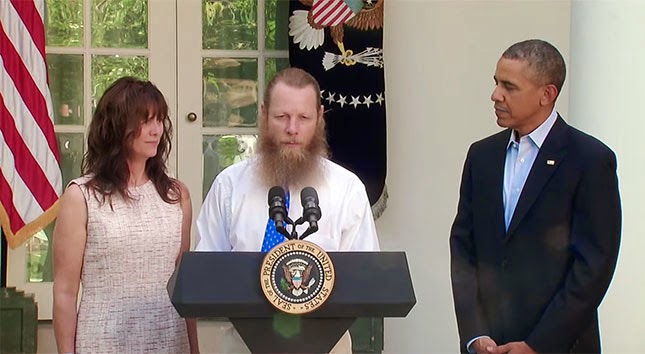 (By American Zen's Mike Flannigan, on loan from Ari Goldstein.)
"Your son's out now. If you really don't, no longer want to look like a member of the Taliban, you don't have to look like a member of the Taliban. Are you out of razors?" - Brian Kilmeade, Fox "News"
To those of us who don't relentlessly look at everything from a political prism, the POW trade of five Taliban prisoners for Sgt. Bowe Bergdahl was a geopolitical masterstroke. Regardless of his countless war crimes for which he is and will surely be found guilty, Barack Obama can always look at this and say this was an unqualified humanitarian success. As combat operations appear to be winding down in Afghanistan the five detainees were, according to international law, set to be released, anyway. And Sgt. Bergdahl, our government has known for years, was ailing. The only question remaining is, Why had the Obama administration been dragging its collective ass to secure Sgt. Bergdahl's release?
But the stars were aligned just right, with Jupiter in the 2nd House and all that and the Obama administration, partly to make the Democrats look good in the midterms, finally got around to doing the right thing. If the Bergdahl family was merely an incidental beneficiary of this midterm maneuvering, who cares, right? One would have to be the worst kind of idiot not to see the political opportunism and fortuitous timing behind this. In Washington DC, even the weather is never prone to coincidence.
Yet it seems the worst kind of idiots are the ankle biters on Fox, Pajamas Media, Breitbart and other right wing methane convection ovens who have turned on the Bergdahl family in a way that recalls the far right extremists in the Bergdahls' native Idaho. Hair product storage facility Brian Kilmeade not so subtly suggested that Robert Bergdahl's beard qualified him as a terrorist sympathizer. This is all so much manufactured, canned outrage. Sources of the late Michael Hastings warned that the GOP would turn this into a Willie Horton political football should Bergdahl be released during an election year and it and their flying monkey squadron are making good on their threat.
It's hard for anyone in the reality-based community to follow this frayed skein of logic coming from the seedy side of the tracks. The official GOP line is, "We don't deal with terrorists", which is exactly what the GOP has been doing since the days when Bush was still accidentally walking into the broom closet of the Texas Governor's Mansion (anyone remember UNOCAL and Enron's part in a certain gas pipeline?).
The conservative pundits' official line is... Well, it's hard to wade through all the conspiracy theories but apparently our first black President made it well nigh impossible for the right wing to give Bush the credit for releasing Bergdahl or, for those ultra hard liners, St. Ronnie of the Jelly Bean.  Ergo, if they can't grab the credit for facilitating the release of the last American POW in Afghanistan, might as well shit on the accomplishment itself. Sour grapes, in other words.


Damned if he did, damned if he didn't.
Since January 20, 2009, the Republican Party had immediately gone from "loyal but principled opposition" to immature contrariness, damning the president for stealing their thunder and always prepared to damn him if he didn't. One can perfectly imagine the GOP turning this into political hay if Obama hadn't secured Bergdahl's release and we would've been treated to an endless news cycle loop of chyrons from Fox demanding, "Why did Obama leave Bergdahl to die in Afghanistan?" and "Obama abandons last American POW in Afghanistan," while the right wing and its punditry would've rallied to the Bergdahl's family's side in artificial condolence.
And the racist Republican Party was determined to make hay out of this one way or the other just as surely as they cynically used Pat Tillman for their own ends even though Tillman himself had demanded they not. And that's because the Mitch McConnell/Jeff Sessions/KKK wing still running (for now) the establishment GOP cannot tolerate the thought of a black man doing a better job of governance, as well as the occasional humanitarian action, than them.
The facts don't matter to these foam machines any more than they would to a lunatic asylum patient painting pictures of Reagan with their fecal matter. The facts are as follows:
Not all the Muslim detainees belonged to the Taliban.
According to international law, as our combat role in Afghanistan winds down, our interest in their freedom fighters officially should also wind down.
All five men will be confined in Qatar for at least a year and their actions strictly monitored.
Less than 90 Taliban militants have been released during Obama's presidency, as opposed to over 350 during Bush's two terms.
Once more, with feeling: Sgt. Bergdahl's life was in imminent danger.
And the only thing we can safely take away from the right wing's reaction to the POW exchange is not what they mean to say but what they are in actuality saying:
"We don't give a flying fuck about the troops and will gladly abandon them if the Black Guy so much as even mentions helping them out. If we can't take credit for it, we'll be damned if we'll let the Uppity One get it. And we will vilify anyone and everyone who benefits from it."
In light of this latest faux scandal, the blocking of VA and embassy security funding bills, the Walter Reed mess and the other VA scandal that actually started with Republican intransigence, any pretense the GOP makes to loving and supporting the troops should earn no more than bitter laughter and spittle in their direction.
Because the Republican Party has proven time and again they don't give a damn about the military or their families, will send them off to reckless, needless wars without adequate armor, will short change them on their medical care when they return, cynically use them to partisan advantage even to the point of lying to their families and will use them as political footballs when they decide the time is right. And, in case you doubt me, Henry Kissinger pretty much said it all for the Republican Party 41 years ago.
Despite these palpable and inconvenient truths, the military has been since time immemorial a conservative voting faction. Let's hope that changes by Election Day this year and let them remember at the polls the position the Republican Party had decided to take with Bowe Bergdahl and his family.
0 comments