We need more parents like Richard Martinez
Posted by Jill | 9:23 PM
As expected, the weekend mass murder in California has brought out the usual suspects on the pencil-penis right. I'm not even going to go into the kinds of things that are being said by the sociopathic Elliot Rodger wannabes out there in the "pickup subculture" who think that their very existence entitles them to sex provided by beautiful women that they can then spit on later for being sluts, evil, or whatever bile they choose to spill to cover up their deep self-loathing.

I'm here this evening to look at the so-called "mainstream" of wingnut thought on this question; the NRA acolytes who seem to honestly believe that without their guns they have no penises. First we have the New York Post, Rupert Murdoch's useless Big Apple rag, which yesterday showed everything that's wrong with the subculture that fueled the shooter's rage: 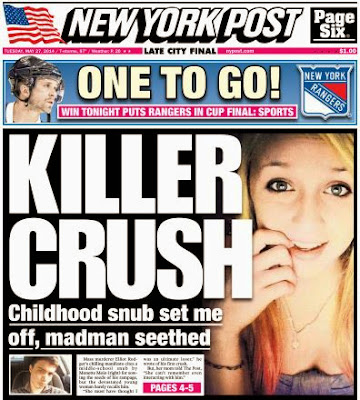 It's all here -- a photo of a pretty blond girl -- exactly the kind of girl that Rodger hated for rejecting him -- her finger half in her mouth, a hint of cleavage showing, a look that could be interpreted by sad sack losers as "come hither" -- and the subheadline "Childhood snub set me off, madman seethed." I'm sorry, Rupert, but you can call him a madman all you want; this cover shows what you REALLY think, and it's vile...disgusting. How do you sleep at night?

Meanwhile. the male Sarah Palin, Samuel "Joe the Plumber" Wurtzelbacher, seeking another moment in the sun, penned an "open letter to the parents of" those killed. An excerpt:

I am sorry you lost your child. I myself have a son and daughter and the one thing I never want to go through, is what you are going through now.> But:

As harsh as this sounds – your dead kids don’t trump my Constitutional rights.

Richard Martinez, whose son (Christopher) was among the murdered, choked back tears at a news conference, blaming politicians the next day: “The talk about gun rights. What about Chris’ right to live?” Martinez said – and much more.

There are no critical words for a grieving father. He can say whatever he wants and blame whoever he’d like – it’s okay by me. You can’t take a step in his shoes – at least I can’t.

But the words and images of Mr. Martinez blaming “the proliferation of guns”, lobbyists, politicians, etc.; will be exploited by gun-grab extremists as are all tragedies involving gun violence and the mentally ill by the anti-Second Amendment Left.

Is Wurtzelbacher saying that everyone who has opined in the aftermath of this that "The bitches had it coming" is mentally ill? Or just those who BECAUSE THEY HAVE ACCESS TO GUNS go out and kill women?

While looking for the video above, I came across a number of Alex Jones-style tinfoil hat videos insisting that Richard Martinez is a tool of the anti-gun left, that the shooting was an Obama false flag operation designed to take away the guns of good patriotic 'muricans who just want to know that they could take out the black man in the White House iff'n they had a mind to. No surprise there either, but it makes me wonder -- what WILL it take to change enough minds so that we demand action; that we INSIST on it? We had twenty dead six-to-eight-year-olds dead because of guns and still we did not cry out.

So I'm going to say something that will no doubt piss a lot of people off:

We need to see more grief.

Yes, there are those who will continue to insist that Newtown and Santa Barbara were false flag operations. Those people are beyond hope. But what about the people who sort of marginally care but hey, Dancing with the Stars is on tonight and we need dog food and the car needs an oil change? How do we get them to realize what a bunch of men with penis size anxiety are doing to our country?

We need to see more grief.

Yes, it makes us uncomfortable. That is why people have needed to try to paint Michael Martinez as something other than a grieving parent. After all, we don't see much raw, live grief. We saw the Newtown parents clutching photos of their dead children, telling Barbara Walters or Ann Curry or some other faux-carer of the media what their child was like. We saw their jaws quiver and their eyes fill with tears -- all very tasteful, all very sanitary, all very seemly.

Grief is supposed to be something linear. You're supposed to cry for a week, or two, or even a couple of months -- and then buck up and move on; "get over it", because there's work to do and people to not make uncomfortable. The problem is, that's not how it works. For every time you see someone collapse in screams upon hearing the terrible news that their child or spouse or sibling has died, there are dozens, perhaps hundreds, of people who leave the accident scene, or the hospital, or the nursing home, in a state of shock and numbness. We look fine on the outside for a while, just like those poised Newtown parents. But after a while the numbness wears off and the waves start. And they can last a very long time. But since we have not adhered to some external timetable, we do our grieving behind closed doors, alone. I guarantee you, the Newtown parents do it. The families of the women George Sodini killed in 2009 do it. Trayvon Martin's parents do it. The families of the others killed by Elliot Rodger will do it too. Because that is just how it works. After all, we mustn't make other people uncomfortable. It would be unseemly.

Well I say bullshit to that. Death is part of life. Loss of loved ones happens. It is horrible and it sucks royally, but it happens. People get sick. They die. People also get murdered by punk kids with a false sense of entitlement who think beautiful women owe them sex because of some delusion of grandeur they have. Those of us who arguably had time to prepare, to try to wrap our minds around something that is unfathomable until it actually happens, well, we will continue to have to grieve behind closed doors because we make people uncomfortable. But a parent whose son got killed while at work, or whose daughter was in a sorority house, or whose son was coming back to his father's house with a bag of Skittles and an iced tea; a husband whose pregnant wife was gunned down while she was teaching aerobics at a gym -- we owe it to them and to the memory of their horrific losses to witness their grief; to hear the screams of the nightmare that will never end; to witness their legs give out from under them.

Photographs of pristine, healthy, adorable children didn't do it. Lovely, dignified, stoic parents trying to be brave for the cameras didn't do it. Perhaps seeing what pure, raw grief looks like MIGHT get through. And we have to allow them to show us no matter how long it takes for the numbness to wear off. Because no, Samuel Wurtzelbacher DOESN'T know what Richard Martinez is going through, because he gets to tuck his kids in at night. Wurtzelbacher lacks the empathy to even TRY to imagine. So perhaps people need to start showing him.

The WP said...
Personally, I think we should all exercise our personal, constitutional right to own firearms and then camp out over at Plumb's house. Then we can shoot out some windows, and when he comes out waving a gun, take the fucker right out. Stand our ground. Then do the same thing to anyone else that comes at us lefty peaceniks with a piece.

If we can't get our KongressKlowns to enact sane legislation, let's take it out to the nth.

The people who advocate for "gun rights" because its a "constitutional" right seem to forget the other right, to life, liberty, and the pursuit of happiness". You can't be happy or free if you are chained to grief for at least 10 yrs. That is about how long its for grief to become "less".

Unfortunately the gun makers have the politicians in their pockets and it isn't going to change. You could have mass gun killings on a weekly basis in schools and the gun nuts would only call for more guns. Not until you have people who will run for office on a gun reduction/regulation platform and win, will there be any changes.

In Canada and Japan we have fewer guns and hence fewer gun murders.


The U.S.A. needs gun regulation. Australia implemented it and they haven't had mass gun killings since they did. Youth suicide also went down.

Unknown said...
Very well said. The overpowering grief this causes must be kept in the light, at the front of life's theater.

We've seen, time and time again, how this fades to debate; a process in which we are quite literally supposed to be free of emotion and full of pragmatism.

However, pragmatism seems all to inadequate to bring an end to this nonsense. Pragmatism is sanitizing the true impact of actions by those who couldn't care less about pragmatism or, for that matter emotional rhetoric.

But those left to deal with the pain of loved ones and the shame of inaction must be exposed to as much raw emotion as possible if we're to secure the right to life over the right to firearms.
6/3/14, 3:20 AM
Post a Comment
<< Home
Contact
Home
Email:
brilliantatbreakfast at gmail dot com
RSS