Brilliant Recent Posts
Fox "News'" Greatest Fuckups of All Time
I can't wait
At Last. An Honest Cable/ISP Corporation.
Caturday: Bear Threatdown Edition
Jesus Didn't Have Such a Good Friday...
They aren't criminals until they actually shoot so...
Why is this even an issue?
Find Your Zen – the Art of Sublime Writing With Au...
Would someone please ask Bill O'Reilly about the c...
Does Phil Donahue get his job back now?


The poster boy for "Clean-Slate Christianity"
Posted by Jill | 6:19 AM 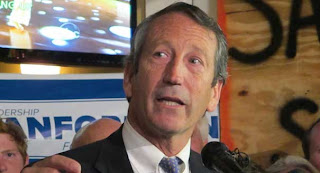 It wasn't all that long ago that former South Carolina governor Mark Sanford was being touted as a potential GOP presidential candidate. Then he went AWOL from his job to go Hiking the Appalachian TrailTM (and was there ever a greater euphemism for fucking your extramarital paramour than this?), and we weren't going to have Mark Sanford to kick around anymore.

Or so we thought.

But this year, in that miraculous place that Christianity occupies in the heads of the terminally unrepentant, Mark Sanford decided that since God had forgiven him (he knows this for a fact, of course, because like all these Christofascist Zombies who want to tell everyone else how to live but can't control their own impulses, he has a direct conduit to the Great White Alpha Male in the Sky), it was time to enter politics. And so he is now the Republican nominee for a Congressional seat, and his opponent is Stephen Colbert's sister, Elizabeth Colbert Busch. This would be a match made in political snark heaven, were it not for the inevitable participation of not just a moronic electorate, but also the political media, in the comeback tour of their prodigal son.

Everyone loves a redemption story. Even those who make grievous mistakes can repent and redeem themselves. We are human, we make mistakes, and we learn from them. But Mark Sanford appears to have neither repented nor learned anything, other than how to cynically drape himself in religion in an attempt, which may very well be successful, to climb to power again.

When Mark Sanford was revealed to not be hiking the Appalachan Trail, but instad hiking the trail of one Maria Belen Chapur, the inevitable comparisons to Bill Clinton began. The difference between Bill Clinton and Mark Sanford was always one of hypocrisy. Clinton's stock in trade had NEVER been moral, particularly sexual, restraint on the part of others. Whatever the dynamic is in the Clinton marriage, there's clearly a strong basis of some sort there. My speculation has always been that Hillary is a smart woman who knows perfectly what she's got in this man, and knows that the need he has for adulation and attention is part of it. She knows that there is only so much she can pour into that black hole, and that occasionally someone else will want to pick up the slack. It was for HER to decide whether to stay or go after his foibles while in the White House, and she stayed. Jenny Sanford, on the other hand, decided to leave. That was her right too. Bill Clinton managed to lead a country while chaos was swirling all around him. Mark Sanford fled to Argentina without telling anyone, not even his staff.

Does the private behavior of a politician matter? Only to the extent that it interferes with said politician's ability to do his job, and only to the extent that it reflects what said politician would enact in terms of legislation affecting the lives of others. Sanford, who has shown his own contempt for the sanctity of marriage, still will not endorse the rights of gay Americans who want to take vows that they will take a hell of a lot more seriously than Sanford does to do so. Sanford has said that he has "evolved" from his hardline position in his vote to impeach Bill Clinton when he was in Congress, but that's yet another example of Republican empathy -- that one only has empathy when one's own self or family is affected. (See also: Rob Portman.) Sorry, but such evolution doesn't count. It only counts when it is about people you don't know, not just those you do.

Mark Sanford has always painted his affair with Chapur as being about True LoveTM. "The heart wants what it wants", as Woody Allen said about his then-affair with his partner's adopted daughter, though I'm not sure that taking Woody Allen as a role model is where Sanford really wants to go. But even if this is, one has to wonder if the alarms ever went off in Sanford's head when his "dear dear friend" started to seem a lot more important than his wife was. Did the "Danger Will Robinson!!!" detector that people NOT protected by Clean Slate Christianity have go off at all? When he reached that fork in the road where one path led to the Appalachian Trail and Argentina and the other led to "There's clearly a problem in my marriage and I have to either a) see what can be done to repair it or b) man up and leave and take the personal and political hit", did he hesitate for even a moment, or were the endorphins being dumped into his bloodstream by his brain just too strong to overcome?

In his campaign ads, Sanford alluded to "past mistakes." What was the mistake, Mr. Sanford? Was it not living up to the behavior you expect of others? Was it cheating on your wife? Was your affair you "mistake"? If it was, then why are you now marrying that "mistake"? Mark Sanford needs to make up his mind. Either he's the tragic hero of his imagination, an American Edward VIII, who renounced a promising political future "for the woman I love", or else he's a man ruled by his impulses of any given moment who can't man up and accept the consequences of his action, but instead decides he knows what his God thinks, and that his God is so enamored of him and the gifts he brings to this country's political process that he gave him the thumbs up to proceeding down the Appalachain Trail.

Even the Duke of Windsor had the decency to know he couldn't ride triumphantly back and become king again.
2 comments

Anonymous said...
People will vote for him because they would never vote for a Democrat.

But honestly, he should never be given a position of authority again in the public sector.

While Governor, he left his state. I do care that he left his wife and children, but the bigger picture for politics is that he LEFT HIS STATE AND NO ONE KNEW WHERE HE WAS.
Why should he get a second chance? He was derelict in his duties to the people in his state. He broke a sacred trust to his people.

And of course there is the hypocrisy of being a so called christian, cheating on your wife and 'knowing' God forgave him.
Republicans make me sick.
4/4/13, 9:35 AM

The WP said...
Why do guys like this think that having an erect penis exempts them from having a brain....not to mention a social conscience?

Not every guy is like this, and you're right about Bill Clinton - he had the sex ethic of an alley cat and I am postive Hills knew that going in. But this one is beyond fathom.

If a woman behaved this way, she would certainly NOT be "permitted" to hold, much less run, for public office. Yet that creme de la creme of female intelligence, Madame Bachmann,keeps getting re-elected. There is something so perverse about that.

Frankly, I don't get any of it. The more I read the less I understand. Think I'll go crawl back under my rock now.
4/4/13, 1:25 PM
Post a Comment
<< Home
Contact
Home
Email:
brilliantatbreakfast at gmail dot com
RSS