Brilliant Recent Posts
Jesus Didn't Have Such a Good Friday...
They aren't criminals until they actually shoot so...
Why is this even an issue?
Find Your Zen – the Art of Sublime Writing With Au...
Would someone please ask Bill O'Reilly about the c...
Does Phil Donahue get his job back now?
Yup, still here
Ten Years Later...
Open Thread: Irony Deficient edition
Happy St. Patrick's Day: When Hobbits Attack edition


Caturday: Bear Threatdown Edition
Posted by Jill | 5:59 AM
My now-departed mother was a collector. When I was a child, she collected interesting owl figurines, most of them disappearing along the way with only a few odd reminders of that particular obsession remaining when we started going through the mess in her house last December. For a while she collected cut glass bowls. Then Lladro figurines, but only of dogs. She would have collected dogs if she'd had the will to get up off the chair and actually do something, or if she hadn't had her odd obsession with Rottweilers. After all, there are only so many Rottweilers you can fit in a 1500 square foot house.

Her greatest and longest-lasting obsession, though, was with teddybears. The odd thing was that like everything else she bought, she largely lost interest in them once she bought them. She always claimed to love her bears, but most of the good ones were kept in barrister bookcases in the spare bedroom that she almost never entered and to which she always kept the door closed because it was such a mess; or up in the loft in her house, where she never went because she couldn't handle the steps. While going through her house in December, I found a huge Steiff bear of which she'd been very proud for which I know she paid an arm and a leg because she named him "Costly", tossed in a moving carton. Who knows if it had ever been unpacked since her move from Maine in 2001.

Mom had always said she wanted me to keep the bears, or to keep some of them, sell the rest and donate the proceeds to an animal shelter. I thought the first idea was horrifying, because I knew she had a lot of them, and I never thought I'd want to keep any of them. My sister has sent me two cartons of them, and I had some fun with a few of them by freaking out Maggie as she sat on the sofa and then LOL-ifying the result: 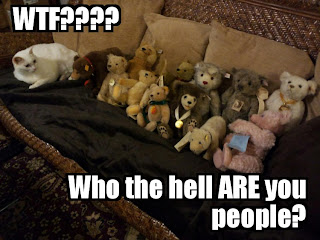 Yesterday I took a bunch more and put them out on the deck, some of them in the little chairs and baby carriages that Mom also bought for her little "babies" that don't demand anything of their mother (like care and nurturing) but stay nicely quiet and immobile forever, and put them out on the deck to air out, since none of these have seen fresh air since being conscripted into her mad obsession. 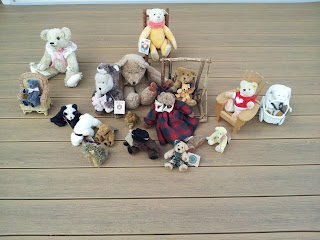 For some strange reason, they seemed happy, reminding me of a bunch of old Jewish ladies sitting in the park on the first nice day of spring.

Syrbal/Labrys said...
I always wonder if I will get odd obsessions as I age...I look at my piggy bank collection, for instance, with worry...although I only have 8 or 9. I have rather more teacups, however!

jurassicpork said...
Maybe you could tie-dye them and sell them to Grateful Dead fans. They'll buy anything.
3/30/13, 11:27 AM
Post a Comment
<< Home
Contact
Home
Email:
brilliantatbreakfast at gmail dot com
RSS