Brilliant Recent Posts
Perception is Everything
It's Official
I had my name because my mother changed hers. So ...
My Catholic friends
Somewhere in America, a Brooks Brothers is Missing...
Because she said so, that's why
Really, people, did Seth MacFarlane ever stand a c...
Useful Idiots
The Stupidest Staff in Congress
The sociological perspective on navigating in and ... 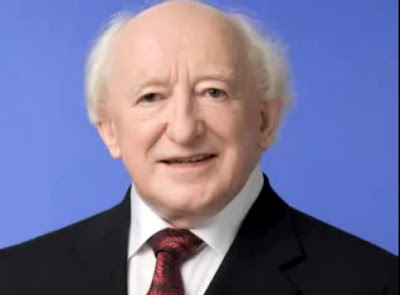 Here's a blast from the past.
Back in May 2010, then Deputy and future President of Ireland Michael D. Higgins appeared on a radio show with right wing expat Michael Graham, a Tea Party-loving lunatic who claims to have all the facts on his side while revealing his ignorance of basic facts when confronted.
Higgins began by speaking about what he'd seen in Gaza and the plight of the Palestinians, rightly calling out the Israelis for what amounts to a slow motion genocide. This, naturally, resulted in a hysterical, loud and sour rant from Graham who hoarsely began screaming about Israel's right to exist and, Oh my God, one guy in Israel got his leg blown off by a missile fired from Gaza while paying no mind (which is inevitable since he is essentially brainless) to the much greater carnage suffered by the Palestinians, whose homeland is shrinking so dramatically, they've resorted to burying their dead in mass graves because they're literally running out of space.
This rant quickly got Higgins' Irish up, who began by decimating Graham's beloved Tea Party and the Queen teabagger herself, Sarah Palin. he tore into Graham for supporting a movement that appeals to the reptilian part of the brains of reactionaries like him and stoking fear and hatred.
Higgins was, fittingly enough, introduced by the radio host with a quote from Lord of the Rings. This feisty little Hobbit, in these 21 minutes, proves that he has more backbone and well-placed sense of righteousness and justice than virtually any politician in America. He effortlessly eviscerated Graham and revealed him as the flaccid dick he truly is, as well as Wall Street, Sarah Palin and the murderous, terrorist state of Israel.
Ergo, being a political wonk, this is how I choose to celebrate St. Patty's Day, with this wonderful blast from the past that ought to be played whenever possible, especially every March 17th. This is what my people stand for and this why I'm damned proud to be Irish.
Erin go braless.
1 comments

coyotebanjo said...
Michael Higgins is a great man and this was an epic and eminently Irish takedown. I tell students in my annual folklore/music field trip "don't get into a political argument in an Irish pub unless you're both well-informed and extremely articulate. They'll smoke you."