Brilliant Recent Posts
Obama's sting operation
Blogrolling In Our Time: Amish is the New Black e...
American Zen on CreateSpace
We Create Our Own Reality
Thanksgiving 2008
Today we give thanks for the ability to laugh at s...
Sweet Jesus I Love Martin Bashir
Sad Mitt Romney
Does this ad make New Jersey look stupid?
The stupidest fucking article ever written by some... 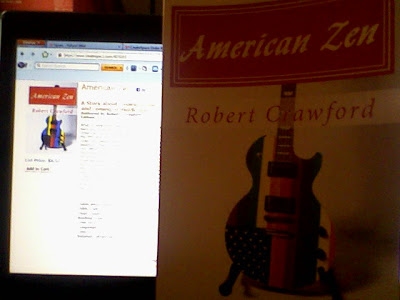 A couple of days ago, American Zen arrived in the mail. It's a novel on which I'd been working intermittently since March 18, 2008, although the drafting phase only took 120 days flat (if only they could all be that easy).
The CreateSpace folks gave me exactly what I'd sent, proofed and approved and any faults I completely own. It's a high-quality production with a nice, glossy cover (albeit at a coffee table-sized 8x10). What I can't understand is, why didn't I feel the sense of elation that I predicted I'd feel on seeing one of my novels professionally printed and bound for the very first time?
Perhaps it's the fact that CreateSpace, however noble its intention, is essentially a glorified vanity press, minus the outrageous printing costs. I know there was no editorial gatekeeping and no hurdles to overcome aside from the headache of formatting, uploading, proofing, etc. Any idiot with a pile of words and internet access can publish and all too many of us prove that every day.
It wasn't as if I was blase or nonplussed by the book's arrival. I knew it was mine, I was seeing it ritualized in print and I still feel that American Zen is my most brilliant sustained literary effort to date. I know it belongs between covers. It was more like a sense of numbness at seeing my book in print, one of only two copies thus far extant on the planet earth.
The closest I can come to describing the experience is to refer you all to that scene in Steven Spielberg's AI in which the husband brings home the robot boy David for the first time and his wife reacts coldly to it. He looked like a boy, spoke like a boy and acted like a boy but the wife knew he wasn't the real thing. That's what it was like for me. It looked like a book, felt like a book and read like a book. But I knew it wasn't the real McCoy simply because it neither validated my existence as a writer nor honestly realized my ambitions, because no real editor was involved, no P&L done on it, no real publicity and advertising behind it, no agent that had sold it. Through no fault of its own, it's a fraud. It's like that guy you see scuttling from the bushes in the last 100 yards of a marathon. He crosses the finish line like everyone else but it doesn't count and everyone knows it.
Maybe in time I'll come to accept it and, hopefully, those who order it will feel a greater sense of excitement than had I. But I regret that I can't share the elation of others who receive their CS books in the mail for the first time. I doubt that when I get my second book, The Toy Cop, the reception will be much warmer. 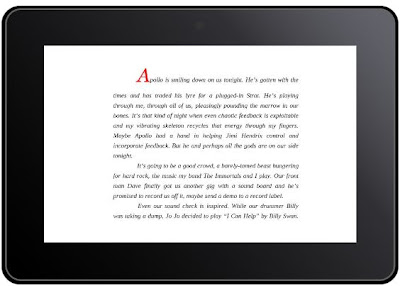 Here's a mini preview of how it would look on your Kindle in landscape. All told, the book stands at a trim 358 pages (although there are 46 lines on each page, as opposed to the standard 32. There's only so much you can compress a 150,000 word manuscript.), which comes out to just under 2.5¢ per page, which is pretty comparable to "real" paperbacks that generally have lower word counts. Right now, I'm in the process of writing a "sell sheet" and learning how to register my novels with mega distributor Ingram's so I can get it on their catalog.
Now, I've begun taking some hits ever since I took a sabbatical from political commentary. My own hit count here has gone down, I'm losing followers on Twitter by the droves and if I gave a shit about that, I'd be wringing my hands. It's not as if most people give a damn what I have to say about anything, anyway.
But American Zen was different, a completely atypical novel for me, and this represents the best of me and, I'd like to think, the best in all of us as a species. There are no car chases, no exploding buildings, no serial killers or body counts, no dark, twisted conspiracies. It's a fairly simple and straightfoward story of a typical, middle aged guy who's comfortable and then begins to wonder, as do many of us at that age, "Is this all there is? Should I have gone in another direction way back when?"
I know of only one other author who can share my near out-of-body-experience and that's Richard Bach, author of Jonathan Livingston Seagull (who, ironically, crashed his plane and was nearly killed this past fall). Bach said right after the book's publication in 1970 that it was unlike anything he'd ever written. In fact, the genesis for his novella was even stranger than mine. He reported hearing a loud voice in his head that shouted, "Jonathan Livingston Seagull!" and the book then took shape.
Well, I didn't hear any disembodied voices in my head, thank goodness, although I can imagine the voices of each of my characters as vividly as their physical characteristics. By Day One or Two, I had all the dramatic spikes lined up and it was merely a matter of writing the transitional chapters that would come later.
American Zen not only is by far the most atypical novel I've ever written, it was also the easiest to write, revise and the only one written more or less in chronological order. Despite the fact it was extremely difficult to hold off from writing the later chapters that I had percolating in my head for up to four months, the self discipline I used shows, making for an unforgettable yet believable story. Believe me, I wouldn't be pimping this book for years unless I thoroughly believed in it.
I never wrote nor will ever write a political blog post I'd ever want to put between covers and the topical 1660-odd articles I've put up at Pottersville and here over the last four and a half years will be forgotten in time. But I'd like to think this will stand and that it and other books I've written and am writing now will be my way of saying not only, "I was here" but "We were here and this is what it was like to be human."
2 comments

The New York Crank said...
Take heart. I know a well-known genre author, with over 100 published books to his credit, who is now going largely in the self-publishing direction.

He points out the difference in royalties, 10 or 15% if you go with S&S or Random House or one of those, vs. 70% with, say, Amazon. And what do those publishers give you for taking 85 or 90% of what your book earns, besides a warm feeling?

Publicity? They'll help a little, but you gotta largely do it yourself. Advertising? Fuhgedaboudid. Bookstore distribution? Well yes, in the five (or is it three?) bookstores left on the planet.

"These days," says my author friend, "going with one of the publishing houses is the new definition of vanity publishing."

jurassicpork said...
" 'These days,' says my author friend, 'going with one of the publishing houses is the new definition of vanity publishing.' "