Brilliant Recent Posts
The Picture Mitt Romney & the GOP Doesn't Want You...
The Cheshire Cat's Sodomization of Goober and Othe...
Here's something I missed
Just checking in....
Malala Yousufzai
Planet Moron
Any Way the Wind Blows
I was so angry today
Sound Minus the Fury
People Want To Sing Along


“Why is Bain Capital refusing to tell the truth to the American people, acknowledging that Sensata Technologies pays their young women workers in China just 99 cents to $1.35 an hour to work 12-hour shifts, seven days a week? Does Bain Capital care that the young women working in Sensata factories in China have no freedom of religion, no freedom of speech, no political freedoms and no right to the International Labor Organization’s internationally recognized labor rights standards? The American people deserve an answer.”
- Charles Kernaghan  Director, Institute for Global Labor and Human Rights

47%, 53%, 99%, 1%, 170. Reading the news these days is like reading an old fashioned ticker that rich fucks used to have in their offices in the 20's and 30's. But the number 170 is what I'd like to address today. I'll shelve my trademark snarky cynicism and not rhetorically ask whether 170 Sensata jobs being outsourced to China so the Bain-owned company can have the same work done for .99¢ an hour would be so important to liberals if Mitt Romney, Bain's "former" CEO, wasn't the Republican presidential nominee. Instead, I'll just assume it would be just as deserving of the ink and pixels it's been getting even if Romney didn't get the nod in Tampa.

Indeed, Sensata Technologies, formerly of Freeport, Illinois, has become the poster child for Bain Capital, Mitt Romney's entire campaign and vulture capitalism in general. It's become a moral touchstone for bottomless, heartless and soulless corporate avarice. Rub Mitt Romney's tax returns against it and you'll see a smudge of slime.

The jobs will be permanently gone, ironically, by November 5th, the day before Election Day. After taking down the American flag for a week, many of the workers at Sensata were forced to train the Chinese workers who will replace them so Sensata, Bain Capital and Mitt Romney can enjoy even fatter paydays. If the Freeport workers had refused, the Bain-owned company would've denied them the means for government assistance.

Romney's dealings past, present and future with Bain and its dealings with corporate Chinese entities is a seemingly bottomless financial rabbit hole that includes Romney owning $2,250,000 in a trio of Bain funds involving at least eight Chinese companies, some of which had been sued for copyright and patent infringement. In the meantime, Romney cynically strikes a populist pose on a campaign trial by shadowboxing with China and how they're stealing American jobs. In practice, however, Romney and his scumbag heirs at Bain Capital are helping to load the truck in the back alley.

Not only that, Romney gets to feign blissful ignorance about this because all these investments are in "blind trusts" that are now public knowledge. If Joe Blow now knows the outline of Romney's Chinese investments, then how can Romney, a man whose weekly $450,000 income automatically puts him in the top 2%, plausibly claim ignorance?

The question of why Mitt won't go to Freeport and/or intercede on their behalf by making a single call to Bain to put the skids to a transition in which they've already invested millions is increasingly academic. As the election is now three weeks away, reasonably asking Romney to do such a thing, which would be a cynically-motivated PR triumph but a PR triumph nonetheless, would be like the chickens asking the fox for help rebuilding their coop. And perhaps it's best if Romney keeps his distance. It would be perfectly in keeping with a guy who temporarily suspends claiming tax deductions only to retroactively reclaim them and get the balance of the return to temporarily stop the Sensata outsourcing only until after the election. As Mason Verger said in Hannibal, "When the fox hears the rabbit scream he comes a-runnin'... but not to help."

But not acknowledging the Bainport crisis, in which 170 people, scores of families and many local business will be adversely impacted just a few weeks before the holiday shopping season, is turning into a bigger balloon that the Romney campaign can no longer afford to ignore. This increasingly no-win situation is threatening to turn international as a delegation of French Samsonite workers who were also victims of Bain Capital have visited Bainport to lend their support. 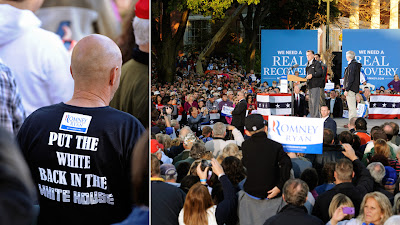 Romney could strike another populist pose and cash in those Chinese Bain funds while not stopping s single job from getting sent to Baoying and continuing to spar with China over job outsourcing. That would strike a chord with the undecided 47% goobers who are still leaning toward Romney in their desperate attempt to make the White House white again.

Here's another crazy idea: Since Romney loves talking about Solyndra so much, how about if Barack Obama actually mentioned Sensata during tomorrow's debate instead of pretending as if these people don't exist? That would strike a populist tone with the undecided 47% goobers who are even more scared shitless of a Romney presidency than they are of a black man running the country. But from voting for TeleCom immunity to stuffing his administration and Treasury with banksters to raking in a million plus from Goldman Sach and other Wall Street entities to authorizing an unnecessary bailout to outright shielding them from prosecution and even criticism, Obama has shown for the last four years that he'd sooner attend a Klan rally than appear to be anti-business.

Populism is all good well but in presidential election years, it can still come at a dear price, a price that's dearer than the loss of another 170 American jobs.