Brilliant Recent Posts
People Want To Sing Along
An open letter to the unemployed seeking good jobs
It's still about the dog
The most awesomest thing in the history of awesome...
If Fox News Was Around in 1964
Gone Fishin'
Kibbles and bits
Renaissance Man.
Take Us Forever A Whisper
I Reject Your Reality and Substitute My Own: A Psy...


Sound Minus the Fury
Posted by jurassicpork | 10:49 AM 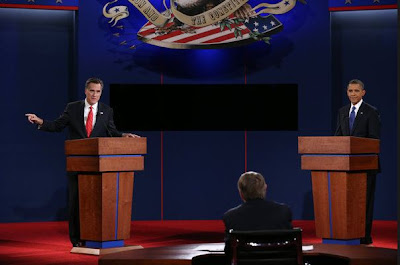 Dateline Denver, CO --- Just a few miles from where James Holmes allegedly opened fire on a crowded movie theater in Aurora, killing a dozen and wounding 58, President Barack Obama and Mitt Romney faced off in the first of three presidential debates without once mentioning gun violence. The topic was completely ignored despite pleas from some of the victims to have the candidates address it.

It was just one of many glaring omissions during a colorless debate that was civil, congenial and utterly boring. There was no mention of gun control, the Kyoto Protocol onto which we still haven't signed and never will under either man's leadership, no talk of global warming, gay rights or other things that affect the citizens of this country. But the careful sidestepping of gun control and even mentioning the mass shootings that have plagued this nation all summer long was especially audacious considering the debate's relative close proximity to Columbine and Aurora.

Of course, as we political pundits both professional and amateur know, the debates are essentially out of the candidates' hands, even if one of them happens to be the incumbent president. The topics that are to be discussed and ones to be avoided are agreed upon beforehand by both camps. As with opposing sides in a court battle, it's all about full disclosure and knowing what's fair game and what's offlimits. As PBS's Jim Lehrer had said, the Anheuser Busch-sponsored debates don't officially have any input as to what the content will be- the moderator does. But anyone who believes that hook, line and sinker ought to wear a jester cap and bells at the polling places on Election Day.

That's not to say the topics that had already been agreed upon are not vitally important. Social Security and Medicare's future and getting a handle on this nation's debt and deficit are certainly huge, complicated issues. The American public certainly deserves to know what each candidate plans on doing to fix these thorny problems.

But that's where both men ran aground last night. While certainly appeasing the large segment of the American electorate that has long since wearied of partisan bickering and attack ads, the remarkably civil "debate" between Mr. Romney and President Obama had the appearance of two mortal enemies, two relatives who loathe each other and had slandered the other mercilessly but had mutually agreed to play nice during a kid's birthday party or family get-together. For 90 minutes, the Super PAC proxy wars were seemingly forgotten.

Style points aside, the President obviously won on truthfulness, sticking for the most part to the facts while Romney kept blathering on about 23,000,000 unemployed, suggesting perhaps that Clint Eastwood did his fact-checking and Obama's "elected" quasi death panel that'll actually be made up of health care professionals dedicated to cutting Medicare costs.

While the President spoke, Romney serenely looked at him with that trademark smirk that never quite made the journey to his eyes, the patented supercilious, faux-indulgent Romney look that one would give a mentally-challenged offspring that had just picked his nose and flicked the booger on grandpa's mahogany paneling.

In spite of the desperate, flop-sweat-inspired "angry black man" meme posited by right wing nut jobs just prior to the debate, Obama was his usually reserved, civil self. Romney, on the other hand, showed more than an occasional flash of the petulant megalomaniac that refused to come on stage just before the Univision Town Hall because he'd been given only 35 minutes while the President was promised an hour the following evening.

Romney kept talking over Jim Lehrer and the president himself and seemed to get the lion's share of the on air time. He was broadly gesturing like a used car salesman on probation in a desperate attempt to sell the lies that his campaign has been peddling since Day One. At one especially pathetic moment, Romney blurted out, "I love Big Bird!" despite promises to defund PBS. Yet on Twitter, the likes of Karl Rove and other right wingers already pronounced him the winner ever since Romney threw his hat in the ring last year.

But what was much more interesting, and deeply disturbing, than where the men differed was on what they agreed. There was the Bowles-Simpson report, aka the Cat Food Commission, which has as its centerpiece cuts to Social Security and Medicaid, despite neither program adding even so much as a penny to the deficit while advancing corporate tax cuts. And, speaking of which, Obama also agrees with Romney that our poor, beleaguered corporations that own, among other things, the presidential debates, pay too high a corporate tax and that Obama thinks lowering it to 25% (a position shared by his rival four years ago, John McCain) would be hunky-dorey.

The doddering Jim Lehrer, who had tried to start out by playing the bad-ass (because he's so physically imposing) by reading the riot act but immediately losing control of the debate, was allowed to call our social safety net "entitlement programs" without being challenged or corrected by even our so-called Democrat president. Similarly, when Romney also professed his undying love for a fictional substance called "clean coal", he was not corrected by Obama, who himself expressed his admiration for the fictional energy source while on the campaign trail four years ago.

Romney, knowing fully good and well that his entire doomed candidacy relied on the outcome of this first debate, was absolutely pitiable in his increasingly desperate attempts to appeal to the broadest possible base by professing love for Big Bird, green energy and, yes, even regulation (although he said he'd repeal Dodd-Frank and replace with something else that, typically, he didn't specify.). Romney, after outsourcing about 100,000 jobs to China alone, is now fanatically devoted to job creation like the GOP cynically was two years ago! He kept denying a tax cut plan that would cut $5 trillion from the nation's revenue base. To hear Romney talk last night, he was the biggest liberal champion since Mother fucking Jones. It was almost embarrassing to hear him wordlessly scream, "Love me!"

What poisons much of politics is the mud-slinging and dead-catting and this is largely why 55-60% of the American voting public is alienated from it. But is it an attack when one candidate or another tells the truth about his sociopathic opponent's past, to bring up his stupidest, most clueless and cruelest statements? After all, despite the genteel ambiance of the debate, Romney couldn't help but bring up the wet log known as Solyndra, this year's Whitewater. Obama could've hit Romney back on any number of things that could've been based on fact but chose not to.

What we were left with was a Republican who desperately wanted to look like a populist Blue Dog Democrat and a Democrat who just as desperately didn't wish to be perceived as anti-business and, over the last three and a half years, has proved to be anything but. Meanwhile, lurking in the same neglected dimension as gun control, gay rights and climate change was the political Chernobyl Reactor Four: The Bush administration, the cause for much of the ills that's bogged down this administration and to which Romney wants to drag us back kicking and screaming. There was something missing from a debate that was obviously staged much more for the undecideds than the partisans who've already invested time, capital, hearts and minds in one man or the other. There was missing passion, a devotion to the truth and a convincing dedication to help the American people. Obama didn't truly seem to take Romney seriously and was "just there", dispensing numbers like a Coney island fortune teller giving out generic predictions.

Minus the fury, last night's debate was full of noise, signifying nothing. There was no winner but the only guaranteed loser will be 99% of the American people.
0 comments