Brilliant Recent Posts
Any Way the Wind Blows
I was so angry today
Sound Minus the Fury
People Want To Sing Along
An open letter to the unemployed seeking good jobs
It's still about the dog
The most awesomest thing in the history of awesome...
If Fox News Was Around in 1964
Gone Fishin'
Kibbles and bits 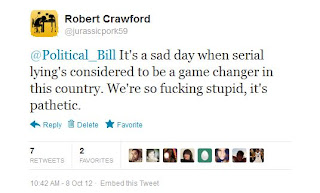 If the extraterrestrial invasion and colonization ever takes place, I can perfectly imagine the alien generals stammering to explain to their high command back home why they felt it was so important to conquer and subjugate the stupidest and least productive species in the galaxy. Perhaps, in a cosmically ironic way, they'll treat us the same way the white man has been treating indigenous people who are found to be in the way of the natural resources they ultimately want. Perhaps it's the various Star Gates in the Middle East and all over the world. Perhaps it's the wormhole portals in the North Pole and Antarctica (where we've found, thanks to global warming, three massive pyramids rivaling those in Giza in size). Either way, I find it extremely difficult if not outright impossible to believe or fathom on any level how and why we would interest an interstellar species evolved enough to get here either through wormholes or super-luminary space flight. After all, you go to the nearest zoo, not one halfway around the world.

And nothing so effortlessly brings out our inner moron than election cycles, especially in the United States. Here we are, with more sophisticated technology at our fingertips than at any other time in American history yet we consistently betray year after year an impenetrable cluelessness that's so faithful and so perennial the Republican Party actually factors in that complacency and just plain shit-stupidity as part of their campaign strategies.

Otherwise, how else can you explain all the myriad reports that Romney "won" the debate in Denver and he delivered "a surprisingly strong performance", as one hack wrote in the PuffHo earlier today (Find it yourself. I don't link to plantations)? How does one explain all the polls "showing" Romney to be leading the president even after train wreck TV appearances such as this one between Soledad O'Brien and Romney's own senior communications director who cannot form a coherent thought or sentence and feigns ignorance in her risible attempts to, you know, communicate her man's positions on various topics?


@msterrymcmillan What's not to like? He dodged Vietnam, taxes, wrote off 1/2 of us & doesn't give a shit about the poor. #waitingtoinhale

As Caleb Carr warned us in Killing Time, "Information is not necessarily knowledge."

We all know why pollsters lie, why the MSM lies. Elections guarantee ratings and who wants to follow a one man race where the outcome was predetermined as it was up until the minute Jim Lehrer lost control of his bowels, his bladder and the Denver debate one nanosecond after it had begun? Most pollsters are in the tank, such as the right wing Rasmussen (although their last poll conducted right after the debate showed Obama with a one point lead).

So Romney was allowed to machine gun one lie after another, 27 in 38.5 minutes, according to Think Progress, a simple fact you would think would be inescapable to the corporate MSM. But to admit that Romney lied virtually every time he opened his crêpes  Suzette hole is to admit the Republican challenger is a serial liar and quite likely a delusional psychopath, which would be the end of the race. Romney could have taken out a baseball bat from behind the podium and done an Al Capone on the 78 year-old moderator just for interrupting him and half the talking heads on the boob tube would've been faulting the president for not showing more initiative.

So it all comes down to us, my fellow Americans, people who've seen fit to elect and often re-elect the most insane people on the planet to represent our district, our state, our nation. We've put in power and kept in power morons and psychopaths like Sonny Bono, Fred Thompson, Ronald Reagan, George W. Bush, Michele Bachmann, Jim Inhofe, Alan West, Paul Ryan, Joe Walsh, Steve King, Tom Tancredo, Peter King, etc.

Is it any wonder why I don't give our species much chance of survival? We graduate from 4G to 5G technology and think we're kings of the fucking world without once hitting upon the irony that the information we harvest from those fancy $200 phones hardly ever qualifies as actual actionable knowledge and, while further shrinking the world, it also widens the gulf separating it from us.

Our species makes bad decisions. That's part of being human. Yet, what has consistently kept our species from progressing in an unbroken linear path of perfectibility is very simply an inability or unwillingness to learn from our mistakes both personally and collectively.

112 years ago, nearly 40% of all cars in the US were electric. As of this month, that number's shrunk to less than 1%, which is exactly how the other 1% likes it. And we'll happily or somewhat unhappily continue paying $4 or more for a single gallon of gas because we've been trained to believe this is what being a motorist is supposed to be like. Just as our kids are growing up believing that invasive and humiliating criminal and credit background checks are a normal way of doing business, that we live in a two party democracy, etc.

So that's why, when I hear of Americans being "mostly liberal", I have to laugh because both nationally and globally, our species is just as conservative and loathe to evolve as most any animal species. In fact, the genetically-enhanced human race is perhaps unique in the universe in that we seek to justify by philosophical, religious and political means a resistance to necessary evolution.

You think I'm crazy? Consider people such as Pam Gellar, Jason Mattera, Ann Coulter, Sarah Palin, Dinesh D'Souza, Jerome Corsi, and Christine O'Donnell and other morons, serial liars and psychopath conspiracy theorists, people who would've been sued, hounded, prosecuted and/or institutionalized out of the public eye in a more intelligent day and age. While I'm no Communist and Socialist and believe in a person's right to make an honest buck, the operative word here is "honest."

I have a major problem with racists, religious snobs and professional prevaricators who get one book contract after another without the publishing business devoting even half a nanosecond of thought that these people and their ghost writers are making tons of money by subtracting from and/or polluting the national well of knowledge. And we, the people, legitimize these pragmatic business decisions by buying this crap because we don't care about the truth nor will ever truly realize that seeking and finding the truths in this planet will set us free from the primordial ooze once and for all.
3 comments

Bob said...
Unfortunateky, The President will not get the opportunity again that he had in last week's debate, which was to rub Romney's face in the shit spewed during the primary to placate the radicals. All Romney did last week was appear reasonable, although he had to serially lie to do it. Since that worked so well, he'll lie again in the foreign policy debate. He'll go "USA USA USA" until almost every white male in America is dribbling beer in a frothing rage to drop a couple of big ones on Iran. But really, if there can be a ten point swing based just on that "debate", maybe we deserve Romney.
10/9/12, 4:48 AM

Fred Drumlevitch said...
A great post. There are many factors that have created our current problems, and public stupidity must certainly be ranked among the very top few. But our current politicians --- indeed, most any politicians --- have no desire to reduce public stupidity, it's what allows most of them to either gain or stay in office. Even an enlightened politician such as Bernie Sanders won't address the matter (though he probably knows full well the reality of it), because calling the electorate "morons" is not likely to win votes.

In order to understand the pathetic nature of our choices in most elections, one needn't listen to the talking heads, examine polls, or even a look at what passes for political advertising. Just the regular everyday television fare plus the magazines and tabloids for sale near the supermarket checkout counter say it all. And the people who watch and read this stuff do apparently vote, how else to explain the messages that the candidates deliver?

As far as the publishing business that you referenced is concerned, consider this: As a test two decades ago, someone sent to twenty-two publishers a manuscript that was just the text of the first three chapters of "The Yearling" verbatim. Only one recognized it, and the rest either rejected it or didn't respond.

Hate to quote maudlin song lyrics at you, but if humans keep dumbing themselves down, I kind of hope wolverines rise and take over for the second chance!
10/9/12, 8:26 PM
Post a Comment
<< Home
Contact
Home
Email:
brilliantatbreakfast at gmail dot com
RSS