Brilliant Recent Posts
What's in a Number?
The Picture Mitt Romney & the GOP Doesn't Want You...
The Cheshire Cat's Sodomization of Goober and Othe...
Here's something I missed
Just checking in....
Malala Yousufzai
Planet Moron
Any Way the Wind Blows
I was so angry today
Sound Minus the Fury 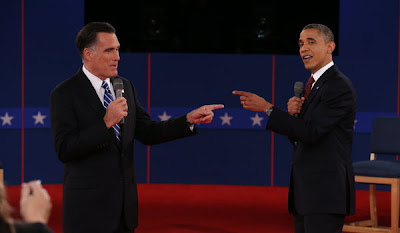 I could be disingenuous and fake it by, in Romney-style, retroactively watching video, read the summaries in the media, on Twitter and elsewhere and pretend I was there the whole time as if I was an NBC sportscaster doing canned commentary during the Olympics. But I've tried to be honest with my readers even if it embarrasses me. After all, with no journalistic credentials, my word and my reader's sense of trust in me is all I have. So I'll just start this post right now with an admission that I wasn't interested in last night's debate and didn't watch it, not even on video.

So what was this otherwise politically-engaged wonk doing while Obama was doing the Hulk-Against-Loki thing in Hempstead, NY, my old stomping grounds? On Youtube watching videos of Bob Dean, former Command Master Sergeant, talk about a world that we don't even know exists, a world in which each year a trillion and a half dollars of our treasure is going into a black budget to fund reverse-engineered extraterrestrial technologies, programs and organizations that Obama's government won't even hint at, they despise our opinion, and us, so much.

But that's grist for another mill.

I didn't watch the debate last night because #1 a blind man could see that Romney was going to come prepared with another pack of lies and #2, Obama, knowing he'd fucked up the first time, was going to come out swinging against Romney and make it personal.

In other words, it promised a long time ago to be a stereotypical political debate complete with the mud-slinging and dead-catting that Ambrose Bierce wrote about a century ago in The Devil's Dictionary. And, as with so many other people, I'm sick and tired of it.

But today I've been getting a slight bulge in traffic from people from all over the world looking for information on Romney and Google and other search engines are sending them here. And all they have to read are now non-topical posts I'd previously written. Plus, I'm sure a few of my readers, maybe more, are curious about what my take is on last night's debate. So here they are.

My choice for President, the person I'll still likely vote for, Dr. Jill Stein, got arrested along with her running mate last night in Hempstead for having the temerity for trying to crash the party and the Powers That Be just couldn't have that. So, my pick for President was sitting in a jail cell last night while the two assholes going at each like the two rats in Winston Smith's face cage deserved to be in prison.

Because Romney's a tax dodger who took full advantage of that tax amnesty from three years ago and Obama is a war criminal. That's all there is to know. That's all there is to see. You can talk until your face is a right proper shade of Democrat blue about Obama's endless tepid reforms and it still doesn't justify murdering scores, if not hundreds, of innocent women and children in Afghanistan, Pakistan, Yemen and God knows where else. If you vote for Obama, you're doing so with blinders on. You'll be supporting a current war criminal over a future war criminal. Blinders vs binders.

However, it's important enough to know, and one needn't have seen the Pier 6 brawl in Hempstead last night in real time to know that Mitt Romney is a lying piece of shit who'd actually referred to women being in binders. If there's a corporate gene in the human genome that makes carbon-based humanoid life forms heartlessly corporate and with all the sociopathy that goes with it, then Willard Romney is a guy who'd gotten a double dose. I've been saying for four years now that if Romney ever gets elected, he'll be the first chief executive to deliver his inaugural address as a Powerpoint presentation and fax his State of the Union Addresses to Congress.

He lied about his tax plan, he lied about the president's remarks on Libya on September 12th (after he himself had fucked up everything in his bumbling attempt to capitalize on the deaths of four Americans), and, with the sense of emperious entitlement that, from his birth, has been part and parcel to what passes for his character, he interrupted the moderator Candy Crowley on many, many occasions because no one who's worth less than a quarter of a billion dollars should interrupt someone who is.

Obama had every right to attack Romney for his vulture capital past and for shipping jobs to China. But Obama was merely telling us things we either know or should know about Romney. And he dead-catted Romney without once mentioning Bainport or the Sensata workers who are even as I write this getting arrested by the Freeport police just as Jill Stein got arrested last night in Hempstead. Sensata is a third rail for both parties and both candidates and, as usual, the working man gets the shaft.

I didn't watch the debate last night and opted for truth, forbidden fruit that either man would deny us, forbidden knowledge that even a temporary leader in office for 4-8 years would be denied by captains of industry and the Joint Chiefs. I'm tired of this election cycle, tired of how they've extended it so that the incumbent has to spend the last two years of his first term running for office again, tired of the endless debates, pushed-up primaries and caucuses of the challenging party and tired of listening to corporately-owned MSM talking heads telling us about body language and what Romney had for dinner before each debate.

The important takeaway from this is that Bainport is radioactive and neither man has the stomach nor the heart to fight for these people because the populist surge they'd get even just for mentioning them isn't worth enough to risk going after.
0 comments