Brilliant Recent Posts
Can he possibly be this stupid?
I need this today
How Very French Of Us
How It Works
The Other F Word
Willard Rmoney would have let him drown because he...
Do you really want a president this petty?
Taxes are for the little people
"O, the Inhumanity!"
Probably because his petzele is the size of a pretzel


I Reject Your Reality and Substitute My Own: A Psychological Profile of Mitt Romney
Posted by jurassicpork | 10:10 AM 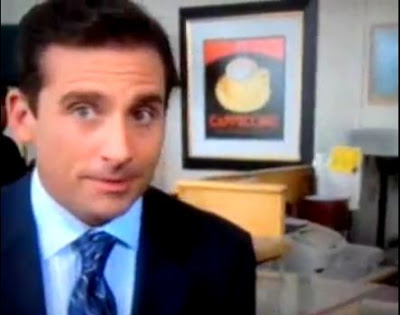 In the 10th episode of Season 4 of The Office, Michael Scott, the self-centered, bumbling manager of Dunder Mifflin's Scranton branch office, goes on a blind date set up by one of his subordinates. He'd just broken up with Jan, his boss, and wanted to start dating again. He goes to the coffee shop and he says out loud he needs to look for a brunette wearing blue jeans and a black top, sees a hot blonde wearing a skirt and instantly deludes himself into thinking they're the same woman. 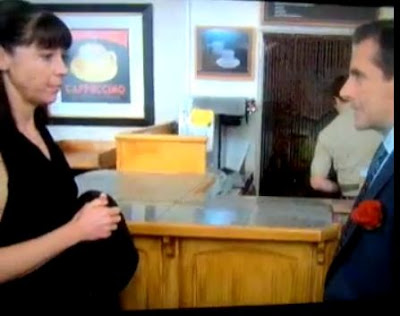 Scott tries to introduce himself to her and she completely ignores and brushes past him. When his real date shows up, he then tries to claim he's not Michael. During this already crashed and burned blind date, Michael rubs his temple and does a horrible impersonation of someone who actually has the slightest interest in his date's life and what she does for a living. Art imitating life or vice versa?

This is a perfect synecdoche of Multiple Mitt Romney and the Republican Party in general, people who are given one set of facts and refuse to acknowledge or even to see them because they think truth is actually negotiable. This is why the GOP is accusing pollsters who show the president widening his lead with over-polling Democratic voters and skewing the results. Romney refuses to see the 6 point split in the latest (right wing) Rasmussen poll and insisted on NBC that the race is tied.

Lord only knows how Mitt Romney got elected Governor of Massachusetts. We're a state that, until Deval Patrick (who is himself no liberal and made over $10,000,000 as head of Coca Cola's legal department who went to bat for the soft drink giant to deny his own people civil rights), had elected almost exclusively Republican governors. Under Romney, Massachusetts was 47th in the country in job creation. Gay marriage was passed on May 17, 2004 over Romney's most strenuous objections and he'd dissolved a commission that was intended to address and stop anti-LGBT bullying. Aside from winning the gubernatorial election in 2002, Mitt Romney has lost every other race he's ever run in, including the Senate election in 1994 and last general election. Mitt Romney has given more concession speeches than perhaps any politician this side of Lyndon Larouche.

Mitt Romney is the Michael Scott of American politics, a hopelessly deluded, socially-retarded man who has done one thing right in his entire life: Make lots and lots of money and put people out of work. He constantly misrepresents himself, contradicts himself and betrays himself as a pure, self-absorbed sociopath, the Baron of Belmont who doesn't understand why people don't love him after he pisses on those below him. And in Romney's case, it's not even as if he's capable of acknowledging the fact that no one really likes him because he actually thinks this is a neck-and-neck horse race.

Mitt Romney is hopelessly insane in both a clinical and colloquial sense, a man who has yet to quantify his monstrously outsized ambitions by moving beyond them and articulating to the American people what exactly he wants to do. Sure, he said he wants to do away with Medicare, Medicaid and Social Security and repeal "ObamaCare", the bloated, conjoined twin of his disastrous and infinitely corrupt health care "reform" in Massachusetts that he's now pathetically claiming is proof of his empathy.

But during every presidential campaign, Romney gives the impression of a man who's most concerned with getting into the White House first and then deciding what he'll do. Michael Scott had his Mitt Romney moment when the coffee shop barista called him by name after he'd tried to weasel out of a blind date with a plain-looking woman by claiming he wasn't who she thought he was. Well, more and more of us are finding out just who the real Mitt Romney is and we're not liking what we see.
0 comments