Brilliant Recent Posts
Take Us Forever A Whisper
I Reject Your Reality and Substitute My Own: A Psy...
Can he possibly be this stupid?
I need this today
How Very French Of Us
How It Works
The Other F Word
Willard Rmoney would have let him drown because he...
Do you really want a president this petty?
Taxes are for the little people

It's sometimes difficult to get emotionally involved with baseball these days. This most poetic of games has become, like everything else in our society, a simple matter of dollars and cents. New ballparks that charge sky-high ticket prices. Players chasing ever-more-obscene contracts. Owners tainted by association with scam artists.

Last weekend I had the rare pleasure of being able to actually sit and watch a movie, and that movie was Moneyball, last year's Academy Award-nominated film based on Oakland A's GM Billy Beane's book of the same name. For all that there's something formula about it, there's also a hint of melancholy that hovers over the movie, which doesn't have the Big Dramatic Happy Ending that we expect from baseball movies. In baseball movies, the GM who failed as a player is supposed to win the World Series with his ragtag team of cast-offs and never-wases. The star manqué who after mysteriously vanishing, refuses to take the dive and hits a home run right into the lights, causing a shower of sparks to appear on the field. The lunatic who builds a baseball field in his farm succeeds in reuniting with his long-dead ballplayer father. A good baseball movie is supposed to leave you blubbering, because baseball is about nostalgia, but it's also about timelessness. It's a game that despite better bats and nutrition and workout equipment and performance-enhancing drugs and the multimillion dollars is still, as Trey Wilson's baseball manager in Bull Durham says, "...a simple game. You throw the ball...you hit the ball...you catch the ball." It's the same game that Honus Wagner played, and that Babe Ruth played, and that Jackie Robinson played, and that Reggie Jackson played, and that Gary Carter played.

And occasionally there's a Story. It's about Jim Morris, the A-ball dropoout who promised the high school baseball team he coached that he'd try out for the big leagues if his team won the district championship. Miraculously, at the age of 35 and after a number of surgeries, Morris had somehow developed a 98 mph fastball. He made it to the big leagues, even if only for a short time. With a Story like that, you get portrayed by Dennis Quaid in the movie. Or it's a story about Jim Abbott, who was born without a right hand and not only made it to the majors, but threw a no-hitter for the Yankees. The movie practically writes itself, and it's surprising that no one's made a movie about him yet.

And then there's this guy. Meet R.A. Dickey: 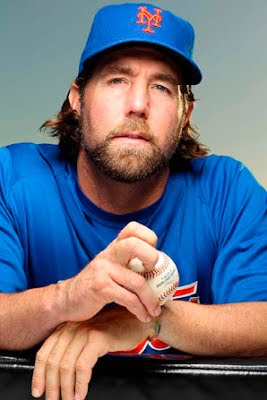 Two years ago, knuckleballer Dickey was cast off by the Seattle Mariners after rattling around the majors since 2001 and signed to a minor league contract by the Mets in 2010. This year, on a team that was supposed to find itself in a no-return spot in the basement of the NL East by now, Robert Alan Dickey is 7-1, with a 3.06 ERA. The story of a 37-year-old knuckleballer coming out of nowhere to became a near-ace (and "near" only because Johan Santana has come back as if he'd never left) is already enough to make a movie, or it will be if the Mets somehow manage to emerge from the shadow of Bernie Madoff and make it to the post season. This prospect is not as ridiculous as it sounds, because as of this morning, the Amazins were six games over .500, a game and a half out of first place -- a third of the way through the season. And Dickey was just named the National League's Player of the Week. This in a league that boasts the likes of Philadelphia's Cole Hamels and Washington's phenom Stephen Strasburg.

If Dickey were just a story of yet another guy who was on the verge of giving up baseball, only to finally get his Big Break in the Bigs, no one would buy it, because Abbott has a more compelling story and Jim Morris has already been done. But Dickey may be baseball's first true Renaissance Man.

This is a guy who studied existentialism and modern American literature at the Christian college he attended. This is a baseball player who is currently reading “Blind Willow, Sleeping Woman: 24 Stories,” by Haruki Murakami, likes sushi, is partial to Chopin's Nocturnes, climbed Mt. Kilimanjaro last January, and wrote a book in which he revealed that he was sexually abused as a child -- hardly the sort of stuff professional athletes want to admit. He's accessible to the fans, he's worked with a charity that rescues girls from sex traffickers, and he's a born-again Christian. He's what people THINK Tim Tebow is.

And here's his speech after being inducted into the Tennessee Baseball Hall of Fame:

The wonderful thing about R.A. Dickey, what makes him a true role model, is not that he can throw a knuckleball for strikes, or because you can say that those six games over .500 that the Mets are can be attributed to R.A. Dickey's knuckleball. It's because this is the best of what an American Christian man can be. He's pious without being self-righteous, his faith is humble, he recognizes that there is no incompatibility between the life of the spirit and the inquisitive mind's quest for knowledge. No matter what your spiritual path, no matter whether you follow baseball, there's no disputing one hard and fast fact: R.A. Dickey is a mensch.

krissthesexyatheist said...
I heart me my baseball. It saddens me that the current youth (youth sports) are not focused on the B-Ball. Even better than that. I heart me the knuckle ball (and the knuckle baller's). Dammmmmm. Such a great endeavor.

Anonymous said...
University of Tennessee - Knoxville is a Christian college?

The New York Crank said...
Baseball has always been a game about individuals and personalities. In football, everybody's moving at once, little dots running around the field. Their heads are covered with helmets, their bodies disguised by padding. If not for the numbers on their jerseys, it'd be hard to tell who's who. Similar things apply to, say, hockey.

But baseball is a leisurely game where only one or two, or possibly three or four people at most do something at the same time. The others wait their turns. And with the exception of the catcher, nobody wears a mask.

Consequently, you get time to study the sneer on the pitcher's face. You can see, as if studying a slow ballet, the body language of the pitcher and the batter. You can enjoy the mischief of the first base runnerf trying to steal second. You can enjoy the individual quirks - spitting, scratching, studying the baseball, even scratching more-or-less private body parts.

Football and hockey and soccer are about mass mayhem. Baseball is about singular action by singular people. It is as American as individualism.

On another note, I'm sorry to hear about your mother. And your cat. Beyond that, there's nothing I can say, except that when crap happens, it seems to happen all at once. Hang in there.

pbriggsiam said...
What a very nice post to run into this afternoon! Thank you for this!