Brilliant Recent Posts
Here they go again
Ten Years On
Lesley Gore: You don't own her
Black and White Noise
Why I Love the Internets
Separated at Birth?
Cutting off your nose to spite your face
For Sale, One Democracy, Slightly Used of Late
From Switzerland, With Love
Saturday Scumbag Blogging


Did Mendacious Mitt Help His Buddy Cheat on His Alimony? (w/updates)
Posted by jurassicpork | 10:46 AM 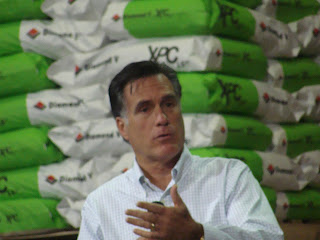 Mitt Romney and sacks of fertilizer. What's the difference? The sacks of shit behind him don't lie.

As I write this, noted liberal attorney Gloria Allred and her client are at  Norfolk Probate and Family Court in Canton, Massachusetts. Her client is Maureen Sullivan Stemberg. So why is that so important?

It's important because Allred is uniting with the Boston Globe on a motion to impound the now-sealed court records of the Stembergs' War of the Roses-type divorce in 1991. The story was broken by the muck-raking TMZ as well as the Globe, Time magazine and Daily Kos, the Huffington Post and others. And they're trying to get the court records unsealed and gag order lifted because the Globe got a tip that not only did Mitt Romney testify on behalf of his buddy Tom Stemberg, the founder of Staples, but he'd even helped his campaign surrogate lie about his corporation's worth (And, remember, Staples was supposed to be Bain Capital's first great triumph, if the definition of "triumph" is in not bankrupting a company they'd taken over and ship all the jobs to Communist China). But 21 years ago, a few years after the company began taking off, Romney had supposedly testified during the divorce proceedings that, gee, maybe I'm not such a great businessman, after all, and my poor CEO friend Tom here really isn't worth as much as his mean estranged wife and divorce lawyer are claiming he is.

Regarding the actual worth of the company, here's Tom crowing in his own words about the company during those heady salad days in an interview with Parade Magazine just late last August:

We had a board meeting in the early ‘90s, and by this time, Staples was a multibillion-dollar operation. It had a delivery business, a contract business, and an international business.

Note he said, "the early '90's." Which was no more than a year or two after the divorce. And we're supposed to believe that Staples' stock had benefited from some miraculous, quasi-religious turnaround in its fortunes so that in 12-24 months it had been transformed from a start-up company into a global multi-billion dollar corporate giant, a success that neither Stemberg, Mitt Romney nor anyone at Bain Capital could've foreseen? It's a miracle, brothers and sisters! Hallelujah!

The other half of the story, the aftermath, ought to be considered at least as important as Multiple Mitt committing perjury on the stand 21 years ago. Says TMZ,

Sources tell us ... Tom also got custody of the couple's one child, making allegations of abuse against Maureen. And get this ... in the mid-90s, after the divorce, Tom sent the boy a letter saying, although he loved him, because of issues related to the divorce "it will not be possible for you to be a part of our family for the foreseeable future." Maureen lost her home in the process and struggled financially.

In other words, Stemberg and Mitt treated Maureen Sullivan Stemberg (an MS sufferer as well as a cancer survivor) and son as if she was just another one of Bain Capital's tens of thousands of employees who'd just lost their jobs to downsizing or outsourcing or offshoring and left to fend for herself.

Meanwhile, weeks after the divorce, Mittens and his buddy Stemberg broke their necks getting to Goldman Sachs and sold their "overvalued" stock for a mint.

I have to admit, I find Allred's and her clients' timing a little suspicious, what with election day in 12 days. But if perjury was indeed committed, condemning a mother and child to poverty, then justice certainly has to be pursued. And one has to wonder, in the event the Romneys ever get divorced, if Mitt will lowball his own offshored fortune just to fuck over Ann, another wife of a rich man who suffers from MS and is a cancer survivor? My guess would be, Abso-fucking-lutely yes because right wingers are greedy sociopathic scum first and husbands and fathers ninth or tenth.
0 comments