Brilliant Recent Posts
Condescending, arrogant prick.
"This is a beyond-strange situation"
The Man Who Fell to Earth, Redux
But will there be locusts?
Did Mendacious Mitt Help His Buddy Cheat on His Al...
Here they go again
Ten Years On
Lesley Gore: You don't own her
Black and White Noise
Why I Love the Internets


The News at a Furtive Glance: No Heart, All Chattle Edition
Posted by jurassicpork | 6:21 PM 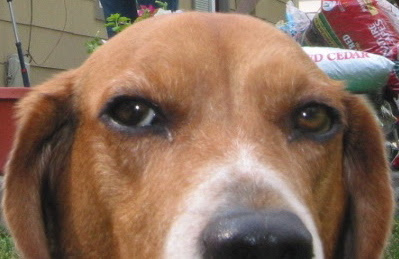 In the ironically-named town of Defiance, Ohio, Willard Romney (aka "No Heart, All Chattle") continued his Merry-Go-Round of Mendacity by once again flying in defiance of the facts by telling Jeep autoworkers their jobs were probably going to get sent to China, even though as Greg Sargent and others point out, that's simply untrue. What is true is that Romney's Bain Capital is about to ship 170 American autoworker jobs to China by the day after election day. But, of course, Willard doesn't want to talk about Sensata. 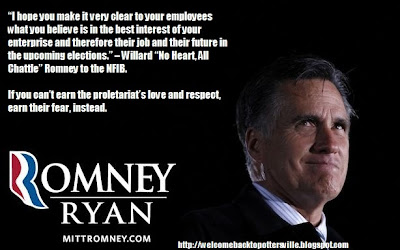 It's obvious by this time that Romney is viciously desperate, he's resorting to employee intimidation, even encouraging the NFIB to adopt the same vote-steering intimidation tactics that corporate scumbags have been using since the 19th century.


Who's the welfare queen, now?

Last March, ABC News had dug up a long-forgotten video of Willard Romney while he was running for Governor of Massachusetts telling business leaders how they can game the system and get all sorts of free money from the federal government. In this video, Romney sounds like the stereotypical Republican version of the welfare queen informing other wouldbe moochers on how to milk Uncle Sam for everything he was worth (including from, outrageously, the Department of Education that he and every Republican in the land would love to erase from existence). Romney even brags about his friends on the inside who helped saved the Olympics with what would eventually come to a $2.7 billion bailout courtesy of John and Jane Q. Public.


Here's John McCain essentially excoriating Romney and the Senate for this bloated Olympic budget, the solvency for which he's taking credit on the campaign trail. It's amazing to remember that just four years ago, or eight years after this speech, McCain seriously considered making Romney his running mate. Then he saw his tax returns and reconsidered. Or maybe he remembered this righteous speech and the fact that the $1.3 billion price tag for Salt Lake City more than doubled.
With the predatory nature of banks these days, it would take a hell of a story to blow away all the ones you've heard. But I have one. Wells Fargo illegally evicted a terminally-ill woman despite a court order forbidding them from doing so. Actually, it's triply illegal because Niko Black never had a mortgage with Wells Fargo and since all of her health care is home-based, evicting her also violates the Americans With Disabilities Act. When the Sheriff's Dept. came in after kicking her door down, they had their guns drawn and one trigger happy Deputy Dawg by the name Sergeant Bob Sima actually put a gun to the 100 pound terminal cancer patient's head, with his finger in the trigger well and safety off (which, of course, he's now denying on AM radio). Here's the online petition pertaining to Niko's case that you may like to consider signing. At last count, they needed only 337 to meet their goal.
Via the incomparable Susie Madrak at Crooks and Liars comes this ironic tale of autoerotic Republican buttfuckery disguised as "austerity" measures. So, if Willard, who's been followed by hurricanes since last August, is going to complain about Hurricane Sandy, the so-called "Frankenstorm", then he only has right wing austerity measures to blame for the lack of weather satellites on which we rely for our meteorological news more than most of us realize.
A former Hart Intercivic employee came out of the woodwork last week to tell us about the fraud, criminal negligence and abuse of the public trust at Hart that led him to quit after two years. My question is, why aren't more of us listening to this whistleblower with the election coming up in 10 days? Especially since it also came out last week that Tagg Romney, Mitt Romney's brother Scott, his wife Ann and "former" company Bain Capital all have a financial and political stake in their newest acquisition?
Remember when Mitt Romney recently said, "I'm not like Bush?" Well, you could've fooled... fooled us, you can't get fooled again because, wow, it seems Wiilard's surrounded himself with many of the rats from the Bush administration. 17 out of his 24 senior policy advisers, to be exact. Who are they?

Wow. And we were worried when Obama surrounded himself with the exact same fuckups who worked for the Clinton administration.
What Sir Drifty sez. The Photoshopped lead picture alone is worth going there.
0 comments