Brilliant Recent Posts
Willard Rmoney would have let him drown because he...
Do you really want a president this petty?
Taxes are for the little people
"O, the Inhumanity!"
Probably because his petzele is the size of a pretzel
Fear and Loathing on the Appian Way
Greetings from one of the people Willard Rmoney ju...
Diplomacy is Not an Option
Chickenhawks
Pic o' the Day 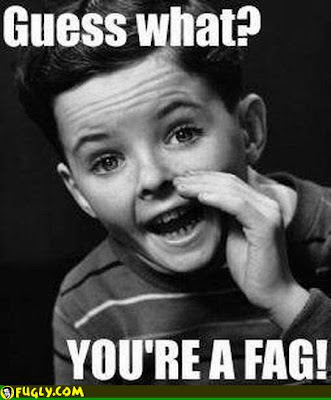 Just last night, one of my Twitter followers openly and simply asked me, "Are you gay?"

It seemed rather abrupt and a little tactless but since I'm now open about my sexuality, I answered that I was "ravenously bisexual", that I loved long-haired guys then asked him why he asked. His response was that he'd seen my occasional tweets advocating for LGBT rights, my desire to contact other bisexual and gay males on Twitter and a drool over one hot guy or another and was torn over deciding if I was gay or straight.

I again responded that I was openly bisexual and that he was both right and wrong. He responded by saying that he didn't mean any disrespect. There, I thought, the matter would rest. But Twitter sucks at emailing you updates and it wasn't until I logged on to my Twitter account this morning that I saw his final question of the night: "What's the most derogatory name you can call a gay person?"

An hour or two later, I was revisiting his question and my subsequent answer and it occurred to me: Why doesn't every straight person know this? I'd think we'd all know what taboo words not to use in front of women, African Americans and so forth. Now, my Twitter friend Chris is a well-meaning, open-minded guy and is certainly not a vicious homophobe or bigot. And I wondered how many other straight people are so clueless about the LGBT community?

Because how can even liberals like my Twitter friend hope to understand us if they don't even know what offends us the most let alone why these things offend us so much?  It seems there's still a huge set of blinders that many heterosexuals have on both eyes regarding the LGBT community. Straight folks seem to hold out the possibility that perhaps there's no word that enrages us and that reduces us to abnormal, carnal animals and nothing can be further from the truth.

And if a well-meaning, open-minded guy like my friend Chris can be so clueless, what chance do we have of educating the truly vicious homophobic bigots out there like the fat slob that sliced open a man defending his transgendered girlfriend at a certain notorious McDonald's in Greenwich Village, the place where the gay rights movement started in 1969 on Christopher Street?
0 comments