Brilliant Recent Posts
All that tea party outrage against immigrants who ...
Made of Patterns That Can Scarcely
Show Tune Hipsters
News You Can Use
The Scarlet Letters
Caturday
Dickless
Next up: Scarlet Letters
And it will be because we were too busy laughing a...
Balls to the Wall 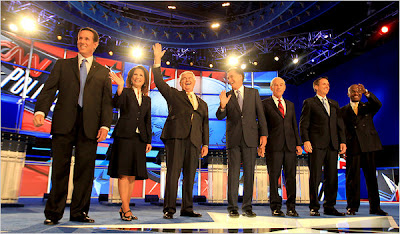 Calvera: If God didn't want them sheared, he would not have made them sheep.

Vin: You elected?
Chris: Na. I got nominated real good. (right after Chris got the end of his cigar shot off.)
The Magnificent Seven

Last night's "debate" amongst the first 7 GOP contenders was not actually a debate as seven morons who had only one message to convey: The n****r must go. Another problem: Having these seven lunatics on stage so they could agree with each other about how awful the black guy is is like having a pole position heat before all the drivers have arrived (Palin, Perry, Huntsman, etc).

True to form, the MSM such as the increasingly right-leaning NY Times and host network CNN, never once to my knowledge asked themselves, "Gee, Election Day is almost 17 months away. We're not even close to caucuses or primaries or anything substantial in the way of conservative voter preferences. Isn't it kind of early to be having a GOP debate in which the participants don't actually debate each other?"

True to form, the Magnificent 7 couldn't offer anything magnificent at all, not even broad strokes, and Michele Bachmann became the darling of the night when she pathetically blurted out like a Tourette's patient, "Obama's a one-term president!" without demonstrating in either word or deed how the Republican Party is going to somehow manage that feat of right wing political engineering. 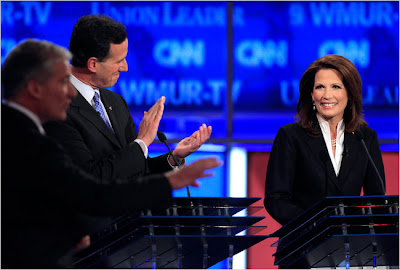 "Thank you for not pointing out how bat shit insane I am, Rick, even though you can't talk."

Oh sure, they mentioned jobs for the proles and how little Obama has done about that. But in reality the only job that counts is the one these six lily white people and their token want. If the Republican Party actually gave a shit about jobs, they would've addressed the issue after taking control of the House this past January instead of avoiding the subject.

Summer product launches (remember what Andy Card said about them taking place in August?) are never a good idea. John McCain had his product rollout in late August 2008 and look how well that worked out for him.

And if Sarah Pailn's cherry-picked emails (cherry-picked by her successor after she cut and ran from Juneau) show her to be an "engaged" and "dedicated" leader, if her freshly white-washed administration, with the help of the media, represents Sarah Palin 2.0, the Ultimate Reboot, then last night's pathetic assemblage of contenders should serve to show how intellectually, politically and charismatically anemic the GOP truly is these days.

Pangolin said...
To be fair this coming election is going to be about nothing at all since the Obama administration took the Bush agenda and ran away from the Democrat rank and file like we had rabies.

The ONLY way we're getting jobs back in the U.S. is if we take some of the cookies away from the wealthy and share with all the other people. Ok, most of the damn cookies.

Climate Change, Peak Oil, Financial Fraud, Automation are all destroying your average citizens prospects of even a stable life of drudgery. The politicos are offering big rock candy mountains on the Dem side and a kick to the curb on the GOP.
6/15/11, 9:50 PM
Post a Comment
<< Home
Contact
Home
Email:
brilliantatbreakfast at gmail dot com
RSS