Brilliant Recent Posts
Caturday
Dickless
Next up: Scarlet Letters
And it will be because we were too busy laughing a...
Balls to the Wall
David Vitter, patronizer of prostitutes, is still ...
What part of this is so difficult for the punditoc...
Why do the media take these poeple seriously?
Can we please stop saying that Medicare won't chan...
That Woman Is An Idiot 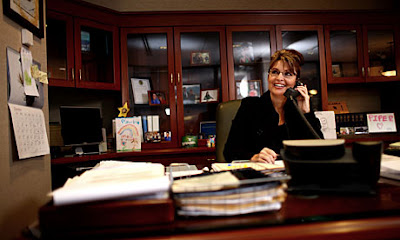 Is anyone else suspicious about the Sarah Palin Chronicles that just happened to be released when media frenzy about her possible run for the presidency is at its height, and when "Rolling Thunder" and her "One Nation" bus tour hit the east coast?

You know the ones I mean. The 24,000 pages of letters from her state email and private email accounts up until her rather hasty resignation when TrooperGate began rearing its ugly head? The Yahoo emails given the "lamestream media" by Palin herself, the ones that "paint a picture of an image-conscious, driven leader, closely involved with the day-to-day duties of running the state and riding herd on the signature issues of her administration"? The ones that also purport to show "a woman striving to balance work and home, fiercely protective of her family and highly sensitive to media coverage. She expressed a sometimes mothering side with aides but also was quick to demand answers or accountability"?

You know, those emails.

The word "paints" is an unintentionally revealing one because "to paint" implies some intelligent design and an attempt to convey some sort of personal vision or to imply, project or even impose some sort of subjective reality. And the timing of this uncharacteristic "disclosure" has about as much spontaneity to it as, well, a presidential photo op.

One of the greatest ongoing comedies and tragedies of the mainstream media is the self-serving yet ultimately vapid and self-destructive relationship between it and Sarah Palin.

In true Republican fashion, Palin has never shied away from blasting the mainstream media that, with a middle school child's love for cheap and obvious puns, she never tires of calling the "lamestream media". However, her diplomacy with the MSM always miraculously comes to the fore whenever she appears before some network or another to pimp yet another ghost-written pack of lies and other name-calling or some TV show or another with the Palin brand name on it.

And the MSM keep going back for more with the viciously comic recidivism of a recovering sex addict going to Amsterdam's Red Light District. As stated earlier, this unhealthy obsession with Palin that afflicts the MSM is a tragedy to those of us who care about the truth and the issues and a farce to those of us who simply no longer give a flying fuck and have long ago written off the MSM as irredeemably imbecilic and corrupt.

The marvel of this obviously carefully cultivated and choreographed "disclosure" isn't that there are no "Gotcha!" moments but that Palin and the MSM each think we're stupid enough to fall for this and be completely insensible to the dead giveaway of the timing, that we'd all suddenly slap our foreheads and say when this burnished and pretentiously presidential image of a nonexistent Palin came out, "Duh! we were all so wrong about the poor woman!"

But to those of us in the reality-based community, the whole thing smells as much as the also suspiciously-timed Branchflower report that found Palin innocent of any wrongdoing the day before the Presidential election.

The press either doesn't know or doesn't care that Palin is political junk food that simply is no damn good for either them or those who consume the pap they trowel out that ludicrously passes for news, that in a country of American, Swiss and cheddar, Palin is Velveeta or Cheese Whiz straight out of the can.

That would be the Palin who tried to fire an Alaskan State trooper and fired Walt Monegan, the Commissioner of Public Safety who refused to fire Trooper Wooten over him being simply a former brother in law. There's no hint in these letters of the facts that were unearthed by the toothless yet still-entertaining Branchflower Report, nothing to even suggest "a shadow office" manned by Todd Palin that was literally an enclave within Palin's office within her line of sight, a shadow office that was dedicated to one thing and one thing only: Firing Trooper Wooten for having the colossal bad luck of being Sarah Palin's former brother in law.

There's nary a breath of the elsewhere underdeveloped scandal involving the corruption behind the building of the Wasilla Sports Center or Palin's flipflopping about Don Young's Bridge to Nowhere and her rejecting the nearly quarter billion in earmark money for the bridges after accepting it but then keeping the money for the road that led to those bridges.

If nothing else, the Branchflower report does something this cherry-picked cache of Palin letters purposefully fails to do: "Paint a picture" of an amateurish administration of grifters and thugs who, instead of running a state, was largely concerned with petty, personal vendettas.

Instead, what we're getting treated to is a Republican Party platter filled with Velveeta, a cultivated portrait of Palin that looks suspiciously identical to the image we were presented three years ago and again today, that of a "dedicated" and conscientious "leader" who expected "accountability" from all those around her and ran Alaska like a mother hen but one that always meant well.

Sort of the image we were given of pre-Katrina Bush months after Katrina struck.
0 comments