Brilliant Recent Posts
News You Can Use
The Scarlet Letters
Caturday
Dickless
Next up: Scarlet Letters
And it will be because we were too busy laughing a...
Balls to the Wall
David Vitter, patronizer of prostitutes, is still ...
What part of this is so difficult for the punditoc...
Why do the media take these poeple seriously? 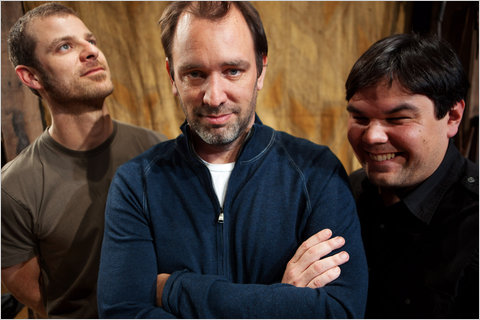 The Future of Broadway
There's a very strange thing happening in pop culture these days, and it has to do with show tunes.

Show Tunes. The very phrase has been associated with, variously, little old ladies with blue hair, tourists from Kansas, and Teh Gay. And yet, we're now finding that there is a Vast Show Tune Underground, a club that surely meets in dark basements in bad parts of town, serving up bad liquor and requiring a password for enter. Its members are neither little old ladies with blue hair, nor tourists from Kansas, nor gay men. In fact, they are some of the most unlikely people you'd ever think would be aficionados of the Songbook of the American Theatre. For one thing, they're straight guys. For another, they're "guy-guys", with sophomoric, Apatowan senses of humor which lean towards jokes about getting high and jerking off, about farts and anal probes and the reality that "clitoris" is a funny-sounding word. And yeah, there's a fair amount of undercurrent of homophobia to what they do, which is why they are as rich as Croesus and is no doubt their way of overcompensating for the fact that these guys really, really love show tunes.

Seth MacFarlane, who created Family Guy, a show that uses any excuse to include a musical number (preferably a big production number), has often revealed in interviews his love of show tunes and the American songbook. The CD Family Guy Live in Vegas, a collaboration with composer Walter Murphy, gave a taste of what MacFarlane's amazing pipes can do. But MacFarlane takes his American songbook as seriously as Michael Feinstein does, and in September will release Music Is Better Than Words, a compilation of "hidden gems" from musicals of the 1940's and 1950's. But because Mac Farlane's Broadway sensiblity is so tied up in his own voice, and because he's busy producing three hit TV shows and doing live performances, a move to Broadway is unlikely. Still, given the demographic of his audience, a guy with the snark cred of Seth MacFarlane can do a great deal to open the eyes of the youth demographic to the emerging Broadway that is not just for bluehairs anymore.

The bluehairs are the reason for the hue and cry over the years about the impending Death of Broadway, about where the next generation of audiences is going to come from when everyone who could possibly stand to sit through Andrew Lloyd Webber bombasts has already seen them and started to die off. All the hoopla about Spider Man: Turn Off The Dark, at least before it became a national joke, was about keeping the same young audiences in the theatre that made Avenue Q a hit and a Tony Award winner in 2003-2004 -- one with staying power that is still playing off-Broadway.

The plethora of jukebox musicals that dot the theatre district like Starbucks these days aren't going to do it. The songs in these shows, such as Jersey Boys, Million Dollar Quartet, and Baby It's You, have no resonance for younger audiences. They're for the neo-bluehairs that constitute the first wave of baby boomers. Perhaps this group has enough disposable income to keep Broadway going all by themselves, because there's yet another one coming: Natural Woman, based on the life and music of Carole King. It's all enough to make me rue the fact that Leader Of The Pack opened in 1984, before the jukebox musical became a cheap way to make money. Frank Rich hated it, but I actually SAW Leader Of The Pack and was rewarded by some great belting by Annie Golden and a rendition of "River Deep Mountain High" by the great Darlene Love that turned the Ambassador Theatre into the First Church of Awesome Gospel. "Leader" ran for only 120 performances, which should give the producers of Natural Woman pause, Jersey Boys notwithstanding. The jukebox musical set is starting to retire, and doesn't have a whole lot of money for Broadway. There's only so many ways you can slice that bologna before it starts to go bad. At some point you have to bring in new audiences.

It shouldn't have come as a surprise that snark sells. Yes, musicals like South Pacific are classics, but among the high school drama club set from whence new audiences come, the standard bearer is the ubiquitous Guys and Dolls -- to this day the gold standard of marriage of wit and music. The wit is out there; the question was from whence the music would come.

And it's coming from some highly unlikely places.

Anyone who's followed Green Day over the years knows that even back in the Dookie days, it was clear that while Billie Joe Armstrong may have been a snotty punk pothead, he had a gift for ditties -- 3 minute pop songs filled with angst, rage, and yes, snark. We knew that Billie Joe was prolific, and we knew that his brand of 3-chord punk had those damnedly catchy pop hooks that left "Walking Contradiction" playing over and over in your head for three days. What we didn't know, is for all these years, what Billie Joe was writing was show tunes. What we learned when American Idiot hit Broadway was just how glorious some of those songs are when performed by people who can actually sing.

...and by the original Broadway cast:

American Idiot on Broadway was a vibrant, exciting show with a great cast, hampered by a weak book, but it still played a respectable 422 performances, closing this year on April 24. And now we know that while Billie Joe Armstrong became a rock star writing songs about getting teenaged rage, there's something else brewing there -- a knowledge and feel for the conventions of theatre that in the aftermath of American Idiot have no doubt had him thinking he might at some point write something specifically for Broadway.

Sort of like what Trey Parker and Matt Stone have done with The Book of Mormon. Back in February, I started receiving postcards for bargain preview seats for this show. I knew that these two guys combined with Bobby Lopez, who along with Jeff Marx wrote the hilarious, yet still tinkly songs for Avenue Q, would produce a winner. But Mr. Brilliant had been jettisoned from his employer a month before, and I couldn't justify spending even $49 a head for a show.

Of course now I'm kicking myself, now that Book has become a monster hit, and is expected to pick up a wheelbarrow of Tony Awards this weekend. Who would have thought that the same people who fifteen years ago created a cartoon that started with a foul-mouthed character getting anally probed by space aliens via an expanding satellite dish would become the Toast of Broadway? But even if you can't get tickets until sometime in 2016 (which is what seems to be the case; just try looking for tickets during the time period that Telecharge allow you to enter and if you want to really get sick, try looking for tickets at StubHub), you should run out and buy the original cats recording.

Here's composer Bobby Lopez on this week's Studio 360 on NPR (full interview link) playing the opening to "I Believe", which I've read will be the song performed on the awards show tonight. It wouldn't have been my choice, but this song is a small miracle -- it demonstrates the full goofiness of some of the Mormon precepts, and yet for one brief moment, it makes you believe them too.

Parker and Stone may be getting all the press, but for my money, it's Bobby Lopez, likely to be two-for-two by the end of this weekend, who is the unsung hero of this production -- a Frank Loesser for a new generation.

D. said...
I saw Leader of the Pack as part of the college's half-price tickets for students theater program. And yes, Annie Golden! and Darlene Love! (The book was meh when not silly.)

Anonymous said...
I have never been a Green Day fan, but I did as you asked and listened to the Green Day version and the show version. By the time all the singers were singing in the second one, I had goose bumps all over my body! Thanks!

The New York Crank said...
Pardon me for being a Philistine, but what is "Apatowan?" and if it relates to Judd Apatow, who the hell is he again?

Andeesings said...
Anyone who saw "The Southpark Movie: Bigger, Longer, and Uncut" knew that "The Book of Mormon" would be great, and a HUGE hit.

"The Southpark Movie" was one of the BEST musicals written in the past twenty years. A sendup of the form, the whole thing was basically a loveletter to Broadway musicals. I'm thrilled that Parker and Stone have decided to write musicals. I hope Seth Macfarlane follows suit.
6/14/11, 1:13 PM
Post a Comment
<< Home
Contact
Home
Email:
brilliantatbreakfast at gmail dot com
RSS