Brilliant Recent Posts
Saturday music blogging, or Note To Young America
Let's look at what this is really about, shall we?
B37, 42 and 44
From Trayvon to Sharlene
Hey, George Zimmerman!
Dear Martin Family: I'm Sorry White People Are Su...
A Very Good Cat.
Time to start sending used tampons to the government
They want it all...and they want it now
Shorter Jim DeMint: Wimmenfolk don' know nuthin' ... 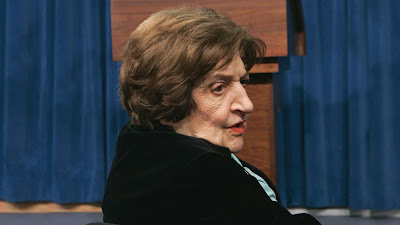 thanks for your kind words;  think Bush was afraid I would attack in a final question; probably would have.  He is leaving two unnecessary wars, an economy in the tank and a nation shamed for abuse of prisoners-helent - Helen Thomas to the author, January 14, 2009

Helen Thomas could be a sweetheart, provided you weren't the Leader of the Free World or one of the endless dozens of human countermeasures (aka press secretaries) sent out as sacrificial lambs to where Helen Thomas sat in the front row of the White House briefing room. She was a classic case of a nice lady who never should have smiled. Countless image safaris on Google show Thomas baring that hideous rictus that seemed tailor-made to scare small children and disingenuous press secretaries that served only to warn those who were about to lie would not be saluted by the Lebanese-American journalist from Kentucky.
Helen Thomas passed away early this morning at 92 and, it could be said, with the sudden and suspiciously violent manner of Michael Hastings' death, America this summer lost its last two true, honest mainstream journalists. Seven years ago today, Democracy Now discussed former Fox alumnus Tony Snow essentially calling Helen Thomas an agent of Hezbollah on July 18th. It was a new low even for an administration that had gone through four press secretaries, each, it seemed, more partisan and vitriolic than the last.
And it goes without saying Thomas' half century in White House journalism placed her in the right place at the right time, allowing to her to not only witness but report and comment on the most earthshaking events of the century: The Bay of Pigs, Cuban Missile Crisis, Civil rights, Vietnam, the first manned lunar landing 44 years ago today, Watergate, Iran Contra, 9/11, the invasions of Afghanistan and Iraq. The list goes on.
Not long before her forced departure from the Hearst Syndicate and mainstream journalism in general for politically incorrect but still correct remarks about the terrorist state of Israel, Thomas wrote a book I was asked by her publisher to review. It was entitled Watchdogs of Democracy, the title an almost perfect epitaph for her own career that terrorized administrations from Kennedy to Bush II (whom she'd called "the worst president in all of American history.").
Thomas had the level of longterm access most journalists only dream about while wistfully sighing at their I.F. Stone posters. While others in print and television journalism could claim the same level of access, none could match Thomas' durability nor her independence of thought. And Helen Thomas not only never forgot where she was in her enviable front and center position in the WH briefing room, she never forgot why she was there. As with her contentious exchange with Tony Snow, possibly the worst and most partisan press secretary in American history, over the senseless slaughter orchestrated by Israel that summer in Gaza, many of Thomas' give and take sessions with press secretaries and presidents alike often threatened to turn into policy debates.
And the doyenne of American journalism also never forgot the role of her profession and if you're still wondering what that is, I refer you again to the title of her best book. Unlike almost all her peers, she never shied away from the liberal identity yet she never let her political sensibilities color and taint her reportage of the events of the day. She was no Hunter S. Thompson but the lady had what Hemingway once called "a built-in, shockproof bullshit detector" when she sensed one administration or another was being disingenuous with her (which is always).
Thomas didn't believe in access for its own sake nor did she parley her career and reputation into an opportunistic book career, like Bob Woodward, who commonly sits on facts for years on end until ready to release them in his next bestseller. She'd conducted her career with an almost blithe disregard for the consequences. In an especially infamous exchange with George W. Bush, Thomas said,
"(Y)our decision to invade Iraq has caused the deaths of thousands of Americans and Iraqis... and every justification for the attack proved false. Why did you really want to go to war?"
Bush: "Blah blah blah."
Thomas: "They didn't do anything to you, or to our country."

Bush: "Excuse me for a second. They did. The Taliban provided safe haven for al-Qaida. That's where al-Qaida trained."
Thomas: "I'm talking about Iraq."
The only thing that toppled Thomas from the top of the heap was in not only committing the cardinal sin of becoming the story but also in running afoul of the 11th Commandment in the postwar United States: "Thou Shalt Not Criticize Israel." When questioned by a partisan rabbi looking for a Gotcha moment, he got it when Thomas said that "Israel should get the hell out of Palestine" and go home to Germany, Poland or the United States.
Before the old girl knew it, she was on the ash heap of a history for which she'd written better than a first draft. Toward the end of her life, she was writing for a free newspaper with a circulation of 25,000, print journalism's answer to post-ESPN/post-Fox/post-MSNBC/post-Current TV's Keith Olbermann. In the epigraph above, Helen Thomas had graciously responded to my question of how she'd felt about being snubbed by Bush at his last presser and she made no bones about the fact that Bush was wary of her. The lady deserved all the respect in the world but, if disrespect is the surest sign from Big Government that you're doing your job, she deserved that even more.
And if there's a heaven, I'd like to think Hunter S. Thompson, Molly Ivins and Michael Hastings have made sure to reserve space for Helen at God's next press conference, where we can rest assured she will put the Supreme Deity's feet to the fire by asking questions such as, "Seriously? 40 days and 40 nights of rain over a small city that indulged in sin that never hurt us?"
2 comments

Syrbal/Labrys said...
Thanks for the memories. I am getting so sick of the knee jerk "But she hated Jews" bullcrap being heaped atop the flowers on her casket.

e.a.f. said...
why anyone would be offended by her comment regarding going home to Germany, Poland, or the U.S.A. is beyond me. It is actually funny. And somewhat true. Many of the "fanatics" in Israel come from other countries.

Oh, and please don't put me down as one of those anti israel, etc. persons. My grandfather was the only survivor of his family. The rest died in concentration camps.
7/22/13, 10:43 PM
Post a Comment
<< Home
Contact
Home
Email:
brilliantatbreakfast at gmail dot com
RSS