Brilliant Recent Posts
Doubting Thomas
Saturday music blogging, or Note To Young America
Let's look at what this is really about, shall we?
B37, 42 and 44
From Trayvon to Sharlene
Hey, George Zimmerman!
Dear Martin Family: I'm Sorry White People Are Su...
A Very Good Cat.
Time to start sending used tampons to the government
They want it all...and they want it now


Truth is Stranger Than Fiction
Posted by jurassicpork | 3:36 PM 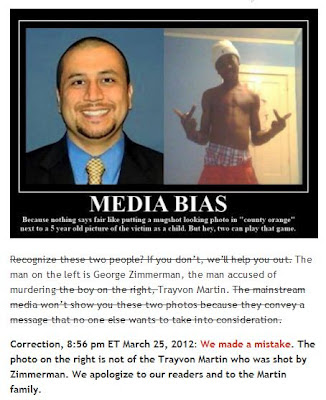 (By American Zen's Mike Flannigan, on loan from Ari.)
"These assholes they always get away." - George Zimmerman, moments before murdering Trayvon Martin and getting away with it.
(Original image discourtesy of Twitchy.com)
As a reader of fiction and a movie buff, I've long been cognizant of the basic rule that, if a character kills an innocent person, especially a child, they forfeit any claims to sympathy. In fiction, television and in the movies, if they kill an innocent person, the moral code dictates that antagonist will get it in the end, either by getting killed or arrested to stand trial. True, there are exceptions, such as Hannibal Lecter. But while Lecter may be admired, envied, even, for his brilliance, he can never be loved or elicit any serious sympathy. He'd crossed that line long ago and had forfeited any claim to sympathy.
This moral code in fiction has served writers and their audiences alike in good stead for longer than any of us can recall. To violate it is to violate the natural order of things and this code has as little chance of being repealed as ObamaCare.
Real life, however, is never restricted so universally by such a strict moral code. Real life, with its endemic gray areas, is much messier and bizarre than the cleanly edited fiction we read and see on the big and small screens. The Zimmerman trial and verdict is a case in point. And my point is not that the bad guy committed a murder of an innocent child and got away with it. My point is that the same people who are prepared to withhold sympathy for a fictional character doing the same thing have not only excused Zimmerman for doing what he did, they've conspicuously gone overboard and allowed their misguided sympathies to balloon into antebellum-class racism.
When we see a terrorist blowing up a market in a movie or a serial child killer taking young innocent lives, I'd like to think none of us would stop to consider if perhaps the victims, however young, had it coming to them, if perhaps there was some twisted rationale but a rationale nonetheless that they'd brought it on themselves. So why are so many racists in this world prepared to do the same when the real thing happens?
Less than a year and a half ago, professional trog John Derbyshire was fired from the National Review when he'd published an article on Takimag.com saying he'd warned his children about black people. However, 15 months later (just yesterday), Victor Davis Hanson, another passive but noted racist, wrote pretty much the same article in the very pages of the National Review. It's the typical rodeo clownery we've come to expect from the right wing since the Trayvon Martin shooting, with Hanson's assertion being that urban black males are much likelier to kill each other than being killed by police or white civilians.
However, the National Review isn't Stormfront. The NR is the magazine uneasy conservatives choose to read when they feel like fancying themselves intellectuals on a par with liberals, although any real intellectualism or even a serious pretense to it evaporated from the National Review with founder William F. Buckley's last puff of pipe smoke. And Victor Davis Hanson's article will be read by those with intellectual pretensions and will perhaps even take his advice and go home to have "the other talk" with their invariably white children. And the article will stand with as much impunity as its author.
The long-simmering racism we're now seeing after the Martin shooting and Zimmerman verdict began bubbling like the witch's cauldron in Macbeth back in early 2007 when Barack Obama threw his hat in the ring in Springfield, IL. Conservatives (hereafter referred to as "the racists") were curiously silent about the Martin shooting until a black man who happens to be the President had briefly mentioned it before fading back into the shadows to let the Florida criminal justice system, or the vaudeville act it actually is, do its job.
Suddenly, alleged support for Zimmerman that was in reality racist backlash over the President daring to speak out of turn began spewing into the mainstream media and accepted as legitimate commentary and a legitimate part of the narrative. And the same theatergoers, television viewers and readers who have been trained and conditioned to withhold sympathy from a fictional child murderer now not only rallied around Zimmerman's pudgy body but actually found endless ways to blame Trayvon Martin for his own murder, a cruelly twisted point of view that found its apex in the Zimmerman verdict.
"But, but black people also kill the black people we really don't care about!" 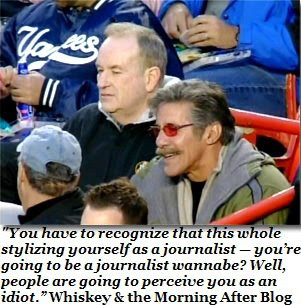 Geraldo went on Fox and crowed about how right he was about Trayvon and his hoodie and how he brought his own death on himself for daring to wear it over his head while walking through a predominantly white neighborhood on a rainy night.
Noted overt racist Rush Limbaugh made himself an honorary black person by declaring that saying "nigga" was cool again and that he could use it like people in da hood.
The riots that were anticipated by Fox "News" and Juror B37 turned out to be peaceful demonstrations that would make your grandmother's book club meetings look like the Rodney King riots of 1992 (While Fox, in its article, never once owned up to feeding that narrative). So conservative commentators were forced to cherry pick examples of black people killing each other and the President's adopted home town of Chicago was, not coincidentally, chosen for examples.
Then the President was impertinent enough to mention the verdict, without once criticizing it and even urging us to accept the jury's verdict, and that's when the racist right wing went totally antebellum. Because, you know, black people should be seen and not heard.
One of the best things about living in our latter day society is that that we've grown so intolerant of racism (as well as misogynism and homophobia) that anyone whose name isn't Rush Limbaugh can pretty much kiss their jobs goodbye if they use the "N" word and if you don't believe me, ask Paula Deen about that (especially as she now has a lot of spare time since she lost a few of her restaurants, book deals and commercial endorsements this very summer). In fact, media outlets both big and small cannot, to this day, even bring themselves to spell out the word (It's N-i-g-g-e-r or, if you're an allegedly hip, white, racist radio pundit out of Florida, N-i-g-g-a).
And yet, despite this pretense to intolerance to any form of racism, Limbaugh gets to keep his job at Clear Channel. Hanson gets to keep his writing gig at the National Review. Mark Fuhrman gets to keep his job at Fox "News". And we're supposed to quietly sit back and listen to other racists spew their racist venom at Trayvon Martin and his family lest we be accused of oppressing their first amendment rights.
What happened to Trayvon Martin was not new. Neither was the reason. He was an innocent boy coming back from a 7-11 after buying candy and was profiled by an overzealous vigilante with 911 on his speed dialer. And the kid died for opposing a white "authority" figure and for, well, standing his ground. We hear about instances such as this countless times in the news involving other murdered civilians and cops and we hear the usual accusations and counter accusations of the dead victims "resisting arrest" and otherwise being blamed for their own murders. It just took Zimmerman a little longer to have his non-guilt established than an actual guy with a badge and a gun.
What was never conclusively established was whether Zimmerman eliminated a deadly threat from that almost exclusively white gated community. What apparently was deemed non-germane was that if Zimmerman had simply stayed home or had been much less zealous in his very unofficial duties as a wannabe cop, the evening would've passed into peaceful obscurity.
Instead, what has filtered into the narrative is the racial profiling of a President in a unique enough position to claim being racially profiled himself and being shouted down by people who have long since been driven insane with racist loathing of a black man sitting in the Oval Office by dint of popular mandate.
1 comments

Robert L Bell said...
What a shame that president Stein has not been informed. She could wave her bully pulpit and fix the situation in a trice.
7/29/13, 12:04 AM
Post a Comment
<< Home
Contact
Home
Email:
brilliantatbreakfast at gmail dot com
RSS