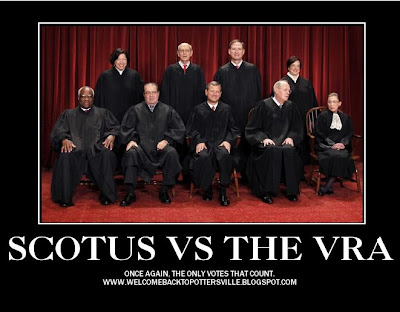 It's been a helluva week on the political front and it's only Hump Day. Let's see what's going on in the Land of the Free, Home of the Brave.
First off, Gabriel Gomez, aka Lurch, got his uptight ass handed back to him by losing to Rep. Ed Markey in the Massachusetts special Senate election. Apparently, not as many white Independent male voters went for him as expected. Maybe it was the fact he called Ed Markey "pond scum" over something he didn't do (compare him to bin Laden) or maybe it was the fact his termagant of a wife decided to pile on Markey like a half-crazed harpy with her clit caught in a razor wire fence. In his concession speech last night, Gomez Addams said that, before the election, he was hardly known outside of Cohasset. "Look at where we are, now."
Yeah, a loser giving a concession speech before fading back into obscurity, that's where.
The same day Markey voters were going to the polls to ensure he'd win by 10 points, the SCOTUS ruled that Jim Crow laws were cool with them again by pulling out the lynchpin of the VRA, Section 4. That's the pesky little section that requires 16 Jim Crow states to check with the Justice Department before trying to purge brown people who reliably vote Democratic.
In the majority opinion, Fat Tony Scalia essentially said, "Jim Crow? Who is this Jim Crow of which you speak, stranger?" Apparently, Fat Tony was able to say with a straight face that southern states with an undeniable history of racism have gotten past all that and that purges and the like were an "eradicated" practice.
You know, like in Florida last year when Rick Scott's own Secretary of State tried to break Katherine Harris's record by purging 180,000 brown people from Florida's voter rolls before Section 4 of the VRA stopped him from doing that. Or how about when Arizona tried to pass a fascist law that would've required Latino voters to show proof of citizenship at the polls? You know, the same law the Supreme Court struck down as unconstitutional just last week.
And don't even get me fucking started on how states such as South Dakota and New Mexico have been doing everything in their power to keep Native Americans from voting, a right they've allegedly had since 1924 and the Justice Department essentially allowing South Dakota and other states to flout Federal law even as right wingers are still screaming about a swiftly defunded ACORN that doesn't even exist, anymore.
Yeah, Tony. Stuff like that and reducing the number of polling places and ballot boxes and voting machines in heavily-minority districts and ending early voting and producing long lines of people of color waiting sometimes as long as 8-10 hours to vote. Yeah, let's give those poor redneck southern states a break, since they've moved wa-a-a-ay beyond racial discrimination, as Barack Obama's presidency has so ably proven.
In light of yesterday's racist ruling, all that was needed was Clarence Thomas, the self-loathing Federalist Society stooge who'd actually called Section 4 of the VRA akin to Jim Crow laws, muttering, "While we're at it, let's do away with Loving vs Virginia, because I don't think I deserve to be married to a white woman."
The news isn't all bad from ALEC's judicial arm: Just hours ago the SCOTUS also ruled that DOMA was unconstitutional although, as usual, Scalia and Roberts were of the unpopular opinion. Fat Tony, the one who told us eight years ago that we should engage in more sex orgies, plainly showed in his minority dissent that he was speaking from pure, homophobic ideology and not any observance of the law.
And I think it's only fair that I bring up a rather inconvenient fact to any so-called liberal, LGBT Obamabots in attendance that your hero and his DOJ just a few years ago upheld the constitutionality of Clinton's Defense of Marriage Act when Eric "The US Government is Too Small to Succeed Against Too Big to Fail Banks" Holder, in the DOJ's brief, likened gay marriage to incest and bestiality, a brief that, the very next day, your hero Barry supported.
I know that's inconvenient but that's what I'm here for, to bring up the shit you'd rather not remember about your clay-footed heroes.
They may not rule on CA's Prop H8 until tomorrow but in ruling in favor of DOMA's unconstitutionality, they also left the door ajar for gay marriage to come back to California
TX state senator Wendy Davis's filibuster failed today when the Lt. Governor and the Senate GOP chairman decided that Davis violated state senate rules by not staying on topic, since she was talking about abortion to block passage of Texas' sweeping abortion bill that would rule out almost all reasons for having an abortion. It's essentially Texas invoking the "Shut up and sit down, woman!" rule.
So, Davis' heroic filibuster failed but you know what else failed? The abortion bill, since they couldn't vote on it.
2 comments

Poli said...
Please stop insulting the readers whose only join was literally Obama or Romney.

You can harp about voting third party all you want, but the simple fact of the matter is that any vote toward Jill Stein (especially those in battleground states) was essentially a vote for Romney because she wasn't going to win and it wasn't conservatives who were going to throw a vote that way.

And since the point of Wendy Davis' filibuster was to prevent the state senate from voting on it, she fucking succeeded - so don't act like she failed. She was a hero the other night, and it is insulting to her and the many who stayed at the capitol until early morning hours to shit on her achievement.

I've been reading this blog for years, and plan to stick with it, but all you seem to be doing during Jill's much-needed break is insulting those of us who have stuck through - and making it harder to want to go read this blog.
6/27/13, 10:38 AM

Anonymous said...
'...his termagant of a wife decided to pile on Markey like a half-crazed harpy with her clit caught in a razor wire fence.' This is probably the lowest in your un-funny, messsed up screeds I've read, and like Poli, I've hung in with Jill for years. She kicks ass. You don't. Stop. WenG
7/1/13, 10:10 AM
Post a Comment
<< Home
Contact
Home
Email:
brilliantatbreakfast at gmail dot com
RSS