Brilliant Recent Posts
Here's something I missed
Just checking in....
Malala Yousufzai
Planet Moron
Any Way the Wind Blows
I was so angry today
Sound Minus the Fury
People Want To Sing Along
An open letter to the unemployed seeking good jobs
It's still about the dog


The Cheshire Cat's Sodomization of Goober and Other Tales of Republican Woe
Posted by jurassicpork | 11:00 AM 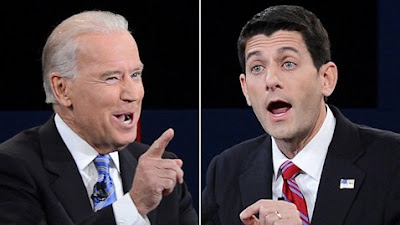 The late, great Hunter S. Thompson once described Vice President Joe Biden as "a rabid weasel on speed." At several times during last night's debate in Mitch McConnell land (henceforth referred to as the place where "No!" went to thrive), the good gonzo journalist arose literally from his own ashes and reminded us why his wisdom and spot-on caricatures are still so relevant and necessary.

Hosted by ABC's Martha Raddatz, the woman to whom Dick Cheney once said, "So?" when she'd told him 2/3's of the American people thought invading Iraq was no longer worth it, the debate essentially came down to the same strategy that the presidential debate in Denver came down to: The Republican lying and the Democrat sticking to the facts. Here's the difference:

And, typically, the mainstream media that's never capable of recognizing a landslide and a doomed campaign when it sees it, is playing up the debate as if it was an evenly-matched battle of two stupendously accomplished and pragmatic men each advancing a legitimate-sounding strategy for getting our great nation back on track.

That's only possible, of course, if the American public at large went into last night's debate without knowing the relevant and salient facts and completely and utterly incapable of distinguishing truth from the threadbare fictions that have been the hallmarks of the Romney campaign from the start.

A classic example was Paul Ryan sticking to Romney's long-discredited meme of the Obama administration taking $716 billion from Medicare's coverage, which the president, Vice President and many other experts who've actually read the White House proposal has proven to be a bald-faced lie and doesn't even deserve to be discussed on the stage. The $716 billion in savings is not a subtraction of coverage that the Republican ticket is audaciously pretending to care about while proposing the eradication of Medicare but a measure intended to stop waste and fraud in a system with a 3% operating cost.

If anything, Joe Biden, legendary body-puncher and infighter, proved that the Gish Gallop is not the infallible offensive technique as hitherto believed after the first presidential debate. The Gish Gallop is essentially when one party in a debate spews out so many falsehoods that the opponent is incapable of refuting these lies within the time frame of the debate and one is left with no time to advance their own argument. Romney made it look like an invincible strategy because the president was clearly off his game on October 3rd.

Biden came into last night's debate looking very much like HST's rabid weasel on speed, as if he'd prepared for the debate by doing the intellectual version of Ryan's workout regimen. If anything, Biden has gotten better as a debater since the lackluster Sarah Palin matchup four years ago. Since it was the first, last and only Vice Presidential debate, the 90 minutes had to be divided up between domestic and foreign policy issues. Obviously, not every important topic could be brought up during the hour and a half. Not a word was breathed about gun control, gay rights and women's rights and abortion was given relatively little attention.

But whatever Ryan talked about he lied about. From calling Medicare and Social Security entitlement programs that needed reform before they surely go bankrupt to calling Mitt "Let Detroit Go Bankrupt" Romney "a car guy" to claiming his faith would not play a part in his political agenda to outright saying Mitt Romney was more bipartisan than the president, Ryan couldn't even tell the truth about his title. With a Congressional approval rating of 11%, it was no wonder Ryan insisted on not being called "Congressman".

Biden smiled, smirked and outright laughed at Ryan, seemingly incapable of believing that he was actually sharing the same stage with a guy who said his family was on the same Medicare that Ryan essentially wants to replace with a glorified coupon program for those of us whose sons haven't accumulated a large fortune by sucking up to the 1% in Congress. It was like the political version of watching Goober Pyle getting cheerfully sodomized by the Cheshire Cat.

But just because Biden energetically swatted away Ryan's nonstop avalanche of lies with superior political gamesmanship doesn't mean the Obama-Biden ticket has all the answers, either. The fact remains that little has changed on Main Street since Obama took over nearly four years ago. It's an inescapable fact that Wall Street has profited handsomely off the initiatives and agendas of the Obama administration while over 12 million Americans are still struggling to find work. Populist rhetoric then and now about billionaires needing to pay more taxes still falls far short of actual reality and this is largely because of Republicans holding the expiration of middle class tax cuts hostage until they get another round of cuts for their 1% employers on Wall Street. It's like the hostage crisis over unemployment benefits two years ago, only a different victim.

But Bill Clinton also faced a hostile Congress in six of the eight years he ran the executive branch plus was facing what would've been for anyone else a career-ending sex scandal from 1998 on and still left office with $230,000,000,000 in the bank that the Bush administration then detonated like frat boys lighting their own farts in their parents' darkened basement. Over the last three and a half plus years, Obama has been treated by the GOP like an overworked janitor brought in to clean up the crash of the Hindenburg and cursed for not doing the job in record time.

Both candidates piously expressed concern for a middle class that Mitt Romney largely had written off as moochers during a $50,000 a plate fundraiser. But we'd do well to remember that Barack Obama had done much the same thing at a $30,000 a plate shingdig of his own at the gated Connecticut mansion of a man named Rich Richman. The middle class, and the poor below them, find themselves in the same position every two, four or six years: Treated like a well-worn rawhide chew protected by an old dog that's no longer interested in it. And, as always, the American poor and middle class are left with the choice of the same old two monolithic parties, a choice that pathetically involves choosing the men who tell the least number of lies and half truths.
2 comments

jurassicpork said...
I hate to go off topic on my own thread but... to anyone in a position to do so, please help keep Mr. Potter from George Bailey this November 1st. This is fixing to be the scariest Halloween ever.
10/13/12, 9:51 AM
Post a Comment
<< Home
Contact
Home
Email:
brilliantatbreakfast at gmail dot com
RSS