Brilliant Recent Posts
Chickenhawks
Pic o' the Day
In case you missed this
Around the blogroll and elsewhere: Is it really l...
Top Ten Reasons Not to Vote For Mitt Romney
September 11th Redux
What I miss most is time
Forget what the Republicans tell you...the truth i...
Déjà vu all over again
Let all the poisons that lurk in the mud hatch out


Diplomacy is Not an Option
Posted by jurassicpork | 11:45 AM 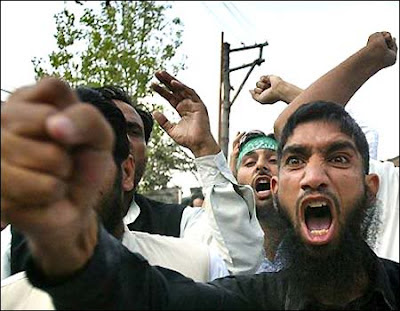 (A Brilliant at Breakfast exclusive)

Maybe it's my emotional/mental fatigue from everything I've gone through in my personal life over the last three or four years, maybe it's just middle age setting in, or maybe I just don't give a damn, anymore, because every day makes me increasingly believe the smart money would be on the human race not surviving the year.

So when I see these Muslim riots in (at last count) 30 different countries, I have to sadly shake my head at all the divisive hate in this world. And, despite all the screaming, there are still ongoing failures in communication. Let's start with the mainstream media:

The one narrative that's missing from the corporate MSM are the exact reasons why the Muslims are rioting and going after American embassies and consulates. It insults me to no end the MSM think we are so dumb as to believe their official narrative that the (what are now global) riots are solely because of a badly-produced, badly-acted and badly-written Youtube movie by some right wing operatives.

Once again, it's up to bloggers who are beholden to no corporate interests to drive home the point that the movie, at best, was merely the flashpoint that made this massive, simmering cauldron of anti-American hatred bubble over, making the similarly misinterpreted Arab Spring of last year look like a tempest in a teapot by comparison.

Have any MSM outlets sent boots on the ground to talk to the Muslim boots on the ground and get a cross-section of opinion as to why precisely they're rioting? It's painfully obvious to even a clueless old boob like John McCain that the rocket attack in Benghazi was a terrorist cell at work in Libya and, whether or not by design, the mob violence that clustered around it over the video perfectly masked the actions of the terrorist cell that claimed four American lives, including Christopher Stevens, our ambassador to Libya.

This narrative, thoughtfully provided and maintained by the "liberal" mainstream media, only enables the Obama administration to establish some disingenuous plausible deniability so they can say, "We didn't make the movie."

I think the Muslim world realizes that. Despite "Sam Bacile's" assertion that he was an American Jew who'd gotten "Innocence of Muslims" financed to the tune of $5,000,000 by 100 other Jews, no Israeli embassies are under attack. We're not getting reports of Jews being slaughtered by Muslim factions on the streets of Tel Aviv.

No, they're going after us because, whatever your criticisms regarding the state of Israel (and one has to make this one crucial distinction), Israel does not invade Middle eastern, Arab and Muslim countries to impose "regime change" for the sake of oil.

That's why they have proxies such as the United States.

Our nation, funded by our tax dollars, routinely invades oil-producing countries (It was revealed years ago that Afghanistan has been found to have billions of barrels of oil underground as well as a trillion dollars in undeveloped minerals. Ergo, if you're wondering about the real reason why Obama ramped up Afghanistan and made a deal with Afghani authorities to stay there until 2024, there's your starting point. As Mark Felt, aka "Deep Throat" said, "Follow the money.").

It's not Israel that's slaughtering countless hundreds, if not thousands, with cowardly, unmanned drone strikes and upping the terrorist death toll and lowering the collateral damage totals by designating any male 15 and up as a potential terrorist.

It's not Israel that's been infamous for corporate colonialism at the expense of the rights and in many cases the lives of the indigenous people. And since the end of WW II, America is far more guilty for its failed attempts at "nation building" after regime changes such as what we saw in Iraq. The Arab Spring, misinterpreted as it was, showed the planet that the Muslim world is perfectly capable of imposing regime change on its own without American military and corporate adventurism and colonialism.

That was the whole idea, people. 9/11 was mere prologue for what's to come. Consider American conduct in the Arab and Muslim worlds since 9/11, the invasion and occupation of Iraq, the invasion and neverending occupation of Afghanistan, hundreds of drone strikes in that country, Yemen, Pakistan and elsewhere. And so a few right wing chickenhawks can burnish their foreign policy credentials, add a few more inches on to their flaccid penises and, oh yeah, bloat a few dozen corporate CEOs and Chairmen in the military industrial complex.

So the Muslim fury that's being rained down on our pointy heads isn't misdirected. It's being directed with pinpoint precision and by attacking our consulates and embassies, they're saying, "Your diplomacy is not enough." Diplomacy wasn't even an option in the Bush administration because it had no use for it. And despite having the supremely talented Hilary Clinton as Secretary of State, the figurative olive branch is not an option for the Obama administration because it's been ripped out of our hands and broken over a knee.
2 comments

Bob said...
Not just Israel. We're the proxy military arm for the House ofSaud. We sell (or rather our military-corporate establishment sells) millions & millions of dollars of arms, jets, tanks, humvees, to the Saudis, who then play with their toys in the desert (the boys of the House of Saud get to play with the best toys) while we do the "regime change" shit for them.
9/18/12, 2:05 AM