Brilliant Recent Posts
Why the right should be pointed to and laughed at ...
First They Laugh at You...
Nice priorities, Mr. Holder (and you Democratic Se...
The General Excommunicated?
Another brilliant idea from the executive suite (not)
Let's All be Frank
I'm Thinking About the Subway
You're very welcome.
Around the Blogroll and Elsewhere: Back to the Sa...
Oh fer cryin' out loud.... 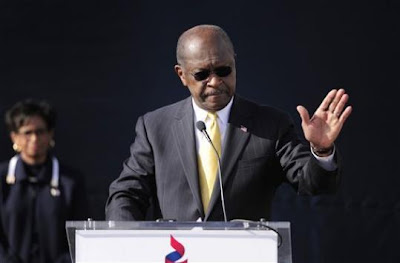 Yesterday, former pizza mogul Herman Cain announced at the opening of his new campaign headquarters in Atlanta that he was "suspending" his presidential campaign. Citing "prayer and soul-searching", the major reason is obviously the distraction from his campaign created by sexual harassment and adultery allegations. But there were other reasons Mr. Cain suspended his quixotic quest for the White House. What were they?