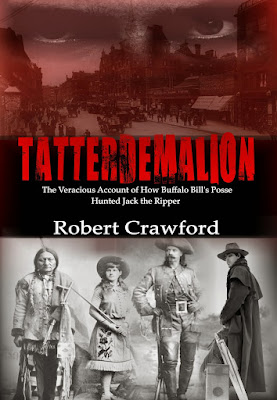 At the risk of this sounding like whining, there's nothing more disspiriting than spending upwards of two and a half years on a single book then seeing it sell less than two dozen copies, hardly any of them to strangers, over a period of six months despite my ruthlessly pimping it on social media. Add to that a troll who constantly chimes in with one star reviews on Amazon and skewing the rating because it can't seem to attract more than four legitimate reviews. Then add to that it being ignored and disrespected by virtually every single fiction-repping literary agency in the English-speaking world.
And Tatterdemalion, despite those dismal numbers and facts, is a success story even if only by dint of conspicuous relief. My previous four titles have sold in single digits even when I discounted the prices for the Kindle titles to as little as .99¢. And writers being the way they are on social media, they scream past each other and refuse to publicize anyone else's book while only paying services pimp their own.
It's a sad situation, that democratic self-publication also entails we become Fuller Brush salesmen and that the constant push for sales for apathetic twats who'd literally rather die than actually click on the retweet button leaves us little time for actually interacting with our disinterested followers.
But it is what it is. "The only true failure is giving up," say industry professionals sotto voce as they count what should be our money, considering we're the ones who make a publishing industry possible. So, in illustration of Einstein's definition of insanity, I'm plugging away on another pair of novels and hope they get me an agent and/or a publishing contract.
However, money's getting scarce and we're going to be losing our only income as of this April. And I'm getting tired of begging money of random strangers and online friends sick and tired of our constant financial problems. So I'm having an online book sale to try to get some revenue in this house the old fashioned way- by earning it.
And I think it would be a good idea to remind you of the previous titles I've self-published over the years and to put out the links from years past. 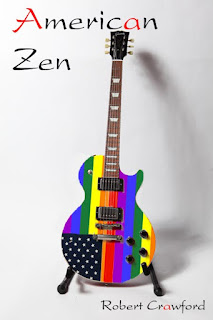 In the nearly three years since it's been out, American Zen (Kindle title), written by my alter ago Mike Flannigan, has attracted just five reviews and a handful of sales. But the average rating is five stars. It remains, IMHO, as my best sustained effort and is a must-read novel for anyone that enjoys politically-oriented fiction by a liberal with a wicked sense of humor. Here's a sample paragraph from the prologue:


"As with water, failure, tragedy and loss seek the path of least resistance. And it’s perhaps no coincidence that the words “trailer” and “failure” are almost perfect rhymes. In the American mind, the two are synonymous. That’s because we tend not to look beyond end results and aftermaths. We see trailer parks, tent cities, people living under bridges and think not “refugees” or “victims” but 'failure.' Assumptions are dangerous but those of us who are more fortunate can live with that kind of danger."

The Createspace paperback edition can be found here for $7.99, not a bad price for a 150,000 word epic taking place in the first days after Barack Obama was elected President.
The Toy Cop (Kindle) is an odd bird in that it took me the longest to write. While solidly within my usual thriller/suspense genre, I'd begun it in November 1998 before social media was even a reality (requiring some fast updates to reflect this reality). 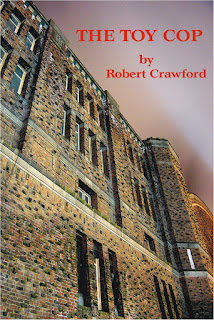 Next to Tatterdemalion, it's my longest novel at nearly 175,000 words. Here's the product description:


Four years ago 10 canisters of VX were stolen near the Dugway Proving Grounds, leading to the most disastrous hostage scenario in FBI history. Special Agent Michael Brodie, head of the elite FBI crisis negotiating corps, had lost his chance to get IRA terrorist Seamus Hannigan, the man who killed his FBI daughter, destroying Brodie ‘s credibility when he blew up himself and three others.
During a freak nor’easter in Eastbridge, Massachusetts four years later, former Navy Seal Jack Gallagher and three accomplices take a US Senator and 12 others hostage, holing them up in an armory. The 13 were to witness the federal execution of Edd Corn, the most notorious child killer in US history. Three years ago, Corn nearly killed Gallagher’s daughter Deirdre. Determined to mete out justice personally, he’s determined to end his life to that end while his ex wife, rookie patrol officer Penny Gallagher, helplessly watches outside.
Seeing she’s out of her depth, and remembering his slain FBI daughter Leighann, Brodie calls in every favor to get involved in the negotiations while trying to avoid the resistance put up by his skeptical superiors, Gallagher and Ray Cardoza, the first FBI agent onscene and his one-time future son in law.
Then Brodie hears Hannigan’s voice from the grave. Is the hostage scenario a mere coverup? Is Gallagher involved with the IRA plot to appropriate and use ten canisters of VX? Or has Jack unwittingly invited one of the world’s most lethal terrorists in his midst?

Since I'd begun reworking it earlier this year after finishing Tatterdemalion,  the paperback's been pulled from the market. But the Kindle version is available for just $4.99.
The Misanthrope's Manual (paperback) may seem like a departure for me but it isn't. Along with poetry, satire is one of my literary roots. I'd begun writing this more liberal version of Ambrose Bierce's Devil's Dictionary all during the 90's while I was still in my 30's. The Kindle version can be found here for just .99¢. Here's a sample:


Doom, n- The infinitely patient beneficiary of all human endeavor. 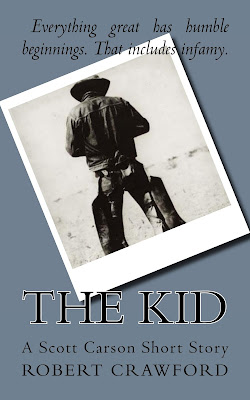 The Kid (paperback edition), you may remember, is a short story followup to Tatterdemalion, with Scott Carson telling the tale of his first adventure in 1873 when he was but a lad of six and a half. It's more than just a short story. Originally a promotion I was giving away free earlier in the year to anyone who bought the larger Carson story, The Kid (Kindle) also offers valuable context and background that goes a ways toward explaining Carson's character and one of the most important relationships in his life.
As expected, it's only sold a handful of copies and has not inspired even one person to write a review. If you buy it, please consider doing so so it'll have something approximating a rating.
Finally, there's Tatterdemalion (Kindle version), which, as previously stated, took me almost two and a half years to research, draft and revise. This has the distinction of having the best sales of my other titles (but only in a very relative sense) while being rejected and/or ignored by literally over 320 different literary agents. I have a major acquisitions editor at Penguin/Random House who'd requested the full ms a couple of months ago.
Originally weighing in at over 250,000 words, at a much trimmer and tighter 193,000, it's still the largest novel I've ever written. It was inspired by Caleb Carr's Alienist duology and is the next best thing, I think, to a third Alienist book. In many ways, I'm proudest of this literary achievement because it's the culmination of my lifelong ambition to write a truly epic historical thriller. Tatterdemalion can also be bought here in paperback. Don't let the $15.50 cover price scare you. Remember, it's nearly 200,000 words long and is a good, solid and, I think, very thrilling read.
If you actually buy any of these titles, again, please be considerate enough to write a review. It takes but a few minutes and makes all the difference to a struggling, self published novelist.
0 comments