We are privileged to be alive today
Posted by Jill | 8:57 PM 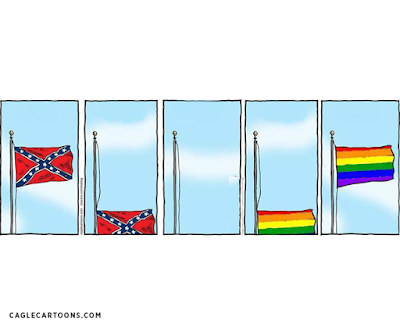 In our all-too-short lives, we are lucky if we have the privilege to be present for a moment in our history that shows us at our best. There aren't many of them, but today is one. Oh, there is ugliness, to be sure, and there will be more in the coming days. But today we get to enjoy an America where for hopefully more than one brief and shining moment, love is truly in the air.

I was too young to remember the signing of the Civil Rights Act.  Most of the Momentous Moments during my lifespan have been tragedies:  The Kennedy assassinations.  The murder of Dr. Martin Luther King, Jr.  Various indelible photographs from the Vietnam War.  The resignation of Richard M. Nixon.  9/11.  I can only recall three Momentous Moments in our nation during my life when I really felt, to quote Michelle Obama, proud of my country.  And Barack Hussein Obama was part of all three of them.  They are the day he was nominated by his party for the presidency, the day I woke up and this country had actually elected a black guy named Barack Hussein Obama, and today.

In fairness, there's another guy who was part of all three of them, and as tweeted by his wife, was running around today, just a few weeks after burying his son, wearing a rainbow flag like a cape and high-fiving everyone: 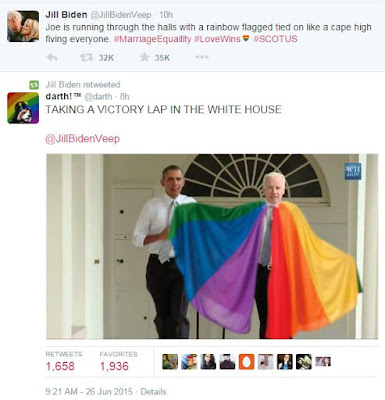 I mention Joe Biden because back in 2012, he threw down the gauntlet about gay marriage, which hastened Obama's own "evolution" on the subject, thus laying the groundwork for a united White House advocacy of civil rights for ALL Americans.  I'm not mentioning Biden to try to get a white guy into this, but let's give credit where it's due.

For six years, Barack Obama has been the Cautious president -- too willing to try to "reach across the aisle", to compromise with people who loathe his very existence, old Confederates and Christofascists for whom the idea of a black man living in the White House whips them into a rage.  And I'm just talking about Congress, never mind people like Dylann Roof, who apparently decided that a girl he liked deciding to date a black man meant he should start a race war, going into a church and killing nine people in cold blood who were guilty of nothing more than inviting him to pray with them.

In the last few weeks, we've seen the President Badass that many of us wished for for the last six years finally come out.  He's spoken eloquently about the human right to affordable health care, with which six members of the Supreme Court agreed yesterday.  He's spoken eloquently about the right to marry, with which five members of the Court agreed today.  And he capped off this incredible week with a eulogy for State Senator and Reverend Clementa Pinckney that was loving, admiring, respectful, but yes, also angry -- angry at a country that has people -- and politicians in a major party --  in it who still believe that people should be eliminated because of the color of their skin.  Angry at a country in which 150 years after the Civil War ended, vast swaths of the south (and some people who should know better) still don't see the Confederate flag as the symbol of bigotry and racism that is is.  Some still believe in the secessonist dream, of a world in which black people can be owned by white people and treated as chattel (or worse).  He couched this anger in terms of grace -- the grace that brought black and white together today in Charleston, South Carolina to mourn the loss of nine people who just wanted to worship together in praise of their deity by a young man who spent his adolescence awash in the wingnut noise machine that legitimized the hate that glowed inside him until it erupted because he thought he had the right to "own" a girl he liked because of white privilege.

We've known for years that Obama does some damn fine speechifyin'.  We've also know that his eloquence is often followed by disappointment, as he continues to try mightily to straddle the two worlds in which he has spent his life, as parts of this nation underwent a kind of collective emotional breakdown around him as a result of his election.  But not today.

It's been quite a week in this country -- one which began in mourning and ended in celebration.  It began in mourning for the nine people who followed in the footprints of the four young girls who died in September 1963 simply because they were black -- casualties of bigotry and small-mindedness.  It ended with an affirmation that the best part of us is the part that loves; that loves so deeply that we simply cannot imagine our lives without the other person who joins with us to form a unit called "us" that lives in conjunction with the units called "me" and "you".  It ended with an affirmation -- and a shot across the bow to the bigots and the closet cases who hide from themselves behind a cloak of religion -- that they no longer run things; that their days are numbered.  This is OUR time -- time for those of us who strive to embrace our better selves, not our worst.

I join with my LGBT brothers and sisters today -- with Gabriel and Dennis and Jay and  "S." and Billy and Maggie and Margot and Bob and Dominick and so many others -- to celebrate and to say "Mazel Tov!"

And to say thanks to America for electing Barack Hussein Obama, who appointed Justices named Kagan and Sotomayor to join with Ruth Bader Ginsberg and Stephen Breyer to confirm what should always have been obvious to everyone.  And to Justice Anthony Kennedy, who somehow managed to find his own better nature.

It is truly a wondrous day.  Some might call what we experienced today "grace."

We do not know whether the killer of Reverend Pinckney and eight others knew all of this history.  But he surely sensed the meaning of his violent act.  It was an act that drew on a long history of bombs and arson and shots fired at churches, not random, but as a means of control, a way to terrorize and oppress.  (Applause.)  An act that he imagined would incite fear and recrimination; violence and suspicion.  An act that he presumed would deepen divisions that trace back to our nation’s original sin.    Oh, but God works in mysterious ways.  (Applause.)  God has different ideas.  (Applause.)
He didn’t know he was being used by God.  (Applause.)  Blinded by hatred, the alleged killer could not see the grace surrounding Reverend Pinckney and that Bible study group -- the light of love that shone as they opened the church doors and invited a stranger to join in their prayer circle.  The alleged killer could have never anticipated the way the families of the fallen would respond when they saw him in court -- in the midst of unspeakable grief, with words of forgiveness.  He couldn’t imagine that.  (Applause.)
The alleged killer could not imagine how the city of Charleston, under the good and wise leadership of Mayor Riley -- (applause) -- how the state of South Carolina, how the United States of America would respond -- not merely with revulsion at his evil act, but with big-hearted generosity and, more importantly, with a thoughtful introspection and self-examination that we so rarely see in public life.
Blinded by hatred, he failed to comprehend what Reverend Pinckney so well understood -- the power of God’s grace.  (Applause.)
This whole week, I’ve been reflecting on this idea of grace. (Applause.)  The grace of the families who lost loved ones.  The grace that Reverend Pinckney would preach about in his sermons.  The grace described in one of my favorite hymnals -- the one we all know:  Amazing grace, how sweet the sound that saved a wretch like me.  (Applause.)  I once was lost, but now I’m found; was blind but now I see.  (Applause.)
According to the Christian tradition, grace is not earned.  Grace is not merited.  It’s not something we deserve.  Rather, grace is the free and benevolent favor of God -- (applause) -- as manifested in the salvation of sinners and the bestowal of blessings.  Grace.
As a nation, out of this terrible tragedy, God has visited grace upon us, for he has allowed us to see where we’ve been blind.  (Applause.)  He has given us the chance, where we’ve been lost, to find our best selves.  (Applause.)  We may not have earned it, this grace, with our rancor and complacency, and short-sightedness and fear of each other -- but we got it all the same.  He gave it to us anyway.  He’s once more given us grace.  But it is up to us now to make the most of it, to receive it with gratitude, and to prove ourselves worthy of this gift.

(This is why I still come by here, hoping to see a new post from you.)