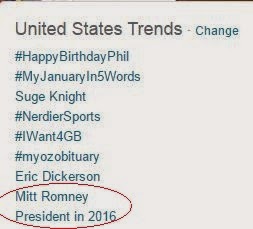 Perennial Republican contender Mitt Romney has recently decided that he will not seek the presidency for a third time in 2016. His reason, as he told potential investors supporters in a conference call was, "I’ve decided it is best to give other leaders in the [Republican] Party the opportunity to become our next nominee." Romney's departure from the field frees up a lot of cash and delegates while at the same time not supporting the heir apparent to the Republican nomination, Jeb Bush. But Mr. Romney told his supporters there were other reasons for withdrawing his name from consideration. What were they?

D. said...
Good one! I particularly liked the penultimate item about the voting machines and the bit about being unemployed.