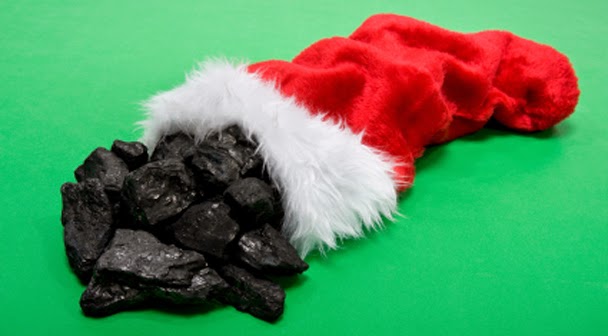 This shouldn't have come as any surprise to anyone who knows anything about the GOP.
The nanosecond the "party of personal responsibility" found out they were going to dominate the entire legislative branch, the racism, insane demands and draconian legislation proposals began streaming out as raw sewage from a busted sewer line.
The Republicans have shown they have about as much respect for democracy as the Nazis did the Weimar Republic that got them elected to power in 1933.
No sooner than the votes were tallied in all their gerrymandered districts, we began hearing the President wouldn't be invited to the House chamber to deliver the State of the Union, a presidential tradition since 1790. We began hearing other rumors the GOP would then forbid President Obama from using Air Force One. And if they get their way, before poor Mr. Obama's public service career ends the Republicans will have him running the fucking country out of a broom closet in the Naval Observatory.
But it can't be said the Democrats have been any great shakes, either. The looming budget bill, called a "chromnibus" by my senior Senator Elizabeth Warren, is not only a naked giveaway and massive Christmas present to Wall Street, it's being negotiated by so-called Democrats working in collusion with Republican lawmakers. It reads as if it was crafted by a multiply-cloned Max Baucus come back from the weeds with a vengeance.
To give you just a few bullet points regarding this steaming pile of shit charitably referred to as a "spending bill", the bill in its present state would consist of this:
Essentially a repeal of much of Dodd-Frank, a tepid, watered down replacement for Glass-Steagall at best, that would allow Wall Street banks to continue in risky and pre-doomed derivative speculation that Glass Steagall had forbade. It would also put the American taxpayer on the hook for the inevitable bailout. The 2008 and 2009 TARP bailout has already been estimated by the Federal Reserve Bank of Dallas (pdf) to have cost the American taxpayer between six and 14 trillion dollars, which could come out to $120,000 per household. To put it in its simplest terms, it would once again reward Wall Street for criminal behavior.
It would ramp up Citizen's United to the point where it would allow oligarchs to spend $777,000 or more on political campaigns and PACs.
Oh and it would raid the pension funds of up to 1.5 million retirees. It would also, according to the WaPo, slash the budget for the IRS, always a favorite target of Republicans, to the point where they wouldn't be able to go after their tax-dodging billionaire bosses (not that the IRS is much invested in doing so, to begin with). That's right. This so-called "spending bill" would do exactly the opposite where the IRS and other perennial right wing targets are concerned.
In other words, bloated and flushed with their newfound majority, Republicans plan on presenting the bottom 99% with a giant stocking filled with coal and not even the mythical clean-burning coal, at that. And all with the help of Democrats who are more concerned with submissively showing their belly to the Republicans than actually doing what's right.
This can be viewed as a microcosm of what's wrong with today's Democrats in general, a telling synecdoche of why more of us don't turn out for elections and especially midterms. They are weak and fractured at best even when they have the majority in one or both houses of Congress. They are constantly infested with Blue Dogs who all but caucus with Republicans. At worst, they are seditious and collusive, showing their complete lack of a spinal column when the GOP gets the upper hand in one chamber or the other.
And I don't want to hear any shit from people who cherry pick tiny nuggets of so-called progressivism and say, "I don't want to hear any shit about there being no difference between the parties."
Because they all work for the same Wall Street banks and Fortune 500 companies. Freelance journalist Michael Collins calls both sides of the aisle "The Money Party." This is why I don't always vote Democrat and refuse to even listen to those who rail about my doing so making me a Fifth Columnist that empowers the Republicans.
They don't need my help because the current crop of DINO douchebags is already doing that.
Elizabeth Warren (except regards her troubling support for Israel) usually finds herself on the right side of an argument. And when she comes out swinging in favor of Joe Lunchpail, one can tell it's not merely the empty, populist soaring rhetoric we hear from time to time from the asshole in the Oval Office. And until we begin electing real Democrats like Elizabeth Warren and fewer glassy-eyed lunatics such as Joni Ernst and corporate meat puppets like David Perdue, registered Democrats and progressive Independents will continue avoiding the polls in droves on Election Day. Until that day comes, Senators such as Bernie Sanders and Elizabeth Warren will continue to be Congressional Cassandras, doomed to be ignored in spite of the truth of their words.
0 comments