It's difficult to remain solemn and respectful in the wake of yesterday's newest shooting at Fort Hood that claimed four lives and injured 16 others. Certainly, the tragic subject matter doesn't exactly readily lend itself to satire and snark.
That's why we have people like Pat Dollard and Dana Loesch, "people", for want of a better word, who sally forth, heedless of social conventions by going where no wingnut has gone before, contemptuous of the Obama-era czars of basic human decency.
Because, according to former talent agent Pat Dollard (Breitbart's Big Government, Big Hollywood, Big Douchebag, etc), we should murder all the Muslims over this before the identity of the shooter has even been ascertained. Steve Douchey of Fox and Friends With Benefits wasted no time blaming Obama for the Fort Hood shooting within the first 24 hours, even going as far as quoting a mouth-foaming right wing moron like Gateway Pundit who gave Douchey his talking points for the day like a moth-eaten Karl Rove.
Point in fact, the shooter was no more Muslim than the President was to blame for this. The alleged shooter's name was initially reported as being that of Army Specialist Ivan Lopez, an Iraq war veteran who served four months in Iraq and was being treated for Post Traumatic Stress Disorder. So, if you want to blame a Commander in Chief for this, look no further than George "Don't Burn the Oil Fields" Bush.
Of course, it took Dana Loesch no time flat to show what a class act she was by showing more sympathy for her fellow gun clutchers who won't lose their guns over this than the 20 victims of this latest Ft. Hood shooting. Cristina Hassinger weighed in on Loesch by saying... Well, why don't I let the principals speak for themselves? 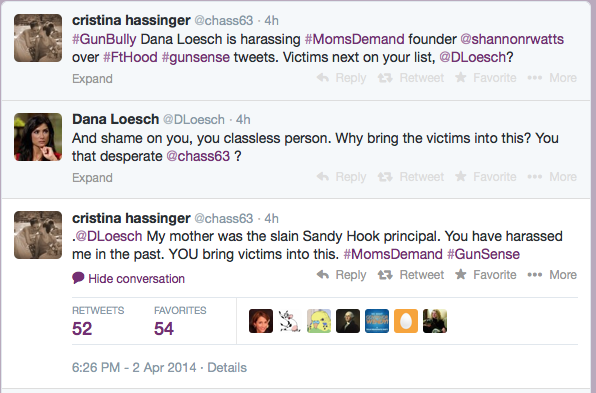 Oops.
Undeterred, Dana then made herself the victim in true right wing fashion after she got into it with TBogg, who put the results up at his place, Panic in Funland: 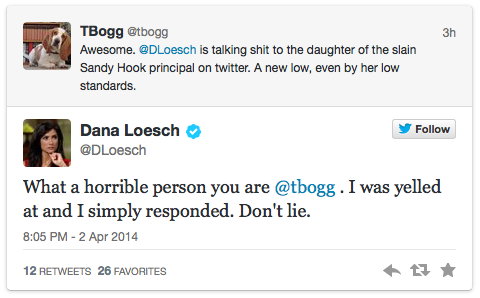 After sniffling that SHE was the one being harassed on Twitter by the daughter of the slain Sandy Hook principal "for bring(ing) the victims into this", the loathsome Loesch really let TBogg have it between the eyes, uh, somehow, for something only she can tell us.
O, the inhumanity. O, the inanity.
So, the moral of the story, kiddies, is that it's always the black guy's fault no matter what, we should slaughter every Muslim in America for something a Latino does to people they don't even know and right wingers should be allowed to attack whomever they want then whine about being swarmed by the blue meanie birdies on Twitter when their targets hit back. And feeling persecuted is sure a strange tack to take considering loonies like Loesch have almost all the guns and ammo.
And every shooting becomes a referendum on the rights of gun ownership whether or not the black guy said he wants to take away your guns. The running theme in the gun control debate is that on the far right, more sympathy is shown for gun owners, even those carrying out these crimes (Yeah, Zimmerman, I'm looking in your direction) than for the innocent victims of these crimes. And the fact that eludes these cordite-huffing psychopaths is it's not us gun control proponents they have to worry about but fellow gun-clutchers like themselves.
You know, Wayne LaPierre's "good guys with guns."
3 comments

Mauigirl said...
It always amazes me that these rightwing gun lovers like to characterize themselves as victims.
4/3/14, 3:24 PM

Anonymous said...
Please ask for help and use it to simplify your life. Come South and leave only the useless and negative behind. You can enjoy life.
4/4/14, 11:09 AM

e.a.f. said...
If we were to follow through on the idiots' position on this, the next time a white guy shoots some one we should go out and kill all white guys. O.k. got that.

The next time some person shoots and kills people, we go out and shoot to death all gun owners. O.K. got that.

If any "Christian" goes out and shoots a few people, lets go out and kill all the Christians. Oh wait aren't they doing that in some countries and these tea baggers want the U.S.A. to go to war over this......