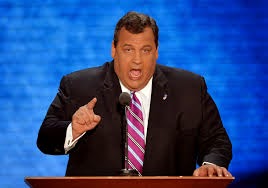 "My million dollar lawyers said I was innocent because... hormones! Now someone make me a sammich!"
(By American Zen's Mike Flannigan, on loan from Ari.)

If the mainstream media was worth the biomechanical electricity required to hit a button on a remote control, it would've long ago pointed out the screamingly obvious fact that a sitting chief executive does not have the final say over his guilt or innocence in a scandal by hiring a million dollar-a-pop white shoe law firm. That's up to legislative ethics committees and, if necessary, courts of law.
Or, as NBC's own website says,


Critics have pointed out Christie's close ties to the chief of the law firm and said that the report lacks crucial testimony from those most deeply involved with the lane closures, including Kelly, Stepien, former Port Authority staffer David Wildstein and Port Authority Chairman David Sampson.

Yes, indeed. Just as the FBI was blocked from interviewing potential crucial witnesses (that would be the bin Laden family) in the first days after 9/11, the law firm of Gibson, Dunn & Crutcher either blocked themselves or were instructed to never interview exactly the very principles involved in the Bridgegate scandal that closed all but one lane on the GWB starting on the first day of school last year. The most conspicuous absence of depositions was that of Bridget Anne Kelly, Christie's former Deputy Chief of Staff.
And yet, despite David Wildstein's charge that Christie knew about the lane closures before, during and immediately afterwards, this law firm that enjoys very cozy ties with Christie announced with all the credibility of the 9/11 and Warren Commissions that Christie's innocence in the matter "rings true."
Unfortunately and amazingly, NBC's Carrie Dann, who wrote the article,  either elected to ignore and was blithely insensible to the rampant misogyny of Gibson, Dunn & Crutcher's whitewash job. Essentially, it almost completely chokes off accountability at Bridget Kelly herself and faults to a far lesser extent Wildstein himself, the guy who actually ordered the green lights turned off at all but one lane on the GWB leading from Fort Lee.
As John Amato at Crooks and Liars correctly points out,


They show no proof of their misogynist allegations, but they include them anyway, Why is that you ask? Because this is not a real internal review report, but a document that's sole purpose is to exonerate Chris Christie. Why they thought going gonzo on Bridget Kelly was a good idea I have no clue. Maybe they believe like Bryan Fisher, that women are an inferior species and make a handy scapegoat.

Which isn't to say we should have a pity party for Kelly, plainly a partisan political operative with a little bit of power and thought absolutely nothing whatsoever of inconveniencing countless thousands of motorists for four days straight in the interests of petty political revenge inspired by a desire to curry political favor from a man she knew would be pleased by this. And the "probe", plainly written entirely by men, shamelessly makes repeated references to Kelly's emotional instability, a terminated relationship and basically coming thisclose to mentioning the word "hormones."
Yet, at the very least, the report still reveals Christie as a boob who hadn't the slightest idea of what his senior staffers were doing under his nose and during a re-election campaign. At the very worst, it shows Christie as every bit the Jersey leg breaker he is by commissioning an internal probe costing the New Jersey taxpayers, at minimum, $1,000,000 to take down one woman who was but one member in a conspiracy designed solely to exact revenge on a Democratic mayor who withheld his endorsement of Christie during his bid for re-election. And it shows he is all too willing to use the tried-and-true Republican tactic of misogyny to justify his actions after the fact.
The very fact that Christie saw no problem billing the New Jersey Treasury $1,000,000 or more to have a law firm whose top dog is buddies with Christie in the interests of distancing himself from a scandal that just won't go away and to save his sinking 2016 presidential aspirations speaks volumes. The very phrase "internal probe" has about as much credibility as a crocodile in a camouflage suit.
And imagine the furor that would've arisen if it had come out that one of President Obama's Deputy Chiefs of Staff had ordered a lane closure of a major bridge because its Republican mayor withheld his endorsement of Mr. Obama's own re-election bid in 2012? John Boehner and Darrell Issa would have burns and callouses on their hands from the lynching ropes they'd be endlessly gripping.
Considering Christie's countless evils against the people of New Jersey, the Department of Education and a growing line of victims littering the wayside of Christie's potholed road to Pennsylvania Avenue, it's amazing that it took this long for one of those scandals to finally stick to his rotund body. And the more Christie tries to distance himself from this scandal, the more he lambastes former aides and school chums, the pettier and smaller he looks and the more he resembles the vindictive Chief Executive whom David Wildstein said knew about the lane closures and did nothing to mitigate them.
Indeed, for someone who's obviously adept at lane closures in the interests of petty political revenge, Chris Christie knows precious little about closure itself.
2 comments

Anonymous said...
Read this piece and no comments yet. So lonely. So this: how can we change NJ politics for the future? How do we educate the youth and get them involved in taking control of their state and resources for their own benefit? Bridgegate has shown me, for the first time, how bad politicians can really be, up close and personal in the Garden State.
3/30/14, 11:03 PM

jurassicpork said...
That's still one more than it got at my place or Scribd. Blogs are passe. They're dead.
3/31/14, 2:09 PM
Post a Comment
<< Home
Contact
Home
Email:
brilliantatbreakfast at gmail dot com
RSS