Who Would Jesus Starve?
Posted by jurassicpork | 2:06 PM 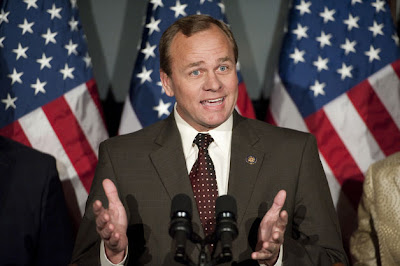 Meet two-term Teabagger Congressman Stephen Fincher, easily the most insane one from Tennessee next to abortion advocate Scott Desjarlais. Today, on the floor of the US House of Representatives, Fincher stood up on his hind legs and quoted a Bible verse from Thessalonians that he'd offered as support that we should let poor people starve. Fincher, you see, was responding to Juan Vargas (D-CA) who'd quoted his own Bible verse from Matthew that essentially said Jesus was committed to feeding the poor (Both quotes from the Bible are egregious sins against the mandate separating Church and State but at least Vargas gets brownie points for getting Jesus' priorities right).
Last March, Fincher became one of a growing number of "fiscal conservatives" led by Rick Scott who wants welfare recipients to be drug-tested before they receive any money. This farmer/gospel singer-turned Congressman is leading the fight in the House in which foaming-at-the-mouth right wing ideologues who have no problem with endless tax cuts for the top 1% want to take away virtually the only thing keeping body and soul together for many poor families and households who can't find work: SNAP benefits. In fact, they're looking for $20,000,000,000 in SNAP cuts over the next decade while the Blue Dogs of the Senate are looking for a "mere" $4 billion in cuts, meaning they have no problem with letting only some needy people starve.
Even before I had to get on the SNAP program myself two years ago, I would've had a major problem with walking brain stems like Fincher trying to literally take food out of the mouths of needy men, women and children. The Bible quote Fincher just used in the House today goes, “The one who is unwilling to work shall not eat." In other words, "Your Jesus can blow me, Rep. Vargas. He had fucked-up priorities. If you're on any kind of federal assistance that isn't tied to a corporation or company, then you don't want to work since there's about one job for every three applicants, plenty to go around. And if you don't want to work, then you should starve to death in the richest nation on earth because some old anonymous Jewish guy said so."
Fincher is essentially George W. Bush on steroids and with an extra asshole gene. Last September even while running for re-election, Fincher introduced another insane bill that would've essentially dismantled the US Constitution and replaced it with Judeo-Christian ideology. And just 13 months ago, Fincher also demanded we "cut the EPA's legs off" (one that's already been virtually hobbled and decapitated thanks to the Obama administration and the GOP-led House).
Again, Fincher alone got nearly $4,000,000 in federal farming subsidies plus a nearly $14,000 grant for heavy equipment, all courtesy of the US Dept. of Agriculture (and John Q. Public). He's also received more NRA money than any US Congressman or Senator, even, which is saying something about an entire political party that'd been bought and sold since time immemorial by the NRA. Two years ago, CREW named him one of the most corrupt people in Congress. During his election, he was embroiled in a campaign finance scandal involving his own father's Savings & Trust in which it was proven he'd broken several laws, according to the FEC, and yet no charges had even been filed. Even the Teabaggers who'd initially supported him were ready to 86 his fat, welfare-sucking ass over the farming subsidies until they got even stupider and decided to vote for the hypocrite with the "R" after his name. Then they saw fit to re-elect him last November.
Now, it's expected that Teabagger Republicans will automatically go after the neediest and most indigent in their faux outrage over government spending (that never seems to bleed into trillions being spent on needless wars and war profiteering contracts). What makes Fincher especially slimy is his rank hypocrisy since his farming company has received about $10,000,000 in farm subsidies just in the last decade.
Essentially, whatever pro-corporate, anti-poor movement that starts brewing in the US House of Representatives is virtually guaranteed to have Fincher's greasy paw prints all over it. One has to wonder how many morons in the 8th district who'd voted for him back in '10 and again in '12 are on SNAP or some other kind of federal assistance program who nonetheless voted for him and against their own interests simply to keep the guy with the "D" after his name from getting in. In point of fact, 17.6% of Tennessee residents receive SNAP (.pdf), one of the highest percentages in the nation, while 22.1% of the 8th district he represents (.pdf) receives SNAP benefits (second highest of all nine of TN's congressional districts), making, next to Mark Sanford's supporters in SC's 1st district, the stupidest voters in this galactic quadrant.
As long as stupendously corrupt, racist, sanctimonious, economic sadists and hypocritical godbags such as Fincher remain in Congress, we will never, ever continue advancing as a species.
2 comments

jurassicpork said...
Has anyone noticed the ubiquitous flag lapel pins of the Bush era have been replaced with NRA pins even among Democrats?
5/21/13, 12:30 PM

e.a.f. said...
Fincher can't even get the Bible correct. The quoted line is about those who are "unwilling". There is no proof people are unwilling to work. It is simply, there is no work. The jobs were exported to other countries.

starving to death in the U.S.A. isn't new. There is a picture of a woman with her baby, in the South, in about 1951. The baby has starved to death. That is when the federal government decided to do something, not much, but something. You can't come through a war, rebuild Europe and Japan and let your own citizens starve to death.

What people can do is file a complaint with the United Nations. Up here in Canada many of us know there is something amiss when it comes to the RCMP and First nations Women in northern B.C. Not to mention all the murdered First Nations women.

During the recent news regarding the 3 young women in Cleveland being found, there was a lot of information about Cleveland in the press and on line. If the U.S.A. is supposed to be the wealthiest country in the world, I don't know where Cleveland is supposed to be. it looked a step up from some of the barrios in south american. Houses boarded up, streets not maintained. When you saw pictures of inside people's homes, they were clean and neat but you could tell there hadn't been anything new in them for 30, 40 yrs. It is obvious the U.S.A. for the majority of citizens is not a wealthy country.

Most of it of course can be laid at the feet of those who shipped American jobs overseas and then dismantled the social safety net.