Brilliant Recent Posts
I had my name because my mother changed hers. So ...
My Catholic friends
Somewhere in America, a Brooks Brothers is Missing...
Because she said so, that's why
Really, people, did Seth MacFarlane ever stand a c...
Useful Idiots
The Stupidest Staff in Congress
The sociological perspective on navigating in and ...
If He Hollers, Don’t Let Him Go
Yes I am still alive


It's Official
Posted by jurassicpork | 1:16 PM 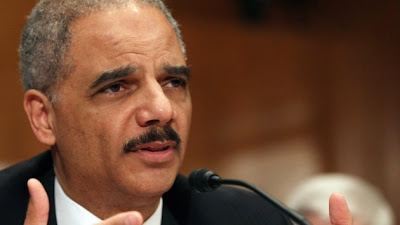 "I'd love to be able to do my job, gentlemen, but Goldman Sachs is holding my testicles hostage."

Eric Holder's more worthless than Erik Erikson will prove to be for Fox "News."
In an amazing round of testimony (or should we spell it "testimoney"?) before the US Senate, Attorney General Eric Holder admitted to Chuck Grassley that Wall Street banks are indeed too big to jail. This is what he'd actually said to Grassley:

I am concerned that the size of some of these institutions becomes so large that it does become difficult for us to prosecute them when we are hit with indications that if you do prosecute, if you do bring a criminal charge, it will have a negative impact on the national economy, perhaps even the world economy. I think that is a function of the fact that some of these institutions have become too large."(emphasis added)

Now, I don't know about you but this essentially means, "The FTC (Federal Trade Commission) isn't doing its job and enforcing the antitrust laws put in place by your predecessor Teddy Roosevelt about 100 years ago." Because this is partly the FTC's job, to make sure that utility companies, banks and so forth aren't allowed to grow into a monopoly.
Or, to put it in more visceral terms, our top law enforcement officer said, "Yeah, we can pull the dagger that is Wall Street out of the heart of Middle America but then the patient will die." This is the exact rationale behind antitrust laws of a century ago: By checking their size, thus compartmentalizing American banks and corporations, if one fails it won't flood the entire economy and drag the rest of the country into Davy Jones' Locker with it. Yet, this is exactly what we're seeing.
And when a corrupt piece of shit like Chuck Grassley is asking you point blank why you didn't file criminal charges against British banking giant HSBC on money laundering charges (The Iranians, Libyans and Mexican drug cartels), even if it's only in the interests of political kabuki, then you know this country has gone to the dogs (Or should I say the jackals?).
Props go to Senators Sherrod Brown and Jeff Merkley for introducing legislation that would break up the big banks that have profited so handsomely off the American taxpayer and the Fed after being caught red-handed pilfering from the cookie jar. But anyone in the know knows that Brown's and Merkley's bill has about as much chance of even getting out of committee as Mother Jones catching Dick Cheney volunteering in a soup kitchen.
Gone are the lessons of history and doomed are we to repeat it, the lesson being if you don't ruthlessly regulate Wall Street banks, oil cartels and so forth, they will merge, they will consolidate and they will eventually get so big that the effect of putting this executive scum in prison will have the effect of pulling a 100 pound leech or tick off a 200 pound body. In fact, rather than stopping at breaking them up so the pieces can start oozing toward each other and consolidate all over again as Rockefeller's Standard Oil did when John D. began buying up all the Baby Standard oils, it's obvious we need to nationalize it. 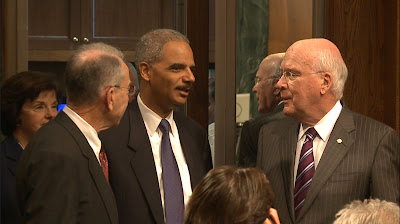 But the fascist, corporation-sucking Obama administration will never go along with that, otherwise we wouldn't be seeing one silk-suited parasite after another occupying key administration posts, infesting the Treasury and forming the nucleus of administration advisory committees (Jeff Immelt, the job outsourcing Jobs Czar? I still can't wrap my mind around that.). It was the Obama administration that whistled Dixie and looked the other way when it was revealed that major American banks were laundering money for regimes and criminal enterprises such as Mexican drug cartels and it was the Obama administration that pushed just as hard as the Bush administration for the release of the second half of the TARP bailout.
But the US Congress, in saner past times, had successfully broken up Ma Bell and Standard Oil. It was the FTC that in the 90's broke up the proposed merger of Bertlesmann AG, Ingrams and Borders, Inc. that would've effectively put a stranglehold on the book publishing, distribution and marketing industries. And, as I'd just mentioned, Congress also broke up Standard Oil's monopoly.
And yet, the phone companies thrived and we're now seeing another pair of monopolies in the form of Verizon and Comcast. Standard Oil's various parts were bought up by Rockefeller and he became richer and more powerful than ever. And consolidation in the publishing world has continued to the point where the Big Six are about to become the Big Five when the dreaded Random-Penguin merger goes through.
This is why merely breaking up these entities into smaller units that can then theoretically compete with one another isn't enough and why we need to nationalize the big banks. Instead, we have a Congress that waggles its gnarled, bony finger at Major League Baseball and threatening its antitrust exemption for steroid use. But when it comes to breaking up the big banks and actually enforcing existing antitrust laws, these plutocratic senators and congressmen and one dickless Attorney General after another get the dry heaves at the very thought.
We'd nationalized Fannie Mae and Freddy Mac and their top executives are still pulling in $6,000,000 a year apiece. Nationalizing and regulating Too Big to Fail/Jail corporations is not a death knell or creeping Socialism as right wing nut jobs would have you believe. At best, breaking up criminal enterprises such as Goldman Sachs, Citigroup and JP Morgan Chase will only retard their growth until they can find more sleazy loopholes in the antitrust laws.
But it would be a step in the right direction.
3 comments

George Sands said...
This is an outrage! President Romney would have been on the case like white on rice.

Besides which, here's a photo of your parents gettin' it on:

Bob said...
This shit is outrageous. There have been revolutions caused by this kind of arrogance. To some extent, our own.
3/13/13, 1:42 AM

e.a.f. said...
What a load of horse hockey pucks. They are not too big to jail. You take the executives, charge them, arrest them, leave them in jail pending trial. I am sure there will be other ceos who can step into the positions. Perhaps not Americans or crooks but rest assured there will be bank executives who can replace these idiots,. No ONE IS IRRESPLACEABLE AT A PLACE OF WORK!\
If a government official is spouting this type of bull shit, the official needs to be replaced. If they can impeach a president of the U.S.A. then they can toss a crooked banker into jail.

What is really funny about this is, the republicans want to give these crooks tax breaks because they are the 1%ers. This keeps up the Americans will have their own "spring"
3/13/13, 7:08 AM
Post a Comment
<< Home
Contact
Home
Email:
brilliantatbreakfast at gmail dot com
RSS