Brilliant Recent Posts
It's Official
I had my name because my mother changed hers. So ...
My Catholic friends
Somewhere in America, a Brooks Brothers is Missing...
Because she said so, that's why
Really, people, did Seth MacFarlane ever stand a c...
Useful Idiots
The Stupidest Staff in Congress
The sociological perspective on navigating in and ...
If He Hollers, Don’t Let Him Go


Perception is Everything
Posted by jurassicpork | 2:08 PM
(By American Zen’s Mike Flannigan, on loan from Ari.)

Visit NBCNews.com for breaking news, world news, and news about the economy

Let's get one thing straight: I never liked Bill Maher. The one time I was on Real Time, Maher proved to be just a smarmy, arrogant cocksucker who flaunted his substance abuse and sexual addiction issues for cheap laughs. I dislike him twice as much after he'd come out a couple of Fridays ago in favor of Rand Paul's ridiculous filibuster and Obama's drone strikes, apparently uncomfortable with yet being quite comfortable with the horrendous collateral damage our drones are inflicting on Third World nations such as Pakistan, Yemen and Afghanistan. I'm no big fan of ABC, either, but the more Maher speaks, the more I admire the Mouse network for firing his ass.
However, let it not be said yours truly is above stealing a good line when it's deserved (Tit for tat, as Maher and his cybernetic cat burglars had stolen material from my byline without warning or attribution in years past). On last Friday's show, Maher called CPAC an "open mic from Hell" (although I don't get why Maher apologist and fanboy Kevin Cirilli insists on calling Maher a "liberal."). While I regret the attribution (Are we taking notes, Billy?), that's probably the best one liner that'll be delivered that encapsulates the entire CPAC convention in Maryland this week.
As usual, the Karnival of Kwazy Konservatives provides enough lunacy for 100 volumes of the DSM-V, so much lunacy, in fact, that one person cannot possibly keep track of it all let alone keep track of it and comment on it. But yours truly, from the state of Maryland, has put body, soul and mind at risk by going there (You owe me a fat, greasy one after this, Ari) to do his level-headed best to document the atrocities, as Atrios would say. So, let's start with the guy who'd inspired the title of this post, former Florida Governor Jeb Bush, the little bro who'd handed the presidency to his idiot older brother on a silver platter.
Chowder-headed Jeb said at CPAC yesterday that the Republican Party has "a perception problem", that the American people "believe" the GOP is the Party of No, that they're anti-women and gay rights, anti-science, anti-immigration, anti-minority, anti-this, anti-that. Poppycock, Jeb said, and that they have to work harder to get the minority vote that his own Secretary of State Katherine Harris through ChoicePoint worked her bony ass off to disenfranchise during his brother's presidential campaign in 2000.
Jeb, being a typical delusional Republican, insists that we Americans share the Republican Party's core conservative principles, despite getting their fat asses handed back to them in 2006, 2008 and last November. For sheer, impenetrable delusion, it was right up there with Mitt Romney's speech in which he vowed, "We will win." What Mittens didn't have to say and what I'm sure was on the spiked tip of every tongue and pointy head in attendance is that they obviously won't do it with him on the ticket since Romney's proven in spades to be about as popular as Hanta virus in an African village.
Bush's and Willard's speeches typify a Republican Party and conservative movement that's hoarsely screaming about white disenfranchisement, gay rights and other hood ornament issues so loudly that they utterly fail to realize the rest of the country left them behind. To show how out of touch Romney was during the expenditure of his remaining hot air from his fourth and hopefully last lead balloon of a campaign was the fact he couldn't even remember (again) when Election Day was (It was the 6th, Willard, not the 7th).
They also typified a Republican Party that bristles up in right proper white indignation like a porcupine with its dander up whenever they're called on their screamingly obvious misogynism, homophobia, xenophobia and outright racism. According to Jeb and Willard, it's not that the American people are finally waking up and seeing these spittle-flecked maniacs for what they are. It's just "a perception problem" and Jeb was thisclose to blaming the Vast Left Wing Conspiracy and the media for pulling the wool over the eyes of the nearly 70,000,000 voters who'd supported Obama and would've given the House majority back to the Democrats were it not for some sleazy gerrymandering.
To make my case, let's take just one example on an issue that you would think, in 2013, wouldn't be an issue. An obviously misguided black conservative headed a discussion at CPAC in which he, too, claimed conservatives should reach out to fellow minorities (and proposed the incredible idea of calling themselves Frederick Douglass Republicans, as if the great abolitionist could possibly find any common ground with today's GOP) instead of remaining comfortable being labeled the party of racists. This led one redneck from North Carolina to immediately begin crowing about the disenfranchisement of white voters and essentially coming out in favor of slavery. After inspiring shock from some but support from others, this resulted in a shouting match and verbal free-for-all that ended any serious discussion or delusions thereof.
The inexplicably incumbent Michele Bachmann had her John F. Kennedy moment by announcing we could cure Alzheimer's in ten years if we just cared more like her Tea Party ankle-biting constituency and held up Dr. Jonas Salk and his polio vaccine and his wonderful selflessness in giving it to President Eisenhower instead of patenting it and making millions. But the truth is, if polio was still a threat and Dr. Salk had just developed his polio vaccine, Bachmann and her fellow Republicans would pillory Salk for just handing it to Obama instead of selling the patent to a pharmaceutical giant.
Then again, Bachmann is clearly insane outside of Minnesota's 6th congressional district and should be entertained as seriously as those mentally-challenged people you occasionally hear bellowing tunelessly in lines at supermarkets and banks.

And in case Bachmann's historically- and scientifically-challenged conspiracy theories aren't enough to slake the feverish conservative imagination, take a gander at some of these offerings (click on the image to get a better idea of the spectrum of lunacy currently slinking around Maryland.).
Poor GOProud's Jimmy LaSalvia, whose conservative gay rights organization had been once again banned from sponsoring CPAC, showed his own delusion by insisting that only "a few in our movement" within the conservative movement don't like gays and they should really try really hard to like teh gays and lesbians because, well, they should, pretty please? OK, Jimmy, here are just a few of "a few in (your) movement" who don't think guys like you should have the right to marry whomever you please. And while we're at it, here's another who was so stunned by Rob Portman's convenient and hypocritical sudden support of gay marriage that he was literally left speechless.
For those whose interest in CPAC begins and ends with the Second Amendment, there was NRA geek-for-hire Wayne LaPierre, who delivered a typical conservative, "I know what I am but what are you?" speech by calling the NRA's critics "crazy." Oh, and he also veered time and again into conspiracy-theory-newsletters-printed-in-the-basement boilerplate by announcing the Obama administration's idea to register all gun owners is so the Chinese can hack it and sell it to the Mexican government. Yes, yes, he actually said that. You wouldn't think anyone at CPAC could make Michele Bachmann look like Margaret Fuller on a Wheaties day but there you have it.
And, least we forget it, we got a glimpse into how conservatively compassionate NRA President David Keene is (whose son was arrested a decade ago over a road rage shooting incident) when he backed up a lobbyist who condescendingly referred to the Newtown shootings last December as "the Connecticut Effect". The NRA initially tried to distance itself from Bob Welch after those statements, claiming that he didn't represent the NRA, after all. But now that the furor over Sandy Hook has died down a little, political self preservation has once again gone out the window with LaPierre's breathless conspiracy theories and Keene's insistence that Welch has nothing to apologize for despite mortifying and angering dozens of Newtown families with his sociopathic remarks. 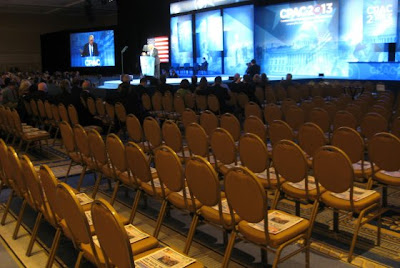 And while Karl Rove wasn't getting booed in absentia for suggesting he'd work to primary Steve "Happy Xenophobe" King of Iowa, Donald Trump gave a cock-stroker of a speech bragging about making $8 billion and saying the nation "is run by very stupid people" to a mostly empty convention hall.
Like Maher said, you don't need to be here like me to know what they're going to say because they spew the same misogynist, racist, homophobic, gun-clutching bullshit year after year. These people truly are the real conservatives in this country because they never change, evolve or alter their thinking. They are not, as Rob Portman showed, capable of even hypocritical and self-serving policy reversals. They will kick out and/or ostracize their kids if they admit they're gay or dating or marrying someone of color. They will never reach across the aisle because they're not even aware an aisle even exists much less a differing viewpoint.
These are the people that Joey Scarborough recently derided as being illiterate and used for cynical gain by opportunists such as Ted Cruz, whom Scarborough accused of being "willfully ignorant" and "condescending."
What CPAC and its luminaries of hasbeens and alsorans have yet to realize is this demographic is, thankfully, dying off one by one, a fact that, along with inevitable enlightenment, is the biggest reason why the GOP has been on a losing streak (aside from 2010) since 2006.
3 comments

Lexington Green said...
Here's why Feinstein's bill may well be found unconstitutional, at least in light of Heller. Heller employed the "in common use" test, which has been used in subsequent court cases to overturn handgun bans. The AR-15 is the most popular rifle in America, with some 1.5 million in circulation. It's hard to argue that it's not "in common use."
3/16/13, 2:24 PM