Brilliant Recent Posts
Why I Love the Internets
Separated at Birth?
Cutting off your nose to spite your face
For Sale, One Democracy, Slightly Used of Late
From Switzerland, With Love
Saturday Scumbag Blogging
I'm starting to understand why people get hospital...
Top 10 Lies Told by Mitt Romney at the 2nd Debate
When Reason Fails... Bully!
Blinders Vs Binders 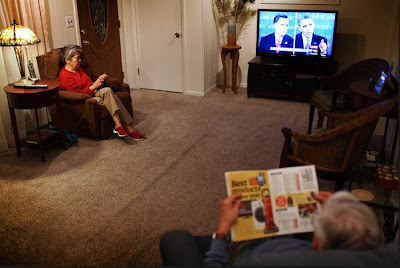 As with the last debate, I'd wisely taken a pass at the one that took place in Boca Raton last night. I've made up my mind who I'm voting for two weeks from today and Obama's not getting my vote again if he ejaculates cancer-curing rainbows from his dick. His so-called foreign policy is, for me, the biggest deal-breaker out of many (the 2nd round of bailouts, kowtowing to Wall Street and the GOP, ObamaCare, the undermining of unions, figuratively spitting at liberal critics, his longstanding support of DADT and DOMA until election year drew near, cutting the Social Security tax, escalating Afghanistan, keeping us in Iraq for three more years to no effect and whining about not getting credit for dreaming up the insane idea that cutting the social safety net would somehow magically balance the budget being among the endless list of other deal-breakers).

And, as reluctant as I am to write about something I refused to witness, I have to say one needn't be a witness to a historical event to critique a book written about it and, journalism being history's first draft, it's not going to hurt to comment on last night's debate after having read a few reality-based analyses on it.

And, without having to suffer through one second of the foreign policy debate, it was obvious that, as always, we're left with two choices: Voting for a man that we ought to hate for what he's done or a man whom we ought to hate for things that he will do. Peter Baker and Helene Cooper had concluded in the NY Times,


For all its fireworks, the debate broke little new ground and underscored that the differences between the two men on foreign policy rest more on tone, style and their sense of leadership than on particular policies. Mr. Obama and Mr. Romney seemed to align on matters like withdrawal from Afghanistan, the perils of intervening in Syria and the use of drones to battle terrorists.

So there you have it, although that's but one, maybe two opinions on how disturbingly similar these guys are regarding foreign policy. They argued with each other over tremendous trifles while agreeing with one another whether or not they'd admitted as much, on a number of issues.

But while Karl Rove was at home sitting in his boxer shorts and waving a giant foam middle finger at his TV and tweeting about how Romney was winning the debate, it was completely lost on him and other wingnuts that Romney, as Esquire's Charles Pierce tells us, sold him, his buddies in the military/industrial complex, the GOP and its enduring but dying blood-stippled neocon agenda up the river.

Because the only Mitt Romney character that Mitt Romney would ever think to reprise is the Moderate Mitt we saw at the second debate. And Moderate Mitt has a lot in common with Obama, such as agreeing to the 2014 timeline for withdrawal from Afghanistan, that Iran is a threat that must be dealt with and agreeing over economic sanctions that are, as usual, guaranteed to hurt just the poor and middle class of Iran and not the ruling class. They both vied for the cock of Bibi the Yahoo and argued over who could make him cum in their mouths the fastest.

But the real Mitt, the one that's dying to scratch out of those beady little glass eyes that flare up the minute someone tells him he may be ever so slightly disingenuous, was showing through like the steel belts on an all-weather radial about to blow. Despite stealing the line that "we can't kill our way out of this mess", it's abundantly clear that Romney would be an even bigger foreign policy disaster than Obama and perhaps even Bush. And it seems that Romney lost the debate, and perhaps his latest (and hopefully last) failed bid for public office, the second Obama had to talk down to him like the foreign policy antiwonk that he is and explain to him about the smaller Navy and things like aircraft carriers. For the first time in American history, neither major candidate has any military experience whatsoever and Romney had to be schooled about a basic fact like the Navy and got properly zinged by Obama's now famous, "horses and bayonets" comeback.

And it seems thinking liberals who still haven't discovered that there are other parties with other candidates running for the presidency will wind up voting for Obama simply because he's got four years as POTUS under his belt. Romney showed how stupendously unqualified he is and how astoundingly inept his foreign policy advisers are (Romney and Ryan have actually been getting intelligence briefings since last month. Make of that what you will, you hilarious internet wags, but one senses that the Obama administration is giving the president the real stuff while playing a prank on Camp Romney and giving them stuff written by the staff of the Onion).

Otherwise, what other conclusion can one come to when Romney stated that we've never created or propped up dictators? Really? Such as Saddam, the Shah, Pinochet, Noriega and the creation of al Qaeda? One is kept awake at night by the haunting fear that if Romney had appeared on a foreign policy-themed edition of Are You Smarter Than a Fifth Grader?, he'd go home humiliated and empty-handed while Josh Romney glared at the kids.

Mitt Romney is so stupendously unqualified to be anything or anyone more responsible than dog catcher that it no longer makes sense at how he'd managed to beat off the other Republican lunatics to get the nomination. The only thing Mitt Romney has ever been good at is making piles of money he never earned, dodging wars and taxes and firing people. And, as horrible as Obama has been and will continue to be both domestically and abroad, America will absolutely not be able to survive four years of Mitt Romney.
1 comments

Anonymous said...
Has anyone ever fact checked the debates for president before, after the election?