Brilliant Recent Posts
Monday Big Blue Smurf Blogging: Dispatch From Und...
Sperm does not carry the ability to do journalism
Around the Blogroll and Elsewhere: Special What D...
Blogrolling In Our Time
The Three Ring Circus
How did it come to this? A Rant.
So much for the "invisible hand"
Politico uses the "T" word
"They have not been elected as dictators of the Un...
Is MSNBC deliberately trying to taint its own brand?


Another columnist uses the "T" word
Posted by Jill | 4:56 AM
It's too bad guys like Fareed Zakaria and Joe Nocera, the latter of whom is the latest pundit to recognize out loud that the Tea Party members of Congress are nothing but economic terrorists bent on the destruction of this country in their lust for power, weren't talking like this two years ago, when a very small but vocal minority of Americans, whipped into a frenzy by Rick Santelli and the Koch Brothers, went to rallies dressed up in 18th century costumes spouting nonsense about a Constitution they didn't understand and about keeping the government's hands off their Medicare. The Tea Party was loud and shrill and "colorful", so the media elevated an ignorant fringe to the status of Major National Movement, and now here we are. While I'm glad it isn't just Krugman anymore, there does seem to be an element of closing the barn door after the horse has escaped to Nocera's column today (NYT link):

These last few months, much of the country has watched in horror as the Tea Party Republicans have waged jihad on the American people. Their intransigent demands for deep spending cuts, coupled with their almost gleeful willingness to destroy one of America’s most invaluable assets, its full faith and credit, were incredibly irresponsible. But they didn’t care. Their goal, they believed, was worth blowing up the country for, if that’s what it took.

Like ideologues everywhere, they scorned compromise. When John Boehner, the House speaker, tried to cut a deal with President Obama that included some modest revenue increases, they humiliated him. After this latest agreement was finally struck on Sunday night — amounting to a near-complete capitulation by Obama — Tea Party members went on Fox News to complain that it only called for $2.4 trillion in cuts, instead of $4 trillion. It was head-spinning.

All day Monday, the blogosphere and the talk shows mused about which party would come out ahead politically. Honestly, who cares? What ought to matter is not how these spending cuts will affect our politicians, but how they’ll affect the country. And I’m not even talking about the terrible toll $2.4 trillion in cuts will take on the poor and the middle class. I am talking about their effect on America’s still-ailing economy.

America’s real crisis is not a debt crisis. It’s an unemployment crisis. Yet this agreement not only doesn’t address unemployment, it’s guaranteed to make it worse. (Incredibly, the Democrats even abandoned their demand for extended unemployment benefits as part of the deal.) As Mohamed El-Erian, the chief executive of the bond investment firm Pimco, told me, fiscal policy includes both a numerator and a denominator. “The numerator is debt,” he said. “But the denominator is growth.” He added, “What we have done is accelerate forward, in a self-inflicted manner, the numerator. And, in the process, we have undermined the denominator.” Economic growth could have gone a long way toward shrinking the deficit, while helping put people to work. The spending cuts will shrink growth and raise the likelihood of pushing the country back into recession.

Last night we heard that Obama WAS willing to play the 14th Amendment card if no deal was reached. How true that is, I don't know, because apparently this came from Joe Biden rather than out of the mouth of a president whom I have become convinced has wanted draconian cuts of benefits to the elderly and the poor all along, the better to ingratiate himself with the Wall Street masters who will offer him a nice chunk of change and a cushy job when he leaves office. Because after all, what must seem more appealing right now, an eight-figure Wall Street job or enduring another four years of this? Because at this point, there's nothing to do but paraphrase Walter Mondale and the 1984 Democratic Convention again (for the second time this week): The Republicans will screw you over and so will the Democrats. The Democrats won't tell you. The Republicans will. At least with the Republicans we know what we're getting, while Nancy Pelosi makes pretty speeches and then votes "Yes" on cutting Medicare.

Yesterday I received the most disgusting piece of political mail that the Democratic Senatorial Campaign Committee has ever sent. It has Al Franken's name on it, which I guess is designed to target the "professional left" for whom the party has such contempt, and it exhorts me to "stop the radical right." Contained in the letter are the following postcards: 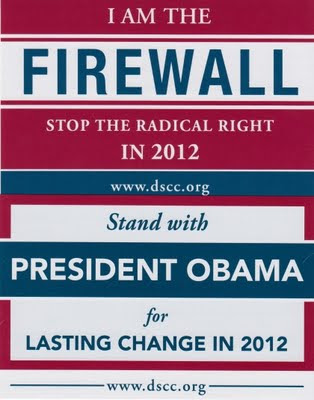 Who the hell do they think they're kidding?

Ara said...
The best way to stop the teabaggers is to strike at the root: stop corporations from giving campaign donations to sitting congressmen.

Anonymous said...
Calling tea partyers terrorists seems to be all the rage. So calling them racists has lost its edge? What next? Brilliant. As brilliant as a mob of crows all piping up with the same caw at the same moment.
8/2/11, 10:06 AM

Rob said...
I'm glad to see you're at least wising up about President Obama.

However, I have a problem with calling Americans who simply disagree with you 'terrorists.'

What would you call the public employee unions and the Democrats in the legislature in Wisconsin physically attacking Republicans, the president himself for holding military families and social security retirees hostage unless he got his way on the debt ceiling ( there's more than enough $$ to pay those items) or the Democrats locking the other party out of the room when writing the stimulus or ObamaCare and then shoving it through by devious means, simply because they had a majority?

It cuts both ways.And using terms like 'terrorist' merely poisons the dialogue. It's rhetoric certain people want to see adopted so they can use it as campaign fodder to fool people again.

You probably won't print this, which is fine.But I merely suggest you do a little soul searching and challenge some of your assumptions.

Anonymous said...
Well, if Obama's the "firewall," then it must be made of soggy cardboard. Obama...the man who caves, and promises to fight hard "the next time around"....and doesn't....

Nocera & Co. remind me of that great Claude Rains line from "Casablanca": "I'm shocked, shocked to find that gambling is giong on here!"

Nocera is shocked, shocked to discover the Tea Party is a Frankenstein monster run amok. Too late, you clueless bastard. Anyone with half a brain could have told you long time back that this would happen if you let these maniacs into the tent....
8/3/11, 2:09 PM
Post a Comment
<< Home
Contact
Home
Email:
brilliantatbreakfast at gmail dot com
RSS