Brilliant Recent Posts
How did it come to this? A Rant.
So much for the "invisible hand"
Politico uses the "T" word
"They have not been elected as dictators of the Un...
Is MSNBC deliberately trying to taint its own brand?
Krugman is getting in touch with his inner Keith O...
Raising the Medicare eligibility age is stupid and...
The Smoker You Drink, The Player You Get
You can never post this enough times
Wednesday Big Blue Smurf Blogging: What They Said 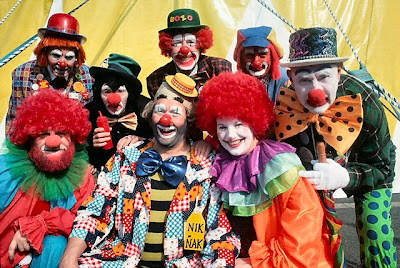 President Obama nailed it when he said yesterday that the debt "negotiations" on Capitol Hill was a "three ring circus." What he could've done was clarify which entities made up the three rings: The House and Senate and the White House.

That's not to say the House and Senate Republicans aren't responsible for most of this ginned-up chaos that seemingly overnight has turned into a very real one. The intentions of the radical wing of the GOP are painfully transparent: Cripple Social Security using whatever fraudulent means necessary, and beginning the dismantling and/or privatization of Medicare and Medicaid through equally fraudulent means.

Republicans know as well as Democrats that if we do indeed default on our national debt by not raising the ceiling by Tuesday, the first of two things will happen: The Treasury will empty itself out paying our creditors and those on Social Security, unemployment and those serving our military will immediately stop getting checks.

The manufactured emergency has already resulted in a partial shutdown of the FAA, which has not only placed 70,000 union workers on temporary hiatus and is making millions for the airlines and airports, but $200,000,000 a week in airport taxes are going uncollected. Hm. Union workers out of work, private industry making millions and nearly a billion dollars in uncollected taxes a month. Funny how Republican initiatives do that, huh?

Yet, I think one would be hard-pressed to find even one Republican on Capitol Hill who's thought this far ahead: How will the GOP continue rah-rahing, sis boom-bahing the three war fronts and the troops who are fighting them after being solely responsible for cutting their paychecks?

I remember when Democrats were threatening to stall military appropriations bills during the Bush era and the Republicans were hoarsely screaming like so many elephants with their balls in a vise about. "The troops, the troops, my God, what about the troops?!"

Fast-forward to 2011: The troops may not get their next checks and be able to continue paying their bills starting next week. Yet, where are the Republican calls to continue funding the troops? Crickets.

Sure, it's painfully obvious the Republican Party and the Teahadists who have taken over a large part of the GOP caucus are hell-bent on destroying this country and destroying the biggest progressive legacies of the past 70-75 years, starting with Social Security and Medicare. But Obama must accept ownership for one of the rings of this three-ring circus.

Obama could've simply defused this situation months ago by invoking the 14th amendment to raise the debt ceiling. Former President Clinton said he would've used it. Obama, also a so-called Constitutional law scholar, claims his lawyers are telling him it wouldn't be legal. Obama keeps treating the 14th amendment as if it's a nuclear option but the fact is it would be more like a neutron bomb that would vaporize this sad, sorry clown show on the Hill while leaving the infrastructure intact. And if the Tea Bag Caucus in the House wants to impeach Obama for using what we all know is his constitutional prerogative, they'll have to explain why they're attempting to impeach a President for simply raising the debt ceiling in lieu of a Constitutional Amendment to balance the budget. They'll have to explain to the rest of us who precisely prevented that Constitutional amendment from passing. And the Tea Bag Caucus will lose whatever little credibility they now have.

Yet from the start, it was obvious that Obama was going to do what Obama always does: Capitulate to the fascist, pro-corporate GOP and immediately put Social Security on the table despite it being responsible for not one cent of the national debt (perhaps someone should remind Obama the $2.6 trillion surplus was obtained through something called "payroll taxes"). He's also put Medicare and Medicaid on the buffet table, despite both programs having rock-bottom operating costs of 3%. With a stroke of the pen, Obama could wipe out the prohibition to the government being able to negotiate drug prices with Big Pharma, thereby helping to reduce that burden by hundreds of billions.

But Obama does what Obama has always done: Sell the least fortunate up the river as he did when he froze pay for federal workers for two years at the same exact moment he authorized the continuance of the Bush tax cuts for the same length of time because the minority GOP was holding unemployment benefits hostage in both houses of Congress. At the same time he did that, he also capitulated to the GOP by allowing Social Security taxes to be cut by 2%. This has had an immediate effect: In the first six months, Social Security has lost $100,000,000,000 from its coffers. Six months ago, there was a $2.7 trillion surplus. Now we're hearing it's $2.6 trillion and counting.

To anyone who's ever balanced a checkbook and kept a checking account register, in order to remain solvent and to stay ahead of the game, you need to be bringing in at least as much as you spend, if not take in more. If you spend more than you generate, you're going to be in trouble with someone at some point. How the GOP can convince so many people that the debt can be reduced to nothing over ten years while lowering taxes simultaneously and to be allowed to advance these lies on national TV several times a day without being seriously challenged is a searing and damning indictment on the stupidity, gullibility and apathy of our once-great nation.

Boehner's watered down political theater of a bill passed in the House a few nights ago but it revealed some very interesting things. First off, 23% of the Tea Party Caucus, including Tea Bagger queen Michele Bachmann, voted against the bill, joining all 188 Democrats who also opposed it. And when the perennially-fractious Democratic Party in either chamber stands perfectly united against any Republican proposal, you know they're on the side of the angels. The vote tally also revealed that 22 Republicans in toto opposed the Boehner bill that everyone knew was doomed to failure (sources close to Congress revealed that even many Republicans who'd voted for it did so while holding their noses).

What I'm saying here, people, isn't brilliantly insightful but these thumbtack observations do get to the heart of the matter:

The Republican Party is fractured and split between those who want to destroy this country and those who want to sell the biggest chunks to China. There are many Republicans who are wide-eyed with terror that this game of chicken played by their party leaders will result in economic catastrophe.

But the leadership is plainly insane and terrified they won't get re-elected next year and one doesn't have to squint very hard to see the hands above the curtain of the puppet show pulling the strings: They belong to the Koch Brothers who'd, with Dick Armey, almost single-handedly created the Tea Party. They belong to Lloyd Blankfein and Jamie Dimon and Rex Tillerson and every hedge fund manager on Wall Street.

And then there's our President, who's plainly terrified of teh crazy of the GOP who are willing to shoot their own hostages so they don't incur the wrath of their puppeteers on Wall Street. And, in spite of knowing that Social Security and Medicare and Medicaid has not contributed to the national debt as has lowered taxes and endless wars, Obama will still put all of us who need those programs on the chopping block, including the 2.5 million active duty servicemembers and retired veterans drawing pensions.

He knows fully good and well our creditors will still get paid off and banks, credit card lenders and other predatory entities stand to make billions off jacked-up APRs and foreclosed homes when these innocent victims will no longer be able to pay their bills because of Republican brinksmanship.

Sure, it's all too obvious that the Republican Party is plainly insane and has turned a ginned-up emergency into a very real one. If this debt ceiling debacle doesn't conclusive prove this Tea Bagging 112th Congress isn't the worst one in American history, then nothing will.

But a large measure of the responsibility also has to be laid at the doorstep of 1600 Pennsylvania Avenue, currently occupied by an administration that seems bound and determined to exceed its predecessor as the worst presidency of all time.
3 comments

Jill said...
Sorry guys, I had to remove this comment. It's just a little too close to the kind of thing that gets one visited by the Secret Service. Please stay away from presidential death advocacy messages, OK? I don't care WHO the president is. Thanks.
7/31/11, 4:04 PM

mandt said...
Sorry Jill, the reference was to the democratic platform espoused by Obama in the campaign and the Grant Park speech. Just shows how far things have deteriorated. We expect further avenues into censorship as time goes by and people become more angry and disparate.
7/31/11, 5:33 PM
Post a Comment
<< Home
Contact
Home
Email:
brilliantatbreakfast at gmail dot com
RSS